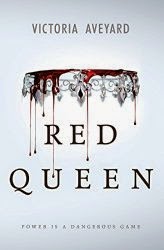 Red Queen by Victoria Aveyard
Young Adult, Fantasy, Dystopian
Ebook/Print/Audio (401 pages, HARPERTEEN)
Graceling meets The Selection in debut novelist Victoria Aveyard's sweeping tale of seventeen-year-old Mare, a common girl whose once-latent magical power draws her into the dangerous intrigue of the king's palace. Will her power save her or condemn her?
Mare Barrow's world is divided by blood—those with common, Red blood serve the Silver- blooded elite, who are gifted with superhuman abilities. Mare is a Red, scraping by as a thief in a poor, rural village, until a twist of fate throws her in front of the Silver court. Before the king, princes, and all the nobles, she discovers she has an ability of her own.
To cover up this impossibility, the king forces her to play the role of a lost Silver princess and betroths her to one of his own sons. As Mare is drawn further into the Silver world, she risks everything and uses her new position to help the Scarlet Guard—a growing Red rebellion—even as her heart tugs her in an impossible direction. One wrong move can lead to her death, but in the dangerous game she plays, the only certainty is betrayal.
Author Site: website

Anyone can betray anyone... (4 stars)

I made the mistake of reading a very negative review of RED QUEEN not long after I had begun it. Because we all have a reviewer/blogger/etc. with whom we tend to share similar opinions I figured I'd give it a look and was shocked that the reviewer vehemently hated it. Naturally, this only made me more eager to finish it and see if I would—as I often do—agree. Alas, while I found a lot of issues with the world building and some plot holes, I still found it an enjoyable read.

As RQ is quite long and quite involved I want to get my major issues out of the way first. In a world where people are literally divided up by the color of their blood I am totally confused how certain characters who pretend to be the other color can pass. Their skin colors/tones would be distinctly different. One of the Silvers is even described as having purple bruises at one point to which I went 'huh?' because anyone with a basic knowledge of what a bruise is would know that silver blood would not make a purple bruise. I found all of the literal biological stuff like this very poorly thought out in terms of basic stuff like that. It was distracting to say the least. My other major issue is the war being waged. There is constant discussion of a war being fought that has seemingly been fought for at least two generations and yet... never any really good explanation as to what is being fought over. Since Reds being sent to fight this war is such a major plot point I found it was info that I really needed if I was going to be sympathetic to the cause of the Reds. While I had other issues beyond those, they were the two big ones I found problematic enough to point out in a review.

The characters were far from being special, they were the same archetypes that YA is awash in, and that was okay with me. I don't mind the comfort of familiar character types. I had really hoped that I was wrong in having seen the 'twist' from very early on, if you've read this type of story before you'll find it sadly predictable. I would have loved to see the author twist it in the opposite direction just for the sake of it being a nice change of pace but at the same time everything that leads the characters up to it does make it extra exciting when it happens.

This is a hard review to write without spoilers so let me just say that unless you're sick of love triangles, characters who are similar to other fantasy and dystopian types, and a plot that, while done somewhat differently, is still the same old song and dance I think it's an enjoyable read. A lot of reviews and early buzz talked about RQ as if it was really original and ground-breaking but it's really not and that's totally okay! Sometimes you just need a really formulaic read. If you love the backstabbing families on GoT, liked The Selection series, found the contrasts of cultures in The Jewel enjoyable, and enjoy a good X-Men comic or film I would recommend giving RQ a read.