Review: One Percenter by D.R. Graham 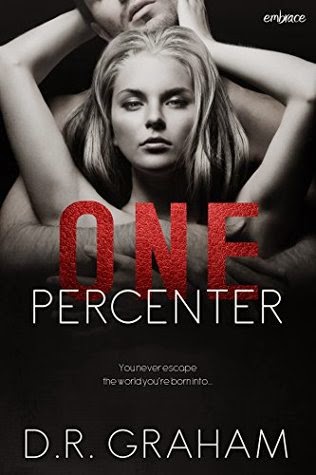 One Percenter by D.R. Graham
New Adult, Contemporary Romance
Ebook (241 pages, EMBRACE)
99% of bikers obey the law. The other 1% make their own...
Eighteen-year-old Tienne Desrochers grew up in the rough world of the Noir et Bleu. Bikers. Outlaws. But after her dad's murder, Tienne decides she's had enough. She refuses to end up like her junkie mom. So she grabs her younger brother and leaves it all behind...including her boyfriend, Aiden Gyllenhall.
More comfortable in the middle of a bar fight than at a country club, living with her wealthy aunt and uncle is an adjustment, to say the least. No swearing. Designer shoes that pinch. And pretty, preppy boys like Leland Crofton instead of super-sexy, tattooed Aiden. But even the upper class can't escape the rancid touch of underworld violence. And this time, Tienne won't just learn who she really is—she'll learn how to fight for what's hers.
Author Site: website

I'd been hearing some behind-closed-doors buzz about ONE PERCENTER what feels like ages ago and I definitely think it was well earned. New Adult doesn't tend to lure me often but the plot sounded too good to resist. Sometimes you just need an angsty read and who better to deliver than a girl who's grown up in a biker family?

Before I say anything about the characters I've got to say that Graham managed to tug the rug right out from under my feet. I thought I had figured out who the funeral at the beginning was for but dang was I off. I should have seen it and didn't, so I was quite surprised which is very hard to do to me with a book. I honestly wasn't even sure where the romance thread would ultimately go because the blurb made it a bit questionable. I think this might be one of the few times when I actually wished I wasn't reading a romance because I kinda liked the idea of Tienne telling both Leland and Aiden to go shove it while she went off and became a famous actress, she's the kind of character who could have and I would have cheered.

Which brings me around to the characters... I liked Tienne a lot, I'm not sure most readers will relate to some of her life experiences but as someone who could I liked that she'd grown strong out of so much bad. Sometimes I thought she was a bit of an idiot in how she treated others or how she chose to handle things but they fit with who she was and she was ultimately true to herself and that made me like her. Leland was really unlikable and I disliked him right away so I was nervous about her relationship with him and yet in contrast I liked Aiden a lot but felt like his choices and eventually where his piece of the story went felt too... well, simple.

While I wasn't pleased with some of the LGBT character representation in OP, I think my issues were minor. Graham is a great storyteller and I will definitely be looking for more of her work in the future. OP was a fast-paced, emotional story that is sure to please NA genre fans and possibly those who like MC romances, though this really isn't one. I'd recommend it for anyone in need of a page-turner with a kick butt heroine who refuses to be anything but her father's daughter.