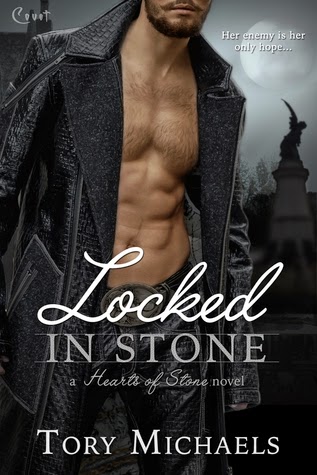 Locked in Stone (Hearts of Stone #1) by Tory Michaels
Paranormal Romance, Gargoyles
Ebook (209 pages, COVET)
Her enemy is her only hope...
Rose Johnson's adoptive mother was murdered, and Rose is next. She may be the last gargoyle in the world—the last being who stands between this world and the evils of Otherworld. In order to keep her existence a continued secret, Rose needs to find the stone that holds her adoptive mother's soul. Which means enlisting the help of her enemies the Sentinels...
Sentinel Cal Levesque never forgave himself for failing Rose's family years ago. Seeing Rose alive is shock enough, until the stunningly beautiful gargoyle attacks him upon sight. As they strike an uneasy peace—and unexpected and escalating attraction—Cal knows he'll have to tell Rose who really betrayed her family. And with Rose's life in greater danger than ever, Cal has a chance to make up for the past...as long he doesn't fall in love.
Author Site: website

I like to call myself the Covet imprint's biggest fan and LOCKED IN STONE—in spite of my rating—is a good example of why. Paranormal romances might be waning in popularity with the band-wagoners who came on when a certain books-to-movies thing happened but die-hard lovers of the genre like me are always ready for something fresh and cool. LIS brings a really neat gargoyles and angels and demons world building set into the genre but I'll admit I felt like the category romance format quashed it a bit. I definitely wanted more out of it than I got.

While I liked the concept and generally most of the book, the romance itself was really unenjoyable. It's billed as an enemies-to-lovers kind of romance but I never really felt like Rose and Cal were enemies, more like they made shaky excuses constantly why they weren't allowed to be together or why she was angry with him. I also found the idea that he was an adult protector of her mother back when she was a little kid kind of squicked me out in terms of them having a relationship. With most paranormal stuff I can get past a certain amount of age difference but there's just something about this particular set-up that made it not work for me. I had to skim the love scenes because they made me uncomfortable.

Now, my quibbles aside, I think it's a pretty interesting concept that really deserved more fleshing out. There were certainly areas I think would have added to the overall story that might not have directly influenced the romance but would have made the series arc more ready for continuation. I really enjoyed the secondary characters, Tom in particular, and hope they'll play into the next pair of stories well.

Overall, I think LIS would be a good place for a paranormal romance newbie who hasn't gone beyond vampires and werewolves to get started. I had my issues with it but I feel like they're in many ways the result of being PNR reader for more than a decade.

I'm a junkie for their Brazen and Bliss lines. I haven't read any of this line I don't think. Even with issues it sounds like a great start to the series. Love that there are gargoyles!