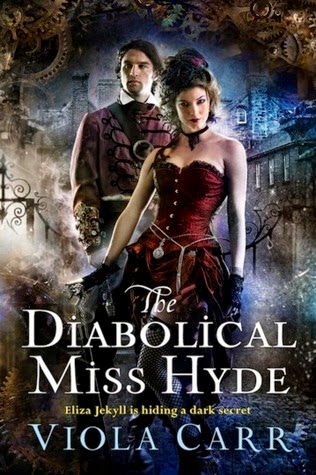 Forensic science, magic, mystery, and romance mix in this edgy steampunk fantasy—a retelling of the horror classic, in which Dr. Eliza Jekyll, daughter of the infamous Dr. Henry Jekyll—pursues a dangerous murderer in an alternate Victorian London.

In an electric-powered Victorian London, Dr. Eliza Jekyll is a crime scene investigator, hunting killers with inventive new technological gadgets. Now, a new killer is splattering London in blood, drugging beautiful women and slicing off their limbs. Catching The Slicer will make Eliza’s career – or get her burned. Because Eliza has a dark secret. A seductive second self, set free by her father’s forbidden magical elixir: wild, impulsive Lizzie Hyde.

When the Royal Society send their Enforcer, the mercurial Captain Lafayette, to prove she’s a sorcerer, Eliza must resist the elixir with all her power. But as the Slicer case draws her into London’s luminous magical underworld, Eliza will need all the help she can get. Even if it means getting close to Lafayette, who harbors an evil curse of his own. Even if it means risking everything and setting vengeful Lizzie free…

We've all done it. Chosen a book for its cover and been thankful the actual blurb sounds good. But how often does that turn 'round on us and bite us in the backside? I was a little afraid that was going to be the case with THE DIABOLICAL MISS HYDE once I started reading because it's quite uniquely written. Imagine having two sometimes conflicting perspectives that are occasionally overlapping. Prim and polite Eliza is almost possessed by her inner bad-girl, Lizzie, in a way that is both intensely frustrating and increasingly delicious as the story continues.

Carr has built a world of magic and science that's rich and spirited in all the right ways. It's dark and tense and populated by characters of questionable motivations that will have you anxiously reading into the very wee hours of the morning in hopes of being relieved. But then she'll sweep the rug from under your feet with surprises. I tend to be a very hard reader to surprise and TDMH managed to get one over on me. That said, if you're not a big fan of steampunk—and I'm not sure I'd really call TDMH such, though it's in the same vein of alternate history—you might find the world building on the tedious side.
While I loved the overall plot (and it's not so much a retelling as a reimagining) it was really the characters who kept me on the edge of my seat. I never knew who was going to pop up with potentially nefarious plans or some surprising piece of the puzzle. Eliza and Lizzie are also interesting and complex, neither is fully as polar from the other as they want to be which I think makes their dynamic exciting and complex enough to make me want to read many more books in which they star.

If you love the depth and vision of Meljean Brooks' Iron Seas series and the dark, reimagined world or Megan Shepherd's Madman's Daughter books you will LOVE this book. When I finished it the first thing I did was race to Carr's website in hopes of finding a release date for the next book and any info on whether Carr has a penname whom I could read in the meantime, alas no word on either. This was definitely one of my favorite reads for 2015 so far.

Viola Carr was born in Australia, but wandered into darkest London one foggy October evening and never found her way out. She now devours countless history books and dictates fantastical novels by gaslight, accompanied by classical music and the snoring of her slumbering cat. She loves history, and pops down to London’s many historical sites whenever she gets the chance. She likes steampunk, and thought it would be cool to investigate wacky crimes with crazy gadgets…just so long as her heroine was the creator of said wacky gadgets: a tinkerer, edgy, with a dash of mad scientist. Readers can follow her on twitter at @viola_carr and online at http://www.violacarr.com.

This book keeps popping up and looks so good, especially now with your amazing review! I've put it on my TBR list. ~Mandie