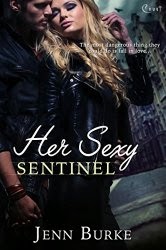 Her Sexy Sentinel by Jenn Burke
Paranormal Romance
Ebook, Print (239 pages, COVET)
The most dangerous thing they could do is fall in love...
Callie Noble fled to Ottawa to escape danger. But she is far from safe. Overwhelmed by a strange new power she can't control, Callie is terrified and painfully incapacitated. Her only hope is to seek the help of the one man who broke her heart...
Derrick Llewellyn is one of the Sentinels charged with the protection of the city's mysterious secret. Seeing Callie again is a shock enough, but the electricity between them is stronger than ever. Still, loving another marked individual is forbidden, and Callie needs his help—not romantic complications.
But there are forces at work in the city, and Callie finds herself inexorably drawn into a world filled with danger and untold magics. A world where loving Derrick isn't just forbidden...it's the surest way to drive them both mad.
Author Site: website

Didn't wow me but I think others are gonna love it. (3 stars)

Who doesn't love a paranormal romance where there's a secret group of guardians living among the rest of us? HER SEXY SENTINEL does a really interesting set-up of just this and I loved that it was set in Canada, which I always find a nice change of pace in the genre. I can't say a lot about it without spoiling the plot but this is a pretty cool mythology to read and I think it would appeal well to urban fantasy fans who have an interest in romances too.

In spite of at times feeling like Callie bordered on the dreaded too-stupid-to-live heroine trope I also found that I didn't dislike her... just her choices. She's been dealt a pretty tough hand to play and that she doesn't immediately run with what others are telling her. Derrick I found harder to like. I think I will be in the minority here but his Alphaness was a little obnoxious and he was making stupid choices as well. Together, their chemistry wasn't as energetic as I'd have expected considering the forbidden nature of their attraction.

If you tend to read a lot of paranormal romance this story is going to be pretty predictable but well executed. Even though I wasn't overly wowed by HSS I think if there were more stories with this world building I'd be inclined to pick up another. I liked Burke's voice and would probably be inclined to read more of her work if it was paranormal in nature.

Check this book out if you liked: