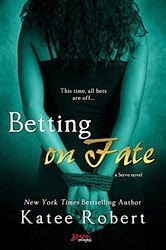 I'd been a fan of Penelope since her mention in MEETING HIS MATCH and then her cameo in MISTAKEN BY FATE. She's driven, intelligent, and exudes a sexual confidence that I wish more romance heroines had. Her relationship with Will before this book isn't so much enemies as competitors and I love a good romance where the couple have that streak of conflict that gives push and pull.

I'll admit, I really did not like the idea of Pen (a dominant) being pushed into a submissive role. In fact, I almost put the book down because the very idea of it made me furious. But since it's fiction and the lifestyle isn't my own, I trusted Robert not to destroy a character for me like that and read on. Thank goodness! While I was still a bit bugged by the dynamic and how it affected Pen's life it ultimately made for a very good romance. Like his brother, Will had some issues with relationships to work through and I really wanted he and Pen's HEA more than I have a book couple in a really long time.

Being familiar with your tastes Anna I think you'll really enjoy it.

Sounds like a good read, added to my wishlist!