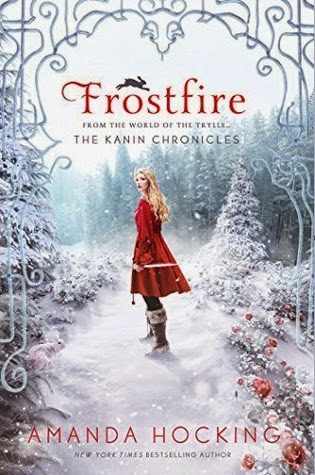 Frostfire (The Kanin Chronicles #1) by Amanda Hocking
Young Adult, Fantasy
Ebook, Print, Audio (336 pages, ST. MARTIN'S GRIFFIN)
Hidden deep in the heart of a snow-covered wilderness lies the secret kingdom of the Kanin—a magical realm as beautiful as it is treacherous…
Bryn Aven has never fit into Kanin society. Her blond hair and blue eyes set her apart as an outsider—a half-blood unable to hold a respectable rank. But she’s determined to prove herself as a loyal protector of the kingdom she loves. Her dream is to become a member of the King’s elite guard, and she’s not going to let anything stand in her way…not even her growing feelings for her boss, Ridley Dresden. A relationship between them is strictly forbidden, but Bryn can’t fight her attraction to him. And she’s beginning to think he feels it too. Meanwhile, there’s an attack on the kingdom—one that will test Bryn’s strength like never before. Finally, she has the chance to confront Konstantin Black, the traitor who tried to kill her father years ago. It’s up to Bryn to put a stop to him before he strikes again. But is she willing to risk everything to protect a kingdom that doesn’t accept her for who she really is? And when her mission brings her closer to Ridley, will she be able to deny her heart?Author Site: website

Awww man, I don't even know where to start with this one... this was actually my first book by Hocking and I came into it with the assumption that because it was a spin-off series it would work well enough that I wouldn't need to have previously read the Trylle trilogy. Unfortunately, I never quite felt like the author wasn't holding back information that I needed to quite get what was going on or that characters who came up weren't ones who probably had useful storyline from the previous books in this world.

Complicating the issues with feeling like information was missing was Bryn herself. I've read many a novel with a heroine who was hard to like but Bryn was the worst I have ever encountered. She's sullen, she's wishy-washy, and she's bitchy. One minute she's pining over her boss, whom is several years her senior and the next she's got some creepy thing the villain. I've never been so confused and squicked out over a character's love life as I was here. Ugh. She was just so unlikable and since she's the narrator I was ready to give up at more than one point but ultimately I stuck it out.

I really did like the general idea of trolls and this sort of world within our world concept that Hocking has created. If it hadn't have been for so many issues with Bryn and the way it felt incomplete I think I might have liked it a lot more. Because of that I'm going to recommend a pass on FROSTFIRE unless you've already read the Trylle trilogy. Even then I'm not sure the way it ends will not frustrate readers as intensely as it did me. Unsatisfying doesn't even cover it.

The cover IS gorgeous. I read the Trylle series years ago. At least the first two I think. Maybe I will like it since I know what is going on?

That's definitely possible Mandie. I checked out some other reviews after I wrote mine because I was afraid I'd be the only one who didn't like it and a lot said it was slow. I felt the same way but it would have been okay if I'd liked the characters more.