Hi Lucy, congratulations on your debut novel, TWO ALONE IN DUBLIN! Thank you for being here today and letting us get to know you a little.
So far, you're a little difficult to track down information on so could you tell us a little bit about yourself? (ie. where you're from, how long you've been writing, what you do for fun, etc.)

Hi and thank you! I am brand-new to the romance and erotica scene, hence the lack of info about me. (That or I’m a glamorous spy who’s adopted a new identity; I’ll let you decide which is true!)
I am a thirty-year-old woman from Ireland—born and raised in a small town, not unlike one of my main characters, Susie Green, from the book. I’ve been writing since I was a nipper (Irish parlance for “small person”!). I was always the “weird” kid who struggled to make friends; writing gave me an outlet to express myself and to be myself.
I still spend a lot of my spare time writing these days. I’m also a big music nut—I love rock, metal, and alternative—and I’m a film lover.

You write lesbian and bisexual romance and erotica. As a reader I've never seen a reason not to read romances that stray outside of my own sexual orientation. To me, love is love, but I've often found that there's much more emphasis on Gay (male) romance amongst Hetero female readers. Whom do you hope finds your stories and what would you say to encourage those who might be hesitant to read erotica and romance outside of their own sexual identity?

I love your attitude—and, as someone who identifies as bisexual, that feeling of “love is love” is how I’ve always defined my sexuality and romantic interests.
I hope that lesbian and bisexual women will find my stories and see people they recognize in them. That would make me very happy.
I also hope that straight women will check out other genres of romance and erotica, like lesbian romance for a couple of reasons.
One: For a long time, a lot of gay (male) romance and erotica was taboo; now it’s read by all different types of readers around the world. I think that situation has come about in no small part because a small group of readers encouraged other readers to take a chance on a genre they might never have considered. As word of mouth spread, the genre exploded in popularity.
Two: It would be personally gratifying to see women put their sexuality (at least) on a par with gay men’s. I think, in both my straight and lesbian romantic and sexual encounters, my understanding of myself and my turn-ons has increased the more I have read about and been exposed to women having and enjoying fulfilling relationships and sex. I’d be happy to think that something I wrote—or at least something in the lesbian or bisexual genres—could encourage other women to have and expect good relationships and sex. 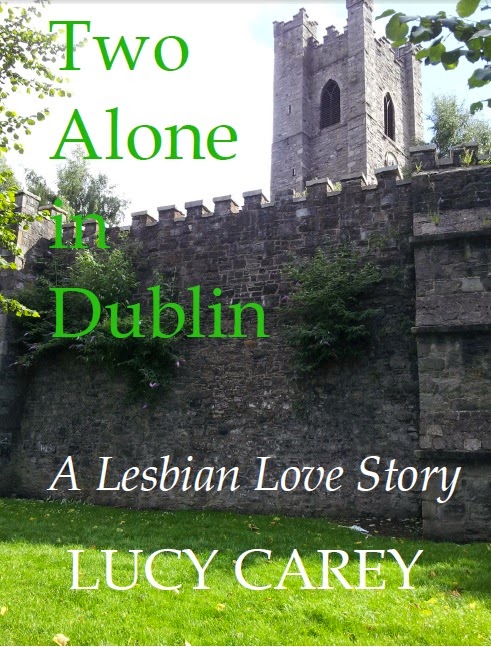 It sounds like your heroines are from very different worlds. Why did you choose the contrast of Irish and Brazilian cultures?

I very consciously chose to make Susie an Irish woman—and one from a small town at that. I had considered softening her Irish voice and, indeed, the Irish voice of the narrative, because I had been advised that American-style voices sell better.
In the end, though, I wanted to be true to myself and to put an Irish lesbian into the world who was believable and realistic, rather than the “fiddle-di-dee” version of Irish that is too common. I really hope that people enjoy having a different (out-of-the-ordinary) voice to read.
Similar reasoning motivated me to make Mariana Brazilian. Though admittedly she is a beautiful woman, I wanted to challenge the typical caricature of Brazilian women you see in a lot of popular culture, which reduces Brazilian women to their looks. She is, I hope, clever, funny, interesting, and well-rounded in addition to being attractive.
And though the two heroines, on the surface, are from different worlds, when you get down to the important stuff, they’re actually quite similar in a lot of regards. It’s why they’re so good for each other.

Thanks again for visiting with us today, just one more question, what's next for you? (In terms of your writing).


Thanks for having me today! I really enjoyed chatting to you.

Surrounded by one million people in Dublin city, two women feel very alone. One a university student from a small town in the Irish countryside, the other an adventurous spirit from a city in Brazil, they've both been searching for the other among the irritations and noise of everyday life...

Mariana hadn’t worn this shade of lipstick in an age. She painted the brash, bright-red gloss around her full lips, rubbed her lips together and pouted. This was her going-out colour, a colour guaranteed to make her feel sexy and confident and womanly.

Had it really been so long since she had been on a date? she wondered. Despite this being her go-to colour for dates, it had been buried in the bottom of her makeup bag.

She checked her teeth for lipstick and, finding none, stepped back to look at her full reflection in the mirror.

She had chosen a form-fitting dress in a colour to match the shade of her lipstick and she adjusted the cups of her bra, to push her cleavage higher in its V-neck.

This, she thought to herself, must be what Susie had described as “putting your best foot forward.”

Purchase your copy of TWO ALONE IN DUBLIN: Amazon

I am a 30-year-old bisexual author who writes the kind of fiction I think other LGBTQ women want to read.

As someone born and raised in Ireland, let me assure you: our country is beautiful…and so are its women.

I aim to introduce you to the best of both—the stunning scenery of the Emerald Isle and its funny, complex, gorgeous, lesbian and bisexual women. I hope you enjoy it.

Thank you very much for the interview. It was one of my favourites of the whole tour. :)

I'm so glad you enjoyed it Lucy! I'm the worst at interviews but I hoped it would be easy to answer and that my readers would check out your book thanks to how well I think you answered. ;)

You're far too modest! Thanks again. :)

This is so far, the best question that I've read!You write lesbian and bisexual romance and erotica. As a reader I've never seen a reason not to read romances that stray outside of my own sexual orientation. To me, love is love, but I've often found that there's much more emphasis on Gay (male) romance amongst Hetero female readers. Whom do you hope finds your stories and what would you say to encourage those who might be hesitant to read erotica and romance outside of their own sexual identity?