Mind traveler Chandra Lamar is on the run, not only from her post-catastrophic dystopian government but from a past she can’t remember. A psychic vision pushes her to recall her purpose for being, but it’s a ghost that awakens her desires for a life she fears she’ll never have. Both push her to remember the past because it threatens what she wants in the now; the Nodin men.

Andonis Nodin battles to accept his failures. The heavy burden nearly breaks him when he can’t save a loved one from the grim reaper’s grip and questions his desire for Chandra, the woman he blames for the death around him.

Nikias finds true love with Chandra in his arms, but is desperate to stop her from seeking revenge on a mission he knows is a one way trip.

Ortello knows for them to recapture the love they once felt for each other, he must be willing to let her go. But overcoming his obsession to make Chandra his and his alone isn’t easy.

Will Chandra go through with the vengeance in her heart or give it up for love? Who is the powerful woman in her haunting visions and will those revealing apparitions crumble her world with the Nodin clan? Does Chandra find true love in the arms of the Nodin men or does her Phantom Desire forever own her heart?

Chandra’s heart swelled with life. She teased back. “Are you blackmailing me into kissing you?”

“Never.” His clear gaze pierced hers with renewed life. “One would have to have something on you first and I don’t…yet. But if it works, I’ll work like hell to turn something up to hold against you.” He smiled suggestively. “Especially, if it means I’ll be able to get a kiss on command.” 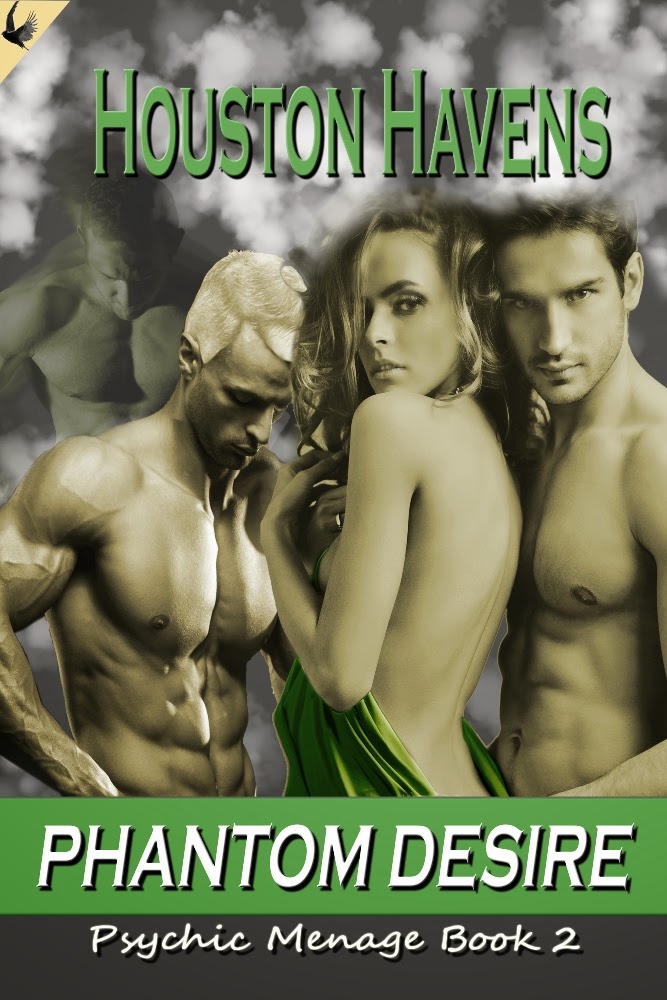 It would be a long time before either one of them felt normal again, but this was a start to their healing. She leaned forward. An old, yet familiar feeling tingled at the center of her chest when he dropped an admiring gaze to her breasts before his stare made it back to her eyes.

“Shame on you, Nikias.” She leaned back, giving him an impish grin, forgetting for just a moment the sadness in her heart. “Taking advantage of a situation like this.”

“Me?” His playful expression was one of mocked shock. “I had the distinct feeling you were trying to seduce me.”

“I’m not the one sitting here half naked.” She glanced down at the telling sign of arousal in his workout shorts. She arched an accusing brow at him. “Looks like you’re a subscriber to the belief sex is a good way to help one find one’s way out of the black hole of grief.” She ran her tongue over her bottom lip with a suggestive sweep. With a hungry look in his eyes, his glance stalked the path her tongue took, leaving a wet trail for him to follow over her bottom lip. Nikias’ chest pumped in shallow takes, telling her she captured his interest.

“Hmmm, I hadn’t heard of the theory.” His sexy voice rumbled from his chest. His pupils dilated when she sucked her tongue back into her mouth. He met her stare with a knowing glint. “I’ll have to try it.”

Stop by for a visit and leave a comment at Houston's Blog.

Houston *Waves at the Goddess Fish*

You had me at ménage! Love it!

Love Houston's books! So happy to hear the next one will be out sooner! Looking forward to reading it!

Great excerpt, so looking forward to reading this one.

This one was even better than the first - which I LOVED.