Covert op partners Astrid Scarre and Kane Langford click on a level that defies logic. Astrid wants to say yes to the sexy Kane. But the guy who stole her heart and then shattered her soul twelve years ago shows up. Seeing the Dragon magus, Zannis, again ignites a wild physical attraction, but doesn’t eliminate her simmering hatred. Astrid is torn between her physical need for Zannis and her emotional connection to Kane.

Kane will never turn his back on Astrid, even when she gets inducted into the Scimitar magi, an organization he knows well and respects. His gorgeous ex-spy partner might push him away at every turn, but that’s too bad. He’s exactly the man she needs to protect her life and her heart. All he has to do is convince her that when something feels this right, you don’t let it go. 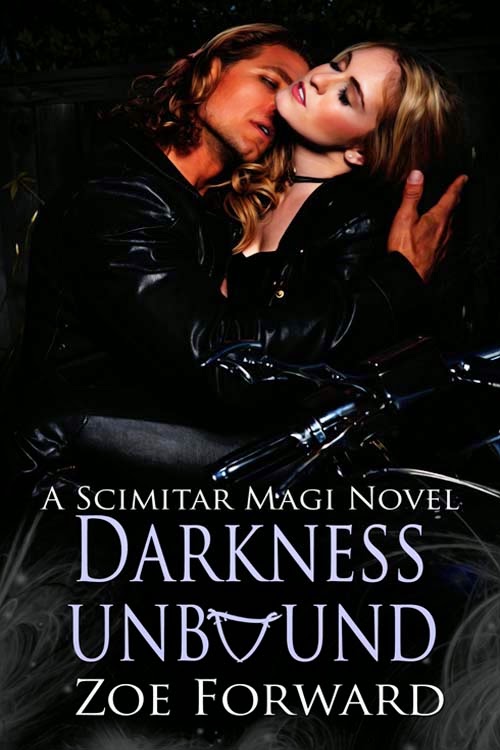 Kane stared wide-eyed, giving her a head to leg once-over, not once but twice. His right fist massaged his five o’clock shadowed chin, and then combed through his spiky blond hair. He remained mute with a dumbstruck expression. Finally, he choked out, “Whaa...”

She suppressed a smile. A feminine thrill hit her stomach. She could count on one hand the number of times a hot, ex-Ranger, super spy found her brain- stuttering attractive. Once.

She and Kane had danced the edge of get-it-on or keep-it-professional for several years, ever since a post- mission alcohol overindulgence led to an unforgettable kiss. She had slammed on the brakes, terrified of ruining their working relationship. She’d murmured to him, This is crazy. He’d whispered, I know what I want. And I want you. The thump-thump those words ignited in her previously deadened heart escalated terror into panic. She’d been running ever since.

Zoe Forward is a hopeless romantic who can't decide between paranormal and urban fantasy romance. So she writes both. In addition to being a mom to one rambunctious kindergartener and wife to a conservation ecologist who plans to save all the big cats on the planet, she’s a small animal veterinarian caring for all the small furries, although there is the occasional hermit crab.

When she’s not typing at her laptop, she’s tying on a karate belt for her son or cleaning up the newest pet mess from the menagerie that occupies her house. She’s madly in love with her globe trotting husband of ten years and happiest when he returns to their home base in North Carolina.