I’m so happy to present an excerpt to the readers of RhiReading of my new release The Shadows of Stormclyffe Hall, a spooxy, sexy modern paranormal gothic romance!
Meet Bastian- the Earl of Weymouth, the last of a long line of aristocrats in a dying line. His family has fled his ancestral home Stormclyffe Hall and he’s determined to come back and restore it, despite the rumors of it being haunted…
Meet Jane- the American Grad student suffering from nightmares of a murder on the cliffs by Stormclyffe. Under the pretext of her doctoral thesis, she’s determined to get her hands on primary research material to find out what really happened at Stormclyffe two hundred years ago when the Weymouth family was cursed.
When Bastian and Jane kiss, the ghosts rises up from their graves.
The excerpt below is where Bastian and Jane have spent an evening together and the barriers that they put up to protect their hearts are crumbling fast.

“I wanted to…” He finally met her gaze. “I wanted to thank you for the kiss. I haven’t been kissed like that in many years. It shouldn’t have happened though.” He pushed away from the door, and after a moment, he walked toward her, a look of determination hardening his features momentarily. With his every step drawing him closer, her breath hitched, and she clung to the hangings for support. When he was mere inches away from her, he simply stared at her face and then focused on her mouth as though the answers he sought were there. She licked her lips nervously as sharp hunger spiked through her. Would he kiss her again? Would she lose herself anew in his embrace?
“Why?” she asked. 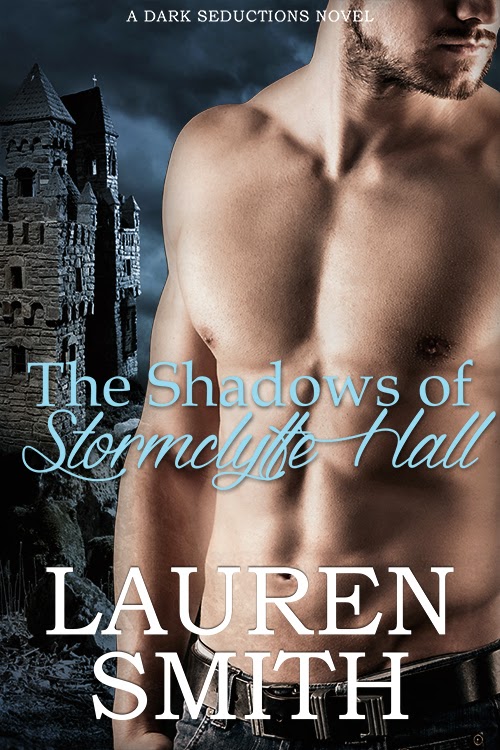 He ignored her question. “Who are you, Jane? Who are you really?” His whispered question made her shiver. She didn’t know the answer herself. He trailed the back of his knuckles over her cheek, and another shiver rippled through her, like a pool of water disturbed by a stone cast into its depths.
“Who am I? I don’t know…not anymore.” She was Jane, but she wasn’t Jane any longer. The more she was around him, the more she felt she was changing. Like the coastline by Sandsfoot Castle ruins, her sense of self was altering with the force of Bastian’s presence, which pounded at her like mighty waves. They would shape and form each other and become something new, only she wasn’t sure what that would be. She simply knew that she belonged with him, wherever he was.
But he didn’t want her, wouldn’t have anything to do with her. Every time he touched her, he reminded her it was wrong, that they shouldn’t do it. Then why did he keep coming back to her? It didn’t make any sense, and she knew logically she shouldn’t want him either.
He lowered his head and feathered his lips along her jaw, and her lashes fluttered as pleasure and need fueled each other until her skin was burning.
“You are a mystery to me.” His words rumbled against the sensitive skin of her neck as he pressed his body into hers, pinning her to the bedpost. “You’re an American, but you act as though this place is in your blood. I see your love of my home shining in your eyes, even as you fear its darkness.” He stole a brief, hot kiss before continuing. “You look like her, Jane. Did you know that? When I first saw you, I thought you were Isabelle come back from the dead.”
His hands cupped her shoulders, fingers tensing. “I thought I’d gone mad, believing such nonsense, and then I gave in and kissed you, and we…” His mouth trembled as he kissed her again, this time deep but too brief. “It’s as if the past is repeating itself …” He shook his head ruefully. “What does it matter? I want this. I want you, even though I shouldn’t.”
She opened her mouth to deny him, but no words were there. His mouth came down hard on hers, and she was caught in the tide and pulled away from the safety of the shore.

To defeat a dark evil, they must face his family’s past…

Bastian Carlisle, the Earl of Weymouth, doesn’t believe in ghosts. Even though tragedy and mysterious hauntings have driven his family away from his ancestral home, Stormclyffe Hall, he is determined to restore the castle to its former glory. His plans are disrupted when a stubborn American shows up on his doorstep hoping to pry into his family’s tragic history.

Jane Seyton, an American graduate student, is convinced there’s more to the tragedy of Stormclyffe Hall than history claims. Ever the scholar, she is determined to discover the truth, even if it means putting up with the arrogant, yet sexy, Bastian.
Although Bastian wants nothing to do with the pushy American, it soon becomes clear that something evil is in the house—and that something is targeting both Jane and Bastian. The two must join forces to purge the ghosts of Stormclyffe Hall once and for all—even as they try to fight a physical attraction between them that grows more and more impossible to deny.

Lauren Smith is an attorney by day, author by night, who pens adventurous and edgy romance stories by the light of her smart phone flashlight app. She’s a native Oklahoman who lives with her three pets—a feisty chinchilla, sophisticated cat and dapper little schnauzer. She's won multiple awards in several romance subgenres including being an Amazon.com Breakthrough Novel Award Quarter-Finalist and a Semi-Finalist for the Mary Wollstonecraft Shelley Award. Sign up for Lauren's newsletter at the bottom of Lauren’s website!