Blog Tour: ENNARA AND THE BOOK OF SHADOWS by Angela Myron [Excerpt + giveaway!]

This post is part of a virtual book tour organized by Goddess Fish Promotions. Angela will be awarding a the winners choice of one of the following prizes (international giveaway -- All photos used from Etsy shops that she plans to purchase the gifts from. Actual gift will be sourced from winner's country and will likely look different for international winners):

1.  Dragon earcuff. A tiny dragon that wraps around your ear just like Ennara's wraps around her wrist! Ennara would not approve.

Or the winner may choose something from Ennara Swag (if they live in the US).

When strange accidents start happening around thirteen year-old necromancer Ennara and her friends, she must search for the mysterious stolen artifacts causing the attacks while learning the highest form of magic--the spells that could prevent the fruition of a terrible prophecy.

“You haven’t much time,” Formult said, glancing again at the door. He crossed to the far edge of the dome and opened a huge glass panel. The winged horses enthusiastically trotted to the edge of the roof, and the griffins took up the rear.

The professor patted Snowflake’s neck. “I’m fairly certain I saw the book when I was in Dordonne. That is, I saw the Bishop of Dordonne with an odd-looking book in the Royal Court. It was my last clear memory before the spell… Anyway, when you find the bishop, I believe you’ll find that book.”

Ennara had heard of the Bishop of Dordonne once before, but where? She shook her head. Now they had two clues to look for—the crypts, and the bishop. Maybe hunting down the Book of Shadows was something they could do, after all.

Formult clapped Snowflake on the hindquarters and stepped aside. She leapt from the door and into the air effortlessly. Ferrus and the two griffins followed.

“Take good care and don’t worry about us,” Formult called after them. “We’ll have the school straight by the time you get back.”

The horses ascended as the door to the aviary burst open. The two druids from the hall tumbled forward. They quickly assessed the scene and raised their wands to the flying creatures. Smoos crouched to pounce and Formult unfurled his whip.

“Let’s get out of here!” Kithe yelled.

Without further instruction, the pegasii and griffins pounded their muscular wings and lifted them away. Galdurlan retreated, quickly becoming a tiny village, then a bay, and then an island alone in a cold, dark ocean. Ennara wrapped her cloak tightly and pulled her hood up as she settled into Snowflake’s rhythmic flight. The air grew icy, and she leaned into the horse to share its warmth. Beside her, Cinne did the same, resting her face against Ferrus’s dark mane.

Gevin and his griffin flew slightly above and behind the pegasii, to the left. His bright green eyes shone from behind his heavy black hood. He was enjoying the flight as much as she. Kithe rode his lion-eagle ahead of the other. He’d bundled himself up in his hunter green cloak and smiled as he gazed into the distance. The hilt of the Sword of Gisilfrid glinted on his shoulder.

From the tiny castle on the retreating island, a screech tore through the air, then another. Two tiny black objects rose in pursuit. Then another, larger object. Two larger objects. The tattoo on Ennara’s hand prickled. Her stomach grew queasy. They would not be let off the island without a fight. Long necks and massive wings pulled the large creatures into the sky. Dragons. 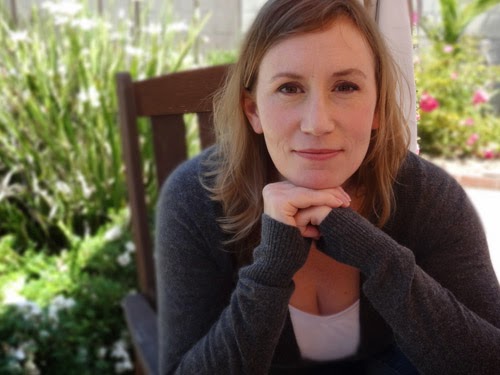 Angela Myron was born in Vancouver, Canada in 1973. She grew up in the piney forests of southern British Columbia, studying tiny blue bells, dodging hidden cacti, and creating fantasy worlds in her back yard. She loved to imagine lands of fairies and goblins, then invite friends over to introduce them.

Angela studied biology and professional writing at university, starting her degree at the University of Victoria in Canada and finishing it at San Francisco State University. She wrote grant proposals for nonprofits, technical manuals for software, and freelance journalism before writing fiction.

Thanks so much, Rhianna, for featuring Ennara and the Book of Shadows on Release Day! To celebrate, it's only $0.99 for the next week. Happy Halloween!