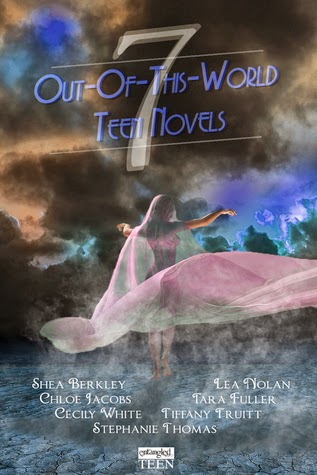 Seven Out-of-this-World Teen Novels (Entangled Teen)
Young Adult, Fantasy, Paranormal, Dystopian, Romance
Ebook (2350 pages, ENTANGLED TEEN)
SEVEN NEVER-BEFORE-BUNDLED NOVELS FROM SEVEN FABULOUS YA AUTHORS
Fans of teen paranormal romance won’t want to miss these seven full-length novels. Whether falling for the boy next door, a reaper out for souls, or a genetically engineered superhuman, these romances keep readers turning the pages and swooning until the very end.
The Marked Son by Shea Berkley
When Dylan sees a girl in white in the woods behind his grandparents’ farm, he knows he’s seen her before…in his dreams. Only he can save her world from an evil lord—a world full of creatures he’s only read about in horror stories. Worse, the human blood in his veins has Dylan marked for death…
Inbetween by Tara Fuller
It’s not easy being dead, especially for a reaper in love with Emma, a girl fate has put on his list not once, but twice. Finn will protect the girl he loves from the evil he accidentally unleashed, even if it means sacrificing the only thing he has left…his soul.
Greta and the Goblin King by Chloe Jacobs
Four years ago, Greta fell through a portal to a world where humans are the enemy. Now a bounty hunter, she’s caught the attention of the darkly enticing young Goblin King, who invades her dreams and undermines her will to escape. But Greta’s not the only one looking to get out of Mylena…
Conjure by Lea Nolan
Twins Emma and Jack Guthrie hope for a little summer adventure when they find an eighteenth-century message in a bottle revealing a hidden pirate treasure. But when it unleashes an ancient curse, Emma has no choice but to learn hoodoo magic to undo the hex on her secret crush, Cooper, all before the last days of summer—and her friends—are lost forever.
Luminosity by Stephanie Thomas
Beatrice had her first vision at the age of twelve, and now the Institution depends on her to keep the City safe from the Dreamcatchers. But Beatrice has a secret that could put everyone in danger. A secret that could kill her and everyone she loves. The enemy has been coming to her in her dreams, and she might be falling in love with him.
Chosen Ones by Tiffany Truitt
The government, faced with humanity’s extinction, created the genetically engineered Chosen Ones. When Tess begins work at a Chosen Ones training facility, she meets James, and the attraction is immediate in its intensity, overwhelming in its danger. Can she stand against her oppressors, even if it means giving up the only happiness in her life?
Prophecy Girl by Cecily White
Amelie Bennett was born to slay Crossworld demons. Until her new trainer, Jackson, shows up, and the chemistry between them explodes. Now she’s trying to thwart the pesky prophecy that foretells his death by her hand. Shouldn’t be too difficult. Getting it done without falling in love…that might take a miracle.
Publisher Site: website

Some of Entangled Teen's BEST YA Stories Collected (5 stars)

Since its inception Entangled Publishing has striven to publish both great romances and great books for teens. As a reader of both I have become a die-hard fan of the publisher but have been particularly pleased with the amount of fantasy and paranormal coming out under their Entangled Teen imprint. when I found out that seven of those titles were being collected into one boxed set I was so excited because while I had already read four of them, the other three were all titles I'd been interested in. I'm a bargain hound by nature so I love a good bundle!

For the sake of not making this the longest review ever please enjoy a few snippets from my reviews of the four titles I've already read.

THE MARKED SON by Shea Berkley, For years Dylan Kennedy has been the victim of his mother's romantic whims. When she once more up-ends his life hauling him to Oregon his life changes even further.  She brings him to her parents' sheep farm, to meet the grandparents he's never met, who don't even know he exists. Ever different, but not sure why, Dylan's chance encounter with a mysterious ghostly figure in the woods begins an adventure to find his destiny. There's a lot going on in THE MARKED SON. Action and romance, magic and shapeshifting, sword-fights and tree surfing. Tree surfing you say? Yes, tree surfing.

Chapters alternate between Dylan's first person accounts and third-person parts about Kera (his love interest). In a way it worked to endear Dylan to me and at the same time it made me feel alienated from Kera. I liked the concept more than the execution and some readers might find the switching back and forth between perspectives bothersome. On the whole I think this is a great modern fantasy with a strong romantic thread but enough action to entertain both male and female readers. There are a few emotional moments and if you can get past the moments of lead characters goo-goo eyeing I think it'd even be a great read for many adults who enjoy non-epic fantasy. I would definitely recommend this one to fans of The Iron Fey series or Aprilynne Pike's Wings. (5 stars)

GRETA AND THE GOBLIN KING by Chloe Jacobs, From the get-go I really liked Greta. She's a survivor and the sort of big sister I always tried to be with my little brother. The terror of her situation is pretty palpable from the beginning. In contrast, Isaac is mysterious and alluring but Jacobs never quite gives enough away to satisfy and that works well to keep you turning the pages. If this were just another YA fantasy romance we could stop there but this is very much an adventure with unexpected twists and the introduction of secondary characters that will have you rooting for them too. The world building is fabulous. Being in the midst of a chilly winter world where everyone wants to kill you on a regular day and goes full-on berserker monster at the full moon is just the sort of imaginative stuff I love.
On the whole it was a book I devoured and knew once I saw the last page approaching that I'd be hankering for another. If you enjoy Julie Kagawa's strong female protagonists and Jordan Dane's great secondary characters this is one I think you will love. (5 stars)

CONJURE by Lea Nolan, The Guthrie twins, Emma and Jack, love spending their summers visiting their dad in the South Carolina Lowcountry. Days at the beach with Jack's best friend, Cooper Beaumont, are what summer is all about. But when the trio come across a strange bottle buried in the sand that contains clues to a hidden pirate treasure the mention of a curse just seems silly. Until Jack uncovers the treasure setting off the ancient Gullah curse known as the Creep. With Jack's flesh rotting from his bones, the threat of Cooper losing his soul on his 16th birthday, and demon dogs trying to keep them from breaking the curse Emma's summer is going to be far from ordinary.

Even without the curse and hoodoo the trio of Emma, Jack, and Cooper would have been fun to read on some other kind of adventure. There was a distinct realism to them that made them jump off the page. But throw in the curse, and mystery, and magic and BAM!... what an adventure. (5 stars)

CHOSEN ONES by Tiffany Truitt, At sixteen-years-old Tess has seen her father taken away, watched her mother lose all desire for anything but alcohol, and her sister die for love. In a world where women can no longer bring forth children science has found a way to create the ultimate breed of warrior, the Chosen Ones. Now children are no longer born, they're grown in labs to protect what's left of the human race. The eldest daughter of each family must spend three years serving at the academies where the Chosen Ones are grown and trained and with her sister dead Tess must take her place.

A thin thread of romance gives this dystopian debut something to keep readers going through an adventure into a futuristic world that's peppered with angst. While not unlikable, CHOSEN ONES, does suffer from some flaws that made it a difficult read. Dystopian world building requires a lot of questioning details and frequently I found it unraveled into territories where it wasn't making sense. There's a lot of telling the reader how the government is in control but very little showing. What little does get shown only stirs up more questions as to how they've reached the point they are in control. What made it enjoyable for me was James. Tess can be a bit bratty and even a little selfish, but their growing relationship makes for some really interesting growth for them both. If you liked Lauren Olivier's Delirium I think you'll love CHOSEN ONES. They had similar complications for me as a reader and I was in the minority in my disliking of it. (4 stars)

Overall, I think this is an outstanding collection of Entangled Teen's best titles with romantic themes and paranormal, fantasy, and dystopian elements. The four I had already read were ones I had given 4 and 5 star reviews on and the other three are all well reviewed and rated as well. I would highly recommend this bundle as a great way to start each of these series—each of these titles is the first book—while saving money!