I bet you…that at some time in your life you’ve gambled on something. Done the lottery, played the slot machines, dropped a cool million at the roulette tables in Vegas…

According to Wikipedia, gambling is:

“the wagering of money or something of material value (referred to as "the stakes") on an event with an uncertain outcome with the primary intent of winning additional money and/or material goods. Gambling thus requires three elements be present: consideration, chance and prize.” 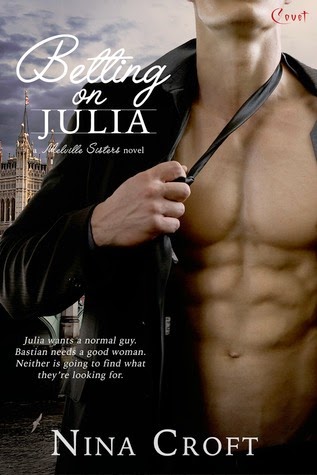 Gambling can be innocent fun, like my mum going to bingo with her friends once a week. Or it can be a dangerous addiction—I googled “gambling” and the numerous help hotlines that came up shows the extent of the problem.

Thankfully, I’m not really a gambler; I’ve never played poker or roulette, (though I would love to visit Vegas one day) which is just as well as I have quite an addictive personality. But even I’ve gambled occasionally, and here are a few of the ways:

·         At the races. We lived in a town called Ayr, in Scotland, for a while. It had a race course and I loved going and watching the horses and would always have a little flutter. I never won though—probably because I tended to pick my horses based on how pretty they were rather than on how fast they could run.

·         I used to do the weekly lottery when I lived in the UK and even now, we do the Euro lottery, but only when the jackpot is over 50 million (because my husband says it’s not worth it below that).

But really, all life is a gamble. Every time we make a life-decision we are, to some extent, gambling on our futures, because nothing in life is certain. There are always consideration and chances and “prizes.” Sometimes the stakes are relatively low, like deciding whether to wear that sexy new outfit to work. Sometimes they are high—like saying “I do” to some guy who may or may not love you for the rest of your life.

Though of course there are ways to turn the odds in your favor.

Like me, Sebastian Crane, the hero in my latest release, Betting on Julia, isn’t really into gambling. But unfortunately he has an acquaintance—a very close acquaintance—who is. Poor Bastian has been possessed by a demon, Dante, for two hundred years, and Dante loves to gamble. Usually, the bets involve Bastian cage-fighting, and the “prize” if he wins, is a week of peace from the demon. If he loses, Bastian has to indulge in a week of fun demon-style (Dante is into kinky sex and extreme violence). Bastian never loses.

But in Betting on Julia, Dante has upped the stakes. He’s offered to free Sebastian forever and return to the Abyss where he belongs. And all Sebastian has to do is get a “good woman” to say the words, “I love you.” And mean them.

For once, Sebastian doesn’t think the odds are in his favor; he doesn’t consider himself all that loveable. But he doesn’t have a choice—he’s losing his soul to the demon.  Unfortunately,there’s usually more to Dante’s bets than initially obvious. And Sebastian is soon in danger of not only losing his soul, but his heart as well.

So what’s a big gamble you’ve made in your life? Either a real “bet” or just taking a chance on something? Let me know and I’ll egift two commenters with one of my backlist books of their choice.

Book Synopsis:
Small, blonde, bubbly, and with a penchant for all things pink, Julia Melville has always considered herself a nice girl – until she was attacked by a werewolf. Months later, and still in total denial, Julia spends the time between full moons fantasizing that her life is normal. And who could be better to help her with that than her new neighbor, handsome accountant, Sebastian Crane.
For two hundred years, Sebastian, a powerful warlock, has been possessed by a demon. Each day, his soul grows darker, and he knows that soon he will be beyond salvation. But the demon loves to gamble, and he’s made Bastian one final bet—get a good woman to say the words “I love you” and he’ll be free.
Julia wants a normal guy. Bastian needs a good woman. Maybe together they can find something far more valuable…redemption.

Author Bio:
Nina Croft grew up in the north of England. After training as an accountant, she spent four years working as a volunteer in Zambia, which left her with a love of the sun and a dislike of nine-to-five work. She then spent a number of years mixing travel (whenever possible) with work (whenever necessary) but has now settled down to a life of writing and picking almonds on a remote farm in the mountains of southern Spain.
Nina writes all types of romance, often mixed with elements of the paranormal and science fiction.
Website | Twitter | Facebook | Goodreads | Newsletter

Wonderful post! Since I come from the land of gambling, Las Vegas, Nevada, I so understand where you're coming on.

And the story is wonderful! So glad to see it out.

I'm a Vegas girl--we've been there several times. I don't particularly gamble (I don't like to lose!) but that place just calls my name ;)