I know a lot of you readers who visit are pretty much romance-only readers and that's cool but if you ever read something else what genre do you go to?

See... I've always thought romance shouldn't be its own genre. To me it should be a sub-genre of others. Yeah, I hear your outraged gasps but hear me out, please.

While fiction is certainly an escape I feel like romance is only a part of a broader story IRL and that when I get into the shelves at a book store or library that's what I would rather see. I think romance as a its own genre is just stupid because it takes something that's a part of other things and just forces it to be something separate. (I hope that makes sense). I think if it was just a sub-genre of other genres it wouldn't get looked down on as much.

"Oh hey I was just reading a great epic fantasy last weekend you should totally try it. The sister mages are trying to find a portal to the underworld."

"Yeah? I'm working on a fantasy romance and the characters are on this quest that's really bringing them together when they started off as enemies. Loving it!"


That's the kind of conversations I want to be having when I'm an old lady. Don't see it happening but it's just like the reason I feel like the term 'women's fiction' is wretched. I hate the idea of things (and books in this discussion) being forced into pigeon-holes that claim a gender bias.

Yeah, my mind has been on gender and feminism a lot this week. Sorry for going there for this weekend's weekend reading but it ties into the book I'm starting this weekend. 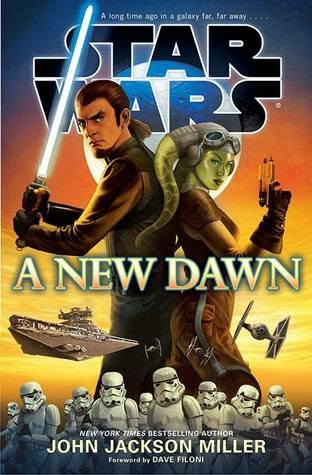 You see... I hate the way gender plays into the marketing of scifi and fantasy stuff. I've always been super girly-girl and yet very boyish at the same time so it should come as no surprise that my own daughter is the same. So I'm perfectly okay to wear ripped jeans and beat up sneakers with a super girly top and makeup. Which is one reason I get so frustrated when it's nearly impossible to find Star Wars stuff geared toward girls. I want shit to reflect my nerdy passions without sacrificing my feminine side's craving for pretty things. (I know I'm not the only one either).

Even the marketing for Tuesday's A NEW DAWN has felt pretty dude focused. I was honestly surprised I got approved for the ARC. In fact, if I'm completely honest I wouldn't even be a romance reader or blogger or probably even a mom if I hadn't been loaned a Star Wars book when I was a teenager. My love of SW grew out of what's known as the Expanded Universe and lead to me connecting with the people I'm closest to in my life, including Mr. Rhi. So here's hoping that with a new trilogy of films in the works, the new cartoon series, and so on... maybe they'll start marketing smarter and giving female fans merchandise that features female characters.

Anywho, I had best be off if I plan on brushing my hair before I go hang with our Friday night nerd bunch. I've been juggling RL stuff and blog stuff for the next week and somehow the evening has crept up on me, darnit. I'll be looking to see what you're reading over the weekend (a long one if you're a fellow US reader) so please leave me a comment on what you're reading and feel free to trash my thoughts according to your own opinion on romance as a stand-alone genre. ;) -- Rhi
Posted by Rhianna at 8/29/2014