The Demon on the Cover

The main players in the Demons of Elysium series are Belphagor—a cardsharp, thief, and master gambler—and Vasily, a muscle-bound firespirit whom Belphagor calls his “malchik”: Russian for “boy.”

But Belphagor and Vasily, who graced the covers of Books 1 and 2, don’t appear on the cover of Book 3, Master of the Game. That honor goes to Silk, whom I can only describe as a sort of male “femme fatale” of the Demon District. Silk, like his name, is exquisitely smooth. He plays everyone from time to time, even Belphagor, which is no small feat. It comes as second nature to him, born of self-preservation.

Each of the demons in this story grew up on the streets, surviving the best way they knew how. Like Russia after the fall of the Soviet Union, Elysium is full of such street children. Both Belphagor and Vasily began careers as rent boys while they were in their teens, choosing that path for various reasons, but choosing it voluntarily. Silk is one of the “Lost Boys” who never had that choice.

If you haven’t read Book 2 in the series, King of Thieves, I don’t want to spoil anything else for you, except to say that Silk obviously plays a significant part, since he’s on the cover of Book 3. What I will say is that readers and reviewers tend to be leery of Silk. They seem find him fascinating, but they don’t trust him. And with good reason.

Even I don’t entirely know whether to believe this character half the time. That may sound like an odd thing to say; I should know everything about him, right? I created him. But let me share one of the secrets about writers: we’re not always in control of our own creations. Most of the time, they take us along for a wild ride, leading us on a merry chase right to the end.

But even though I may not have Silk completely figured out, he’s one of my favorite characters to write. If you’ve seen the BBC series, Orphan Black—and if you haven’t, OMG, what are you waiting for? Go stream it now—imagine the character Felix Dawkins (played brilliantly by Jordan Gavaris) for a moment without the British accent. (Or what the heck, imagine him with it. Who’s to say what kind of accent they have in Elysium?) His mannerisms and his look are very much how I picture Silk.

At other stops on the tour, you’ll have opportunities to read about more of the Demons of Elysium—and perhaps even an angel or two—along with chances to enter my giveaway to win a diamond accent winged demon heart necklace and a $25 gift card. 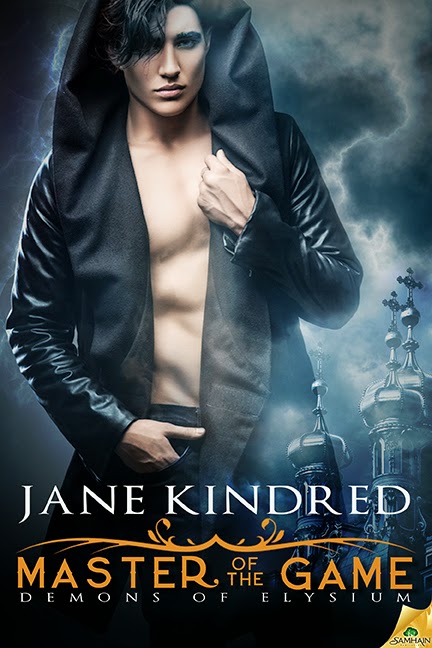 Love is the ultimate game changer…and this time it’s winner take all.
Now that his lover is back in his arms, Belphagor is taking his own sweet time to say the words Vasily longs to hear: “You’re my boy.” And savoring the sweet torture of driving the firespirit into a frenzy of unfulfilled need.
As the undisputed master of Heaven’s gaming tables, Belphagor never plays unless he’s certain of winning. But this time, political machinations send the game—and Vasily—tumbling to the brink of even his formidable control.
Vasily can’t deny enjoying their delightfully edgy play—until the airspirit auctions him off for a night to the one demon with a gift for taking things too far. Seductive Silk, tight-lipped about the end of his relationship with the sweet submissive Phaleg, may also be involved with a new faction threatening the pregnant queen of Heaven.
Belphagor couldn’t be less interested in the games angels play, but when angelic and demonic intrigues overlap, he’s drawn in against his will. And forced to break his one inviolable rule: Never gamble what you can’t afford to lose.
Warning: Contains more than a mouthful of m/m ménage, with intense D/s situations featuring intricate rope work, balaklavas, and a flurry of snow.
Add to Goodreads
Purchase links
Amazon | Barnes and Noble | iBooks |
About the Author

Jane Kindred is the author of The House of Arkhangel’sk trilogy, the Demons of Elysium series, and The Devil’s Garden. Born in Billings, Montana, she spent her formative years ruining her eyes reading romance novels in the Tucson sun and watching Star Trek marathons in the dark. She now writes to the sound of San Francisco foghorns while two cats slowly but surely edge her off the side of the bed.

Thanks for having me on the blog today, Rhianna! :)