I am so very excited about this box set!! 12 novels from amazing authors for the low price of $3.99 and the best part is that the proceeds will benefit World's Ocean Day. Its on sale for the next month (June 8th-July 8th), so make sure you pick it up soon!!

Ocean’s Deep Synopsis and Author Info:
OCEANS DEEP - Twelve Young Adult romances that celebrate sun, sea and love. All proceeds from this this collection of novels will go to support World Oceans Day 2014. On sale from June 8 - July 8 2014.
Comprised of twelve full length young adult romance novels in a variety of genres including science fiction, fantasy, contemporary and mythology, the books all have one thing in common: they leave readers more in love with the ocean than they were before.
The proceeds from this box set will benefit World Oceans Day through TheOceanProject.org, the charity organization for this global event dedicated to celebrating the ocean and encouraging people to think about why conservation must be important to them.
Authors and books in the box set:
Lani Wendt Young – Telesa
About Telesa: An island of secrets. A girl on fire. An epic battle of the elements. Can love truly conquer all? A thrilling love story inspired by Pacific mythology - featuring a sinister sisterhood of beautiful women with an environmental agenda and a fiery yet vulnerable young woman who must master her gifts - before they destroy her and all those she cares about.
About Lani: Samoan Author, Blogger and Writer of Pacific Stories.  I am the author of five books and the blogger of "Sleepless in Samoa'.  I write stories about strong, vibrant Pacific women ( and the tattooed men brave enough to love them)- contemporary stories inspired by our Polynesian mythology and a touch of X-Men comics.
Elle Strauss – Seaweed
About Seaweed: A teen swim athlete discovers a merfolk world that threatens to keep her out of the ocean forever.
About Elle: Elle Strauss is the best selling author of otherworldly YA fiction.  A married mother of four, Elle divides her time between BC, Canada and Dresden, Germany. She enjoys drinking coffee and eating chocolate in both places. She also writes upper YA/adult mixed genre romance as LEE Strauss. Visit Elle at www.ellestraussbooks.com
Kristen Day – Forsaken
About Forsaken: Seventeen year old Hannah spent her childhood wading through countless foster families until finally being adopted by a wealthy family from Georgia. Unfortunately, Atlanta’s high society wasn’t quite ready for Hannah… or the strange events that plague her.
About Kristen: Author of the YA/PN Daughters of the Sea Series! Lover of sarcasm, Sharpies & pixie sticks. Obsessed w/all things vintage. Sweet tea addict. Wife. Closet ninja.

Karen Amanda Hooper - Tangled Tides
About Tangle Tides: Yara Jones doesn't believe in mermaids--until she becomes one and opens the gateway to a love that's deeper than the oceans.
About Karen: Karen was born and bred in Baltimore, frolicked and froze in Colorado for a couple of years and is currently sunning and splashing around Florida with her two beloved dogs. She's addicted to coffee, chocolate and complicated happily-ever-afters. www.KarenAmandaHooper.com
Amber Garr - Promises and Betrayal
About Promises and Betrayal: Promises: Sometimes following your heart can end up destroying the ones you love.
Betrayal: Life as a mermaid can be suffocating.
About Amber: Amber Garr spends her days as a scientist and nights writing about other worlds. Born in Pennsylvania, she lives in Maryland with her husband and their furry kids. Her childhood imaginary friend was a witch, Halloween is sacred, and she is certain that she has a supernatural sense of smell. Amber is a multiple Royal Palm Literary Award winner, author of The Water Crisis Chronicles, The Syrenka Series, The Leila Marx Novels, and the upcoming Death Warden Series. When not obsessing over the unknown, she can be found dancing, reading, or enjoying a good movie.

Cheri Lasota - Artemis Rising
About Artemis Rising: What if your name was your destiny? And what if that name foretold a tragic end?
About Cheri: Artemis Rising was a winner in the Chanticleer Cygnus Awards and a finalist in the 2012 Next Generation Indie Book Awards. Can’t get enough of Arethusa’s world? Learn more about the characters, story, and the Azores Islands here. If you’d like to keep up-to-date with Cheri’s publication news, sign up for her newsletter here. Cheri is a techno-dweeb and darn proud of it. She dabbles in video editing, ebook design, coding, gaming, gizmos, gadgets, tablets, and apps. Currently, Cheri is a full time freelancer focusing on Fiction & Nonfiction Editing, E-Book & Print Design, Web Design, and Book Marketing Consulting. She is also founder of AudaVoxx.com, which aims to help listeners discover and win Audible audio books. Along with her award-winning debut novel, Artemis Rising, Cheri has published her second novel, Echoes in the Glass, as well as several anthologies. Cheri also recently released her how-to e-book Design and Upload Your ePub. Cheri is a member of The Indelibles YA Author Collective, Historical Fiction Authors Cooperative, and Willamette Writers.
Heather Allen - Just Breathe
About Just Breathe: Ever Harding must make the a decision that could change her life forever! Will she become a mermaid to be with the one she loves,Jack or will she stay on land with her family?
About Ever: Heather Allen is the author of The Just Breathe Trilogy, Feeling This, The Sound of Shooting Stars and her recently released Let Go about an MMA fighter. Heather finally realized her dream of becoming an author just over a year ago with her mermaid trilogy. She savors every moment on this journey and the wonderful friends she has met along the way. She has many more books planned. Ideas pop up faster than she has time to write.

Nikki Godwin - Chasing Forever Down
About Chasing Forever Down: When seventeen-year-old Haley Sullivan meets a mysterious stranger, she realizes her dreams are within her reach. But when the stranger disappears, she embarks on a journey to find him and finds more than she expected.
About Nikki: Nikki Godwin is a YA/NA/LGBT author. She can't live without Mountain Dew, black eyeliner, and music by Hawthorne Heights. When not writing, she internet-stalks her favorite bands and keeps tabs on surf competitions. Her life goal is to meet David Desrosiers of Simple Plan. Her favorite pro surfers are Jeremy Flores, Gabriel Medina, and John John Florence.
Leigh Talbert Moore - Dragonfly + Undertow
About Dragonfly: Anna Sanders expected an anonymous (and uneventful) senior year until she crossed paths with rich-and-sexy Jack Kyser and his twin sister Lucy.
Pulling Anna into their extravagant lifestyle on the Gulf Coast, Lucy pushed Anna outside her comfort zone, and Jack showed her feelings she'd never experienced... Until he mysteriously withdrew.
Anna turned to her internship at the city paper and to her old attraction for Julian, a handsome local artist and rising star, for distraction. But both led to her discovery of a decades-old secret closely guarded by the twins' distant, single father.
A secret that could permanently change all their lives.

About Undertow: In Dragonfly, Bill Kyser gave Anna the three journals that held the story behind the powerful developer's seclusion and the damaged lives of his family members.
Anna hopes to find a way for Julian to know the truth, but as she digs deeper into the tragic events of the past, she realizes silence could be the only option.
Now she's in an alliance with the man she formerly feared. And if Julian finds out what she knows, she could lose for good the boy she's starting to love.

About Leigh: Leigh Talbert Moore is the author of the popular young adult romantic comedy The Truth About Faking, its companion, The Truth About Letting Go, which is a Top 5 Finalist in the 2013 “Best Indie Book Awards,” sponsored by The Kindle Book Review; the romantic-suspense novel Rouge, which was a Quarter Finalist in the 2013 Amazon Breakthrough Novel Awards; and the Dragonfly series, a new contemporary YA to new adult romantic saga.
Amy Evans – CLICKS
About Clicks: Clicks is a genre blending joyride of twinning, swimming and winning for anyone who loves dolphins, adventure and romance.
About Leigh:  Amy Evans is an author, ocean lover and dolphin mom. She loves to write books  that jump genres and leave readers feeling all lit up inside. CLICKS is her first novel and was nominated for best debut for the Utopya Conference for Young Adult and New Adult books. The sequel, ECHOES, comes out in mid June. Connect with her on g+, twitter, tumblr, and facebook. Or check out her websitewww.amyevansbooks.com.
Cover Design - Starla Hutchon
Interior Design—www.emtippettsbookdesigns.com

Grab your copy of OCEAN'S DEEP at: Amazon | B&N 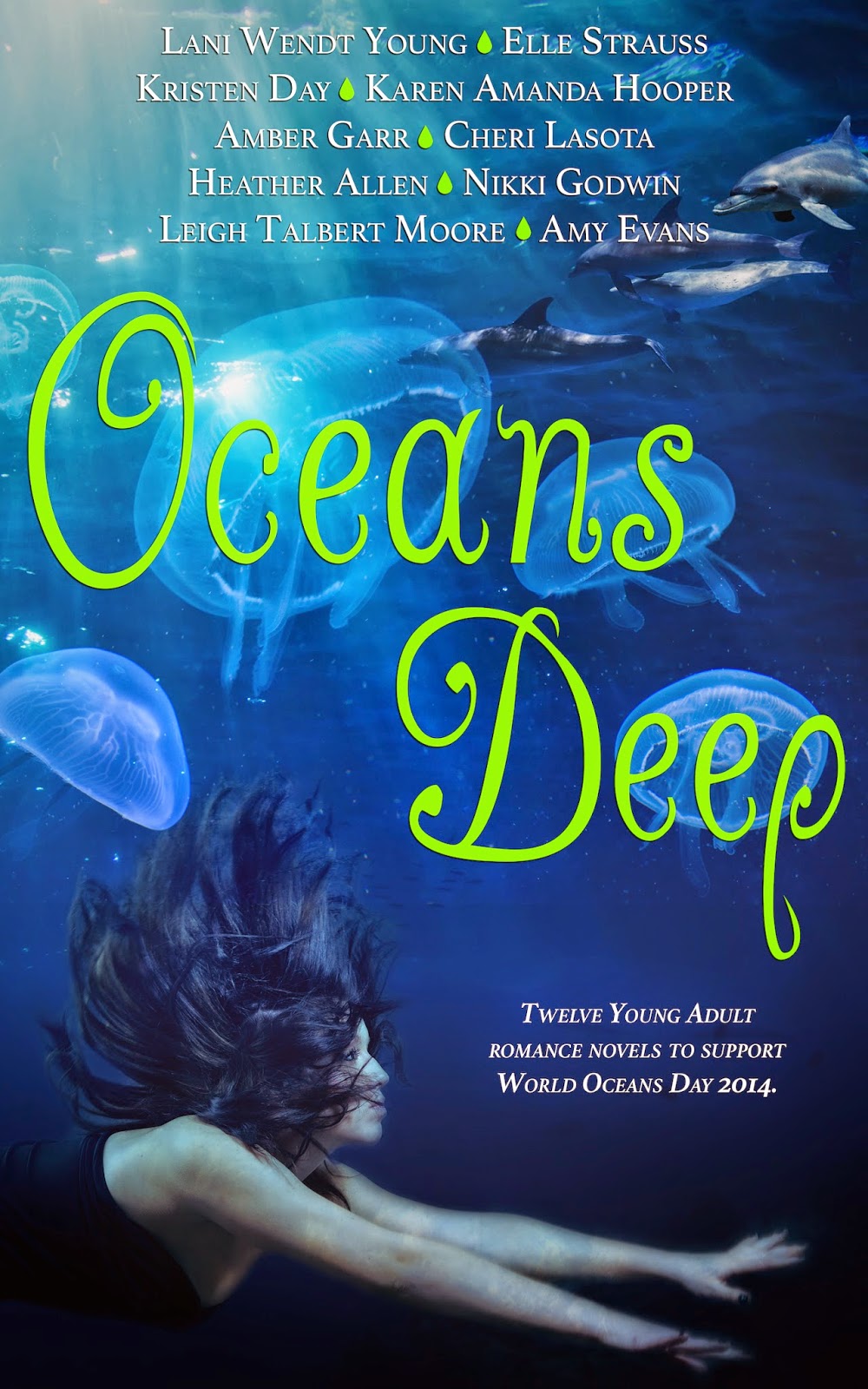