Book Blitz: OUTSIDE THE LINES by Bella Love 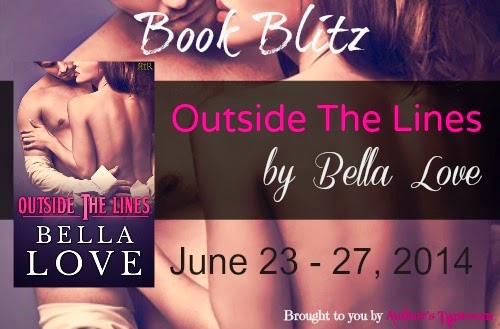 We are so excited to share with you a recent release from author, Bella Love! Her romantic mystery/erotic romance OUTSIDE THE LINES is available now! Find out more about the book below, read an excerpt, and then be sure to pick up your copy today! 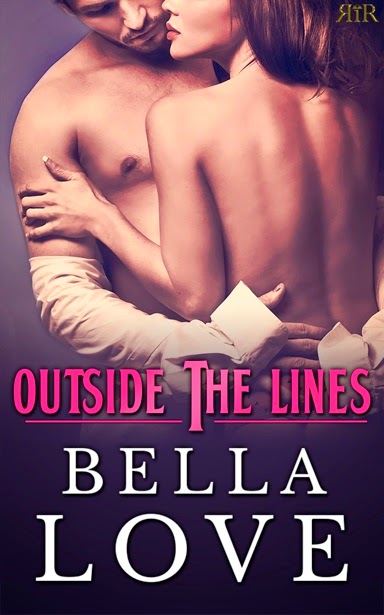 Outside The Lines
by Bella Love
April 22nd 2014

Juliette Jauntie is only scared of one thing—living.  She’s made some mistakes in her past–reckless, impulsive mistakes–but she fought back and now she’s a caffeine-fuelled workaholic who’ll stop at nothing to succeed.  She can handle anything Johnny Danger, her biggest competition, throws her way.  Crushing workload: check.  Insane deadline: no problem.

Former Ranger, Johnny is ruthlessly devoted to Danger Enterprises, the company he’s built from the ground up, his personal triumph over a brutal start in life.  So when Juliette Jauntie blows into his world, with her amped-up energy and furrowed brow and red-painted toenails, and starts asking questions that piss off a lot of wealthy people and threaten the empire he’s built, Johnny knows he needs to stay focused.

Pin her down, get some answers, and walk away.

…Has Never Been So Sexy

But when their sexy showdown blows the lid off an scorching passion,  and uncovers a shocking crime that’s been hiding in plain sight, the trouble mounts and the stakes skyrocket, and Johnny knows he’s in big trouble.

Because with Juliette in the mix, he might lose more than his business.  He might lose his heart.

...I stared down the snow-covered hill.  People shot past me, laughing and having fun.  I eyed them warily, then wiggled my fingers and bent forward at the hips, the way everyone else seemed to be doing it.  Then I straightened.  The mountain was big. Really big.

I bent forward. Then straightened again.

As I stood there, debating whether to try the bending-over step again, someone skied up beside me with a competent-sounding sluice of snow.  It stopped. And stayed. A large, unmoving shadow.

I turned and peered up into the handsome, five-o’clock-shadowed face of Johnny Danger.

“What the fuck are you doing, Jauntie?”

“Holy Mother of God!” I gasped the Catholic cry of alarm from my youth reflexively—guilt was a powerful mnemonic—and leaped backward.  Unfortunately, I was trapped by the skis and couldn’t actually leap anywhere, so instead I tipped over backward and sat down hard, knees bent.

I glared up at the large dark shape of him. “What are you doing?” I demanded.

I scowled. “I’m at the top of a mountain wearing skis, Johnny.  What do you think I’m doing?”

He looked at me doubtfully.  “I have no idea.”

“What are you doing here?” I said again, trying not to look like an idiot sitting in the snow.  “How’d you find me?”

“You told people you were skiing.”

“There are a lot of mountains.”

“You told Roxy you were going to Destiny Falls. This hill’s best for people who don’t know how to ski.”

“What makes you think I don’t know how to ski?” I demanded indignantly.

“I’m psychic.” He reached down and hauled me to my feet.

“But why use your psychic powers on me?” I complained, struggling up. “Why are you here?”

“Because you weren’t at the meeting this morning.”

“But…why would I have been at the meeting?”

“Because I left you thirty-five messages about it last night.  And again this morning.”

“Because my client is pissed.  Because they want this divorce finalized by year’s end, and you’re not answering your phone. Or texts.  Your receptionist isn’t in, your door is locked, and you have a Gone Fishing sign hanging on it.” His gaze was glacial, voice just shy of a growl.

“I don’t have a receptionist,” I muttered as I scrambled for my phone. Was I not getting reception?

“Because reading your valuation is like reading a science fiction novel.”

I slid my gaze up slowly from the phone screen. “Science fiction?”

I felt the stirrings of anger.  Uh-oh.  Stirrings were a bad thing.  I kept myself purposefully unstirred.  And unshaken, for that matter.  I was practically inert.

Except right now, I was starting to feel angry.

“Well, Mr. Danger, I’m very sorry to piss off your client, but perhaps if the information I needed had been provided in the first place, maybe if I hadn’t had such a hard time accounting for all their money—”

“And they’ve got two rental properties—”

“*She* has two rental properties.”

I met his eye. “Which she says he opened. In her name.”

I hesitated. “If Judge Billings did that to avoid some kind of liability himself, well…that might not be legal.”

I leaned closer and said real quietly, like in an old western, “I have some bad news for you, Danger: I’m not too good at following rules.”

He leaned nearer too, so our mouths were extremely close.  Incendiarily close.  “I have some bad news for you, Jauntie: neither am I.  And you’re fucked.  Get ready to explain your valuation in court.”
***