The heroine in my book, QUEEN OF WANDS, is a mouthy smartass woman. Jenny was so much fun to write, because she always has a witty comeback for any situation, and she never quite manages to keep her mouth shut, even when she should.

She’s great because she has this wonderful knack of getting under the skins of the other characters around her. I was going to put together a few Jenny-isms, but then I realized that she rarely uses the same one twice. So, instead, I picked her favorite ways to get under people’s skins.

The first, of course, is her big brother, Boone. When she wants to see the vein in his temple pulse, she switches to a sing-song voice and stretches his name into multiple syllables—“Bo-oo-one.”

Then there’s Ophelia. Jenny loves to call her “big sister” or some variation of it, because Ophelia’s determined not to marry Boone until she’s damn well good and ready. Jenny thinks her holding out is ridiculous, and loves to needle her about it whenever the opportunity presents itself.

And, of course, the hero of QUEEN OF WANDS isn’t exempt to Jenny’s personal brand of joy. Mac is brilliant and he gets under her skin just as much as she gets under everyone else’s. So she uses a variety of nicknames—princess, Sir Genius, cupcake—to put a shield of sorts between them. Or at least that’s the goal.

But Jenny’s totally met her match with this man, and no matter how many barriers she builds, he crashes right through them. It’s a fun show to write them circling each other, and I hope it will be as fun to read it! 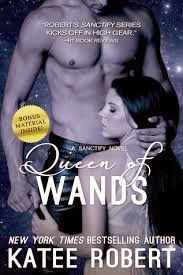 When Jenny O’Keirna gets a chance to slip her older brother’s leash, she jumps at it, even if it means playing babysitter to a too-smart-for-his-own-good inventor. She’s not expecting the attraction that sparks between them—or that Sanctify is just as desperate to take him for their own.
Never in Mac Flannery’s wildest dreams did he imagine Jenny would be the one sent for him. He sees beyond the mad grin the sister of Hansarda’s new king presents to the world, and that combination of vulnerability and wicked humor is a siren call he can’t resist.
But Sanctify is always three steps ahead of them. On the run—and unable to keep their hands off each other—Jenny and Mac devise an insane plan: kidnap the leader of Sanctify, and stop this war once and for all. Unfortunately, they’ve just played right into his hands…

Get your hands on QUEEN OF WANDS:
Goodreads | Amazon | Barnes & Noble | EP

Katee Robert learned to tell stories at her grandpa's knee. Her favorites then were the rather epic adventures of The Three Bears, but at age twelve she discovered romance novels and never looked back.


She now spends her time--when not lost in Far Reach worlds--playing imaginary games with her wee ones, writing, ogling men, and planning for the inevitable zombie apocalypse.