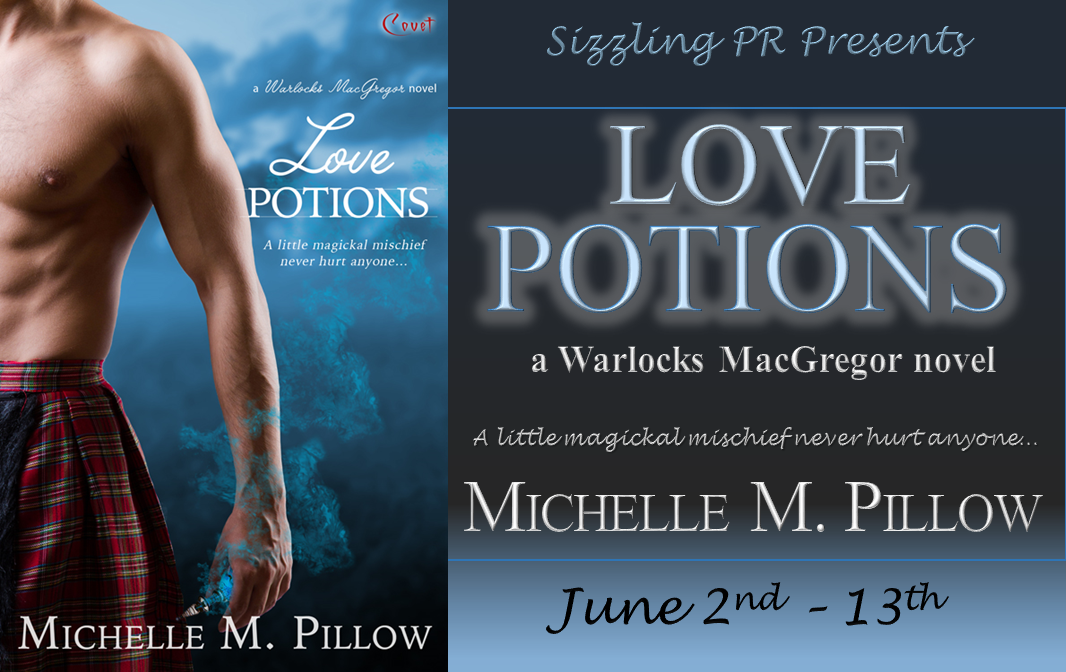 “Ly-di-ah! I sit beneath your window, laaaass, singing ’cause I loooove your a—” “For the love of St. Francis of Assisi, someone call a vet. There is an injured animal screaming in pain outside,” Charlotte interrupted the flow of music in ill-humor.
Lydia lifted her forehead from the kitchen table. Her windows and doors were all locked, and yet Erik’s endlessly verbose singing penetrated the barrier of glass and wood with ease.
Charlotte held her head and blinked heavily. Her red-rimmed eyes were filled with the all too poignant look of a hangover. She took a seat at the table and laid her head down. Her moan sounded something like, “I’m never moving again.”
“You need fluids,” Lydia prescribed, getting up to pour unsweetened herbal tea from the pitcher in the fridge. She’d mixed it especially for her friend. It was Gramma Annabelle’s hangover recipe of willow bark, peppermint, carrot, and ginger. The old lady always had a fresh supply of it in the house while she was alive. Apparently, being a natural witch also meant in partaking in natural liquors. Annabelle had kept a steady supply of moonshine stashed in the basement. If the concert didn’t stop soon she might try to find an old bottle.
“Ly-di-ah!”“Omigod. Kill me,” Charlotte moaned. “No. Kill him. Then kill me.”
“Ly-di-ah!”Erik had been singing for over an hour. At first, he’d tried to come inside. She’d not invited him and the barrier spell sent him sprawling back into the yard. He didn’t seem to mind as he found a seat on some landscaping timbers and began his serenade. The last time she’d asked him to be quiet, he’d gotten louder and overly enthusiastic. In fact, she’d been too scared to pull back the curtains for a clearer look, but she was pretty sure he’d been dancing on her lawn, shaking his kilt.
“Omigod,” Charlotte muttered, pushing up and angrily going to a window. Then grimacing, she said, “Is he wearing a tux jacket with his kilt?”
“Don’t let him see you,” Lydia cried out in a panic. It was too late. The song began with renewed force.
“He’s…” Charlotte frowned. “I think it’s dancing.”
Since the damage was done, Lydia joined Charlotte at the window. Erik grinned. He lifted his arms to the side and kicked his legs, bouncing around the yard like a kid on too much sugar. “Maybe it’s a traditional Scottish dance?”
Both women tilted their heads in unison as his kilt kicked up to show his perfectly formed ass.
“He’s not wearing…” Charlotte began.
“I know. He doesn’t,” Lydia answered. Damn, the man had a fine body. Too bad Malina’s trick had turned him insane. 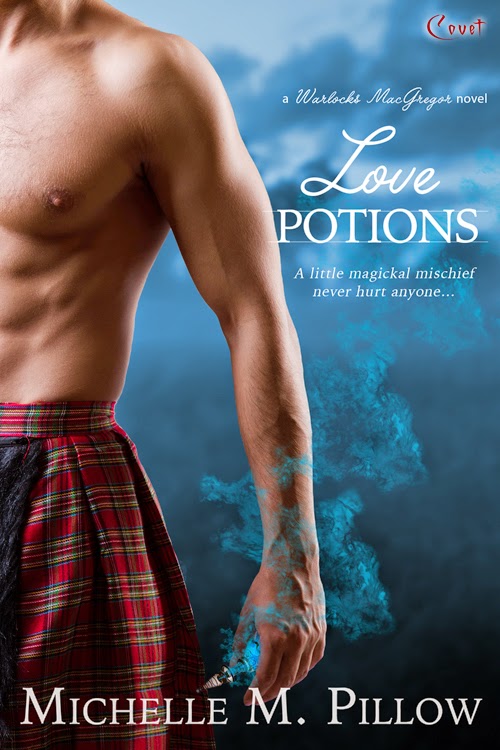 Book Synopsis: Erik MacGregor, from a clan of ancient Scottish warlocks, isn’t looking for love. After centuries, it’s not even a consideration…until he moves in next door to Lydia Barratt. It’s clear that the shy beauty wants nothing to do with him, but he’s drawn to her nonetheless and determined to win her over.
Lydia Barratt just wants to be left alone to grow flowers and make lotions in her old Victorian home. The last thing she needs is a demanding Scottish man meddling in her private life. Just because he’s gorgeous and totally rocks a kilt doesn’t mean she’s going to fall for his seductive manner.
But Erik won’t give up and just as Lydia let’s her guard down, his sister decides to get involved. Her little love potion prank goes terribly wrong, making Lydia the target of his sudden embarrassingly obsessive behavior. They’ll have to find a way to pull Erik out of the spell fast when it becomes clear that Lydia has more than a lovesick warlock to worry about.  Evil lurks within the shadows and it plans to use Lydia, alive or dead, to take out Erik and his clan for good.
Buy Links: Goodreads | Amazon | Barnes& Noble | Entangled

Author Bio: Michelle M. Pillow, Author of All Things Romance, is a multi-published, award winning author writing in many romance fiction genres.  Ever since she can remember, she has had a strange fascination with anything supernatural—ghosts, magical powers, and oh! vampires. After discovering historical romance novels, it was only natural that the supernatural and love/romance elements should someday meet in her wonderland of a brain. She’s glad they did for their children have been pouring onto the computer screen ever since.
Michelle loves to travel and try new things, whether it's a paranormal investigation of an old Vaudeville Theatre or climbing Mayan temples in Belize. She's addicted to movies and used to drive her mother crazy while quoting random scenes with her brother. Though it has yet to happen, her dream is to be in a horror movie as 1. A zombie or 2. The expendable screaming chick who gets it in the beginning credits. But for the most part she can be found writing in her office with a cup of coffee in pajama pants.
She loves to hear from readers. They can contact her through her website: www.MichellePillow.com
http://www.michellepillow.com/
http://www.michellepillow.com/blog/
https://twitter.com/MichellePillow
https://www.facebook.com/AuthorMichellePillow
https://www.goodreads.com/Michelle_Pillow
http://www.michellepillow.com/newsletter/?p=subscribe

Thank you for having me!

You are so very welcome Michelle! It's such a clever idea and hello hot Scot warlocks!