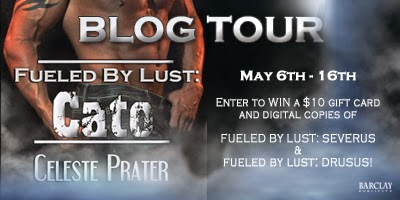 Four words come to mind when you think about Celeste Prater's writing: sinfully sexy sci-fi romance! Packed with plenty of hot, hunky men, humor, and scorching, knee-wobbling sex, Celeste recommends gloves when reading her books. FUELED BY LUST: CATO, the third novel in the Fueled By Lust series, is a steamy tale about Cato’s obsession with finding a woman he’s never met, and claiming her as his own. 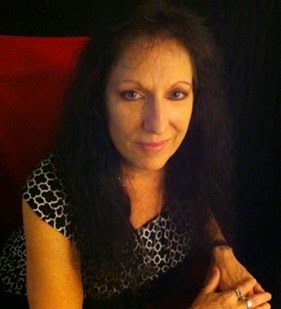 A note from Celeste Prater:

Hey, everyone! Excited to be here to share my announcement of the recent release of FUELED BY LUST: CATO, Book 3 in the Fueled By Lust series. I discovered that everyone wanted to know more about the sexy, fallen angel biker, and tattooed Cato that was so instrumental in Severus’s journey through Book 2, so you’re getting your wish and more with this newest installment.

For those of you that have enjoyed Drusus and Severus’s stories, you’ll get to see more of them in Book 3 along with our unpredictable and lovable Maxim. Ever wonder what happened to the mysterious Ulixes? You’ll get a peek into more activity on these hunky alien’s home world and a particularly crazy scene at the Heat Seekers Male Revue club. Cato’s in for a wild ride and a conclusion that will make your eyes peel wide.

For those of you that are just learning of the series, welcome to my world and please enjoy the sneak peek excerpt from CATO  below. Come meet a group of alpha males that’ll make your toes curl and your breath catch when they whisper huskily in your ear and call you mellis.

Want to learn more about FUELED BY LUST: CATO? Be sure to check out this exclusive interview with Celeste Prater!

Have you wished for a man?
Excerpt from Fueled by Lust: CATO 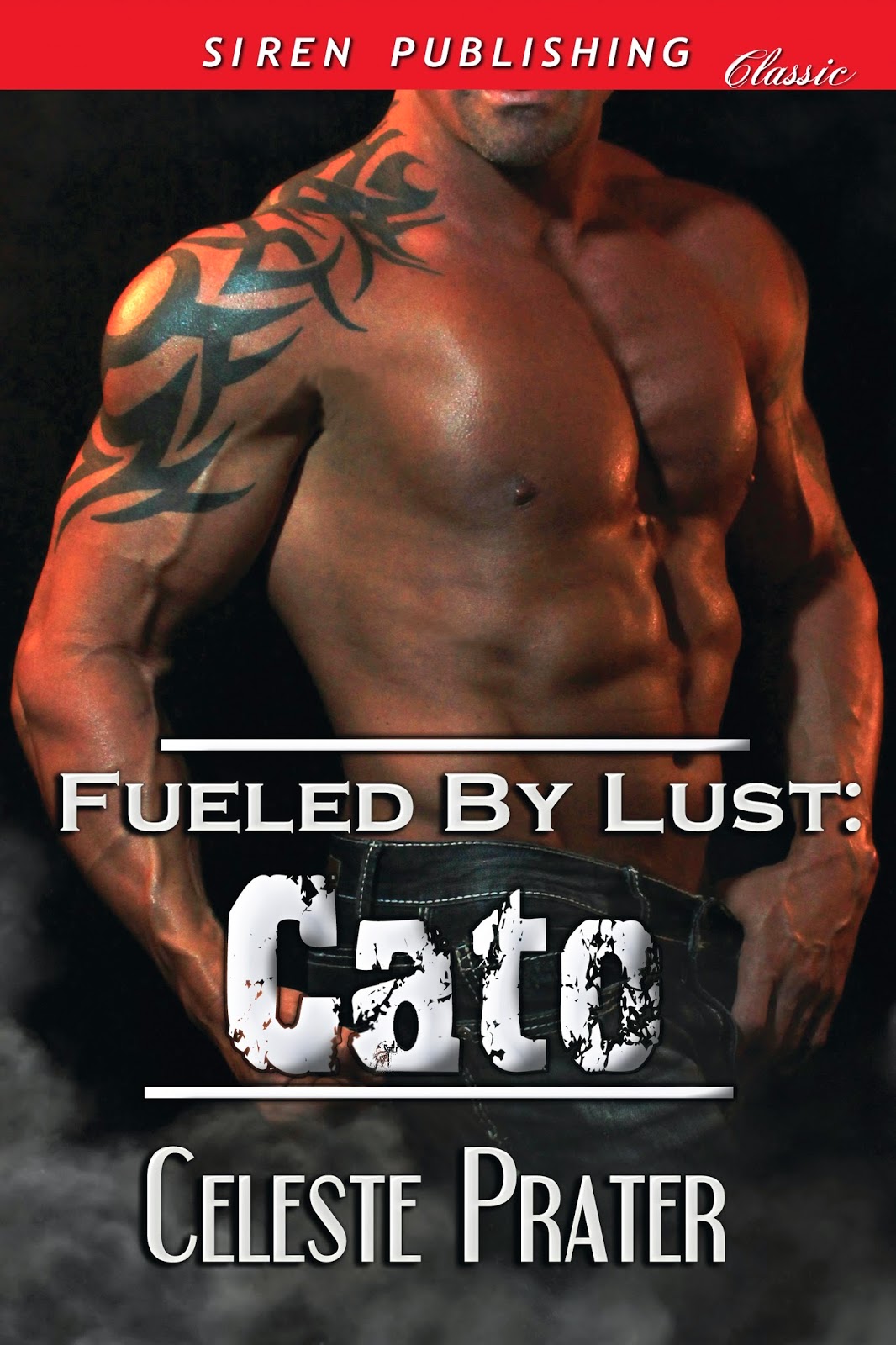 Those deep pools of cerulean blue were narrowed, not in anger, but in a hooded, sensual way. With one sweep of his gaze, she felt naked and exposed. When he unconsciously swiped his tongue along his chiseled lips, she began to tremble. All she could think was how anyone could be that damned good looking and not be an ass of the highest order. He would so get away with it if he were.

Luna felt her breath catch and her heart lose a few beats as soon as he stood up. Even the way he walked toward her screamed sexy, virile man, and she had no hope of escape. She tried to loosen her muscles and appear nonchalant, yet knew her body was in fight or flight mode. She discovered she had no desire to do either. He’d snared her and she was ready to be gobbled up. When he came abreast of her, all false bravado fled as the coward it was, and she dropped her gaze when heat flushed across her face.

The situation was surreal. It was as if the air in the room was a living, breathing entity and was pressing her from all sides. She let loose a small gasp when his warm fingers grasped her chin and pulled her head up. She locked onto his eyes and couldn’t move. A maestro had control of his voice and mesmerized her with the sensual, rhythmic sound.

“Have you wished for a man that would control your pleasure as he saw fit?”

“Have you dreamed of someone that could anticipate your needs from just a simple touch or a whispered cry?”

She sighed softly and bobbed her head in agreement.

“Could you trust someone enough to release your fears and set your pleasure free?”“Yes.” It was a plea and she didn’t give a shit if he knew it.

He leaned down and whispered across her skin. “Tell me, Luna. Have you ever reached orgasm that wasn’t by your own hand?”

She glanced away and answered honestly. “Only in my dreams.”

She brought her gaze back to his and steeled herself to be honest. This was not a time to lose her nerves. “I’ve always had to cause my own orgasms. I’ve only been with two men and it’s never happened for me. I gave up trying.” Luna closed her eyes and shivered as his fingers drifted along her jaw and traveled down her neck. The sensation stopped just above the pulse point on her throat. His breath brushed against her ear, and she was thankful he’d placed a hand on her back or she would’ve dropped to the floor.

“Luna. You have to know that I feel something for you. I can’t give you the measure of it or you’d run from me. I can tell that you’re attracted to me and I’ll take that, for now. It’s in the way that you look at me and how your breath catches when I touch you. Can you trust me enough to explore this together? Can I be the man of your fantasies?”

Enter this tour wide giveaway to win a $10 gift card to Amazon or Barnes & Noble (winners choice, open internationally) plus a digital copy of FUELED BY LUST: SEVERUS and FUELED BY LUST: DRUSUS!
a Rafflecopter giveaway
Posted by Rhianna at 5/11/2014