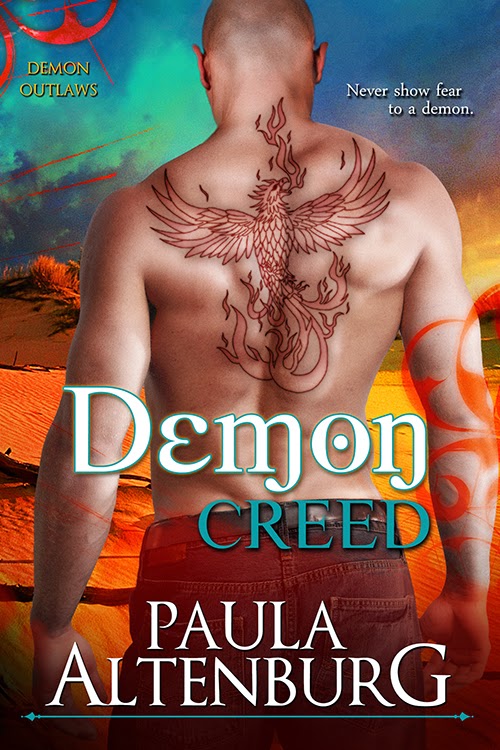 Synopsis: As a highly skilled assassin, Creed is used to being called upon by the Godseekers for help. But in a world just recently rid of demons, the task to now track down half-demons isn't as easy as it seems. Not only is Creed himself a secret half-demon now going against his own kin, but when he discovers numerous innocent children are being kidnapped in the mountains, he second guesses his mission. Justice should be for all, not just for demon spawn. Living in a world of cruel men, Nieve has no memory of her life before her enslavement. But when Creed comes around asking questions about missing children, the memories of her half-demon son - and the demon who tricked her - come flooding back. Now, Nieve will do anything to get her son back...even if it means putting her trust in Creed. Together they set out to find the Demon Slayer who can help them. Little do they know the demon who fathered Nieve's son is also searching for Nieve, and he's teamed up with the kidnapper to draw her out. Creed and Nieve must race against the clock to save the children, their hearts, and the world.

Get your copy of THE DEMON CREED:
Goodreads | Amazon | B&N | Entangled

Author Bio: I’d like to be able to say I always wanted to be a writer, but the truth is I thought it looked like a lot of hard work. Life, however, sometimes leads us down paths we never intended to take.

From the very beginning, my parents encouraged my love of books. When a Grade One teacher suggested I wrote too many “thrillers,” my mother, an English teacher, said I could write – and read – whatever I wanted. My high school English teachers later backed her up on that. In university, I received a Bachelor of Arts degree in Social Anthropology. At the time it was a whim, but it’s amazing how much that little piece of paper has benefited me over the years.Researching the history of civilizations has led to many intriguing worldbuilding possibilities.

When my children were babies and money was tight, my mother, grandmother, and husband bought me an electric typewriter for my birthday because they knew I was bored and wanted me to be happy. My mother became my very first critique partner, willingly reading pages and pages of manuscripts no one should ever have to suffer through. She researched markets for me, and introduced me to a journalist friend, who in turn introduced me to the Writers Federation of Nova Scotia. My brother and my brother-in-law introduced me to Thieves’ World, David Eddings, and Piers Anthony. My sister gave me my first computer.

My grandmothers believed if something’s too hard, you aren’t working hard enough. My brother and sisters have all successfully followed their dreams, and my husband and two sons offer me proof every day that hard work is something to be embraced, not avoided. With these people behind me, how could I possibly stray from a path on which life seems to have planted them as guardrails?

a Rafflecopter giveaway
Posted by Rhianna at 5/29/2014