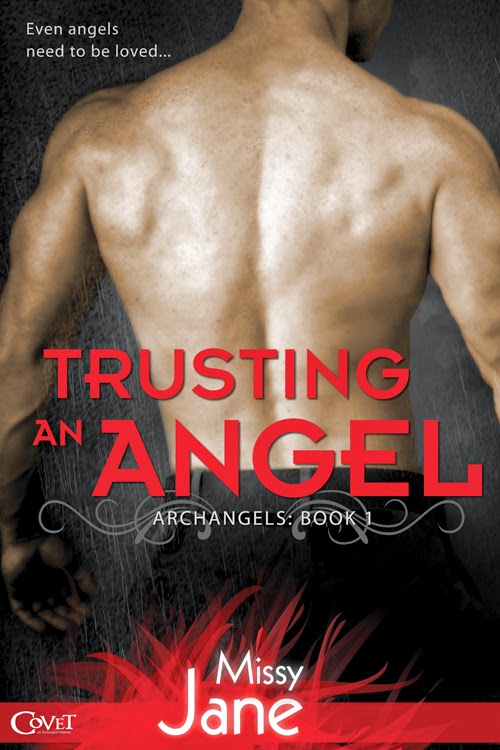 
Book Synopsis:
As the owner of a string of successful nightclubs all over the world, Zerach can have any woman--except for his assistant Isadora O’Donnell. First off, Isadora isn't a one-night-stand kind of girl, and second, her dominating godparents don't approve of him. There's also the fact that he is an archangel with a mission to protect humans from demons, something Isadora can never find out about.
Isadora secretly longs for Zerach’s attention but her scarred body and his playboy ways keep her from acting on her feelings. With her only family on the brink of bankruptcy, she’s determined to help them, even if it means trying to forget Zerach and marrying the womanizing Jake, a man she’ll never love.


Zerach tries to keep Isadora at arm's length, but when a demon starts stalking her, Zerach will stop at nothing to protect the woman he loves. But protecting her could cost him his wings.

Check out my 4 star review for TRUSTING AN ANGEL.

Get your copy of TRUSTING AN ANGEL:
Goodreads | Amazon | B&N | Entangled Page

Author Bio:
Ms. Missy Jane is the alter ego of a Texas mother of four who has been married to the same wonderful man for over sixteen years. A few years ago Missy finished reading a book by Mercedes Lackey and James Mallory, titled The Outstretched Shadow, and thought -Now, what if? -and a monster was created. Missy now spends most of her time lost in worlds of her own making alternately loving and hating such creatures as vampires, shape-shifters and gargoyles (to name a few). When not writing, she spends her time reading, taking photos of her four beautiful daughters and training her husband to believe she's always right.

a Rafflecopter giveaway
Posted by Rhianna at 4/30/2014

Ok... I've now got to read this book! Thanks for your post!

Thanks lindalou! And thanks Rhi for hosting me. :-)

You are so very welcome Missy. I'm really excited to see where this series goes, your archangels are so richly personified!