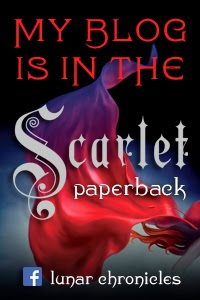 Sooo I found out this news around the beginning of the year, cool right? I haven't had the chance to run out to one of the two book stores in town to see if either has a copy so I can see 'my name' in print, but it's pretty awesome none-the-less. I haven't had a chance to get my hands on a copy of Cress yet either, somehow I let the release day creep up on me and didn't get an ARC. It happens sometimes. I did, however, get an ARC of Night Broken which I'm only mildly excited about since I forgot I haven't read River Marked and Frost Burned yet... or have I? With series that I don't intend to review I tend to forget, thank goodness for Goodreads helping me look that kind of thing up.

While I'm on the subject of ARCs, with so many exciting books coming out over the next few months which one would you love to get your hands on? I'm impatiently dying for Laura Kaye's EAST OF ECSTASY, here's hoping once the time for reviewing rolls around I get to be an early reader. ;)

This weekend our weather is subzero! All week I've been wishing for the warm weather we had in January... it was in the 50's so often we were going out in t-shirts without coats or hoodies. Now I'm avoiding opening the door and wearing a hoodie and socks and slippers all the time. If I could get away with mittens I might do that too. lol

Since this weekend marks a new Magic: The Gathering expansion I'll probably be really busy tonight and won't get time to read. The rest of the weekend though I'll be working on Kit Rocha's release with Vivian Aren and Lauren Dane, the anthology called Marked (releases Monday). Then it's on to The Art of Being Indifferent by Brooke Moss (releases Tuesday), I have been so excited for this one!!! Be on the lookout for reviews of those and C.J. Ellison's Vanilla Twist over the next several days.

On that note I am off to spend some hard earned moolah on trading cards! Leave a comment telling me what you're reading this weekend. -- Rhi
Posted by Rhianna at 2/07/2014