Release Day Celebration: WALK ON THE STRIPED SIDE by Jessie Lane [+ giveaway!]

We are incredibly excited to share with you the second book in Jessie Lane's Big Bad Bite paranormal romance series, WALK ON THE STRIPED SIDE. Out today! 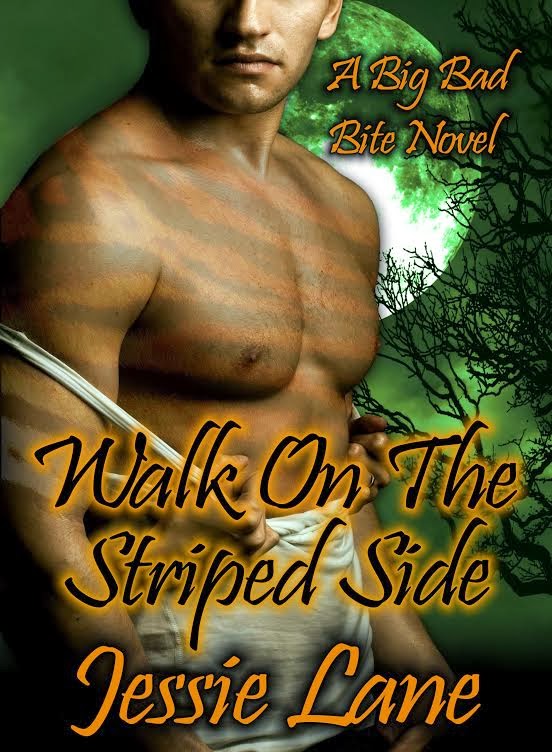 Does he have his claws in her for good? Or is she just yanking his tail?
Elena Demos’s life has been turned upside down. Her mother has passed away, leaving Elena and her two half-sisters to deal with their mother’s will and the crazy stipulations it contains. For the three sisters to inherit the substantial amount of money left behind, they have to go to work with two aunts they’ve never met, in the family business they’ve known nothing about, Amazons Inc. If that isn’t bad enough, she runs into the man who once broke her heart, and it’s only their first day on the job.
Gage Ivanov is a stupid beast. He let the woman who should be his mate go because she couldn't be told of his Other identity. Now, Elena’s back, but she refuses to give in to his demands for her to be his mate. The timing for all of this couldn’t be worse, either, because Gage and his circle of friends are trying to subdue a rogue pack of wolf shifters in Germany who threaten to out the Others to the world of humans. Will he be able to juggle the oncoming conflict and win back his mate?
Claws, love bites and handcuffs - OH MY!

Purchase WALK ON THE STRIPED SIDE:
Amazon | B&N | Kobo | AllRomanceEbooks

Much to her horror, Elena felt tiny pinpricks in the corners of her eyes as they started to water up. “Why are you doing this, Gage? What do you want from me?”

He studied her a moment, watching her so intently that she felt naked from the inside out. “You.”

“Me?” she squeaked back.

“You,” he answered again with an unwavering gaze.

Trying to bolster her courage back up, Elena snapped, “I’m not an item you pick up at the store or a whore to be bought off the street. You can’t just go dragging me around where you want me, snarling ‘mine’ whenever you feel like! I’m a human being, Gage; you can’t own me!”

She expected the ornery tiger to get mad and snarl at her, instead he did something much worse. One side of his lips curled up in smug satisfaction, and the bastard smirked at her.

“I may no longer live in a time period where one person can actually own another person, but make no mistake, love, I do own you. Every little inch. Every breathy moan you give me when I’m playing with your pretty pussy. Every hungry kiss you give me when I’m buried deep inside you. Every beat of that stubborn heart that you swear doesn’t still love me, and every inch of that fierce soul of yours… They all belong to one person. Me.”

Grab the first book in the Big Bad Bite series for only $0.99, limited time only!

Crystal and Melissa often live half their lives with their heads in the clouds dreaming of alpha military hunks, werewolves and kick ass heroines crazy enough to chase after creatures that they unquestionably should know better than to chase.Their first YA novel, The Burning Star, was released in May 2012. Big Bad Bite is their second novel, but their first adult paranormal romance. They are now working on their next two novels, Walk On The Striped Side and Secret Maneuvers. With these projects underway, they are looking forward to showing the rest of the world their crazy stories, heroes and heroines that often plague their minds until written, and hope you will join them on their journey!

Can I have a blend of Nathaniel and Jason from Anita Blake? Or maybe Cookie Monster (in the later books)...