Happy release day to HARD AS YOU CAN by Laura Kaye!

Release day is finally here! And I’m thrilled to share Hard As You Can, the second book in my Hard Ink series, with all of you here today! Hard As You Can follows the surviving members of a disgraced Army Special Forces team as they fight to regain their stolen honor, and finds their investigation crossing paths with a waitress willing to do whatever it takes to stay alive and protect her younger sister. For Shane McCallan, saving Crystal Dean is a mission he refuses to turn down.

Today, I’m super excited to share a sexy and emotional excerpt with you guys! Here we go: 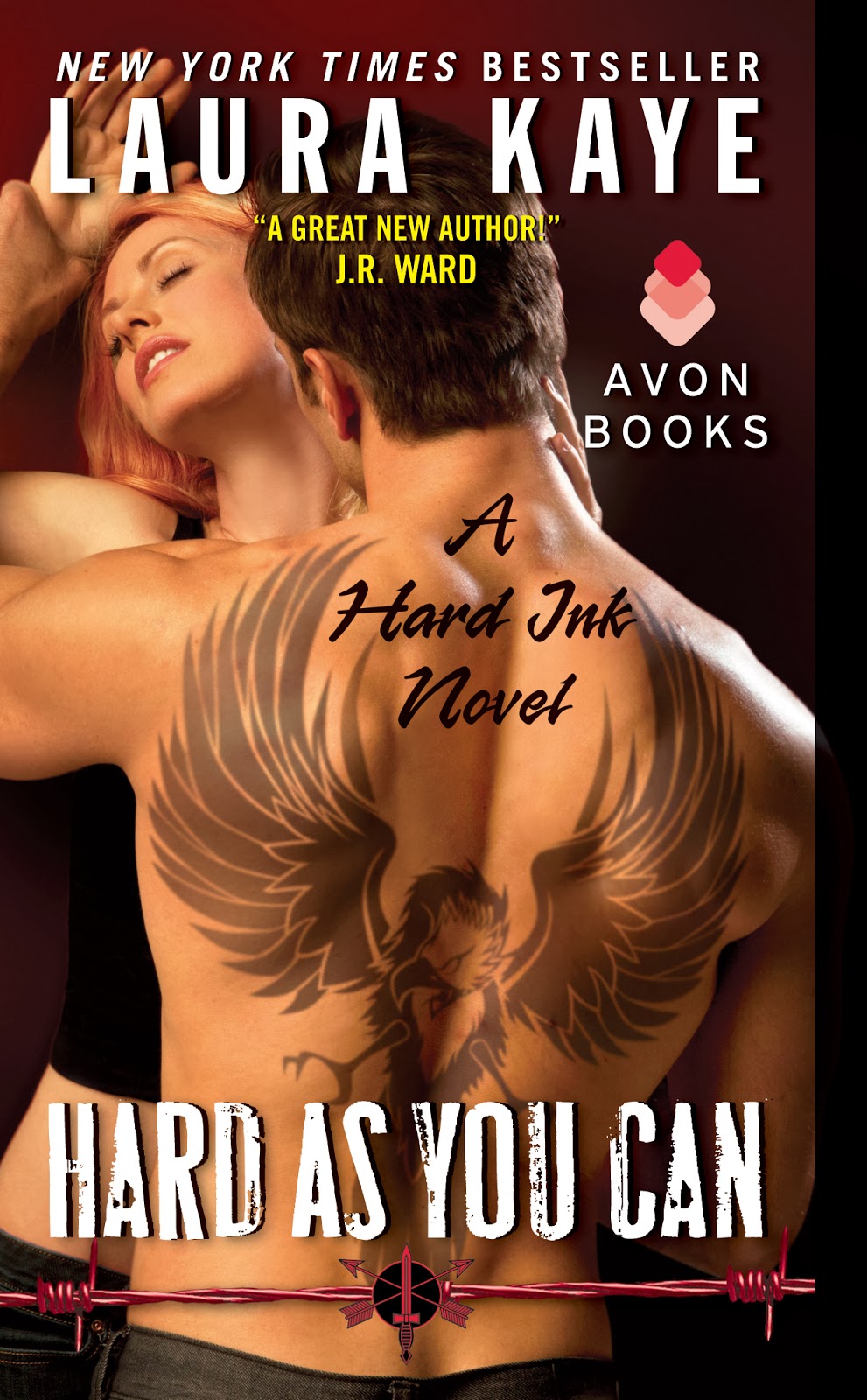 “Don’t look at me like that, Crystal,” Shane said, his voice a raw scrape. It wasn’t a demand or a threat. It was a plea. And the thought that this big, strong, powerful man was begging her for anything was thrilling.

“Like what?” she asked, dragging her gaze up to his. In the diffuse light of the streetlamp, she could tell his eyes were absolutely blazing, and it only fueled the arousal rising up inside her.

Crystal could barely breathe for the way her heart was pounding and her pulse was racing. She slid a hand up his chest to his neck, wanting, needing, just absolutely yearning to have this. Just this once.

Leaning into him, Crystal held his gaze and adored the way his expression filled with such expectant satisfaction, like she’d surprised him. Pleased him. She pressed her lips to his.
The groan he unleashed was needful, almost triumphant. His arms came around her gently and pulled her in. And it wasn’t enough. She needed to be closer. Deeper.

She needed more of Shane McCallan.

A flicker of unbidden panic whipped through her body. Bruno had been her only lover for the past four years, and she’d only been able to take him inside her after months’ buildup of trust and familiarity of touch. That was back before he’d shown his true colors. Or before she’d shed her naïveté. Maybe they were the same thing. Who knew? Stop thinking about Bruno and get out of your head. Just feel. You deserve this. You need this. Besides, cart before horse, much?

Shane pulled away and rested his forehead against hers. “I didn’t come here expecting this. Hoped, maybe.” He smiled. “But I really just needed to see you.”

“I’m glad you came,” she said, combing her fingers through the sides of his hair, then holding his face in her hands.

Crystal couldn’t find the words, so she tilted her face and claimed his lips, and this time the kiss unleashed a fire that seemed to flash through both of them. She shifted into a kneeling position between his thighs, and he hauled her into his lap so that she straddled him. The position brought the hard length of his cock between her legs and she gasped and moaned at the feel of him so close to where she was wet and wanting.

They pressed closer, held tighter, kissed more deeply until all Crystal knew, all that existed in the world, was this moment, this place, this man.

And to think she’d found someone who could teach her something so fundamental that she’d never known before. Or, maybe, she’d known but hadn’t believed. Now she did. Because of Shane. No matter how little time she got to have him in her life, she would always be grateful that he’d shown her what it could be like. With the right person.

Gripping her hair in his fist, Shane reclined her head, opening the line of her throat to his worshipful lips and tongue. He trailed a path of liquid fire over her flesh that left her dizzy, totally awash in sensation. He tugged her hips in tighter, and Crystal moaned at the friction the movement created. He was deliciously hard and thick between her legs. Unable to resist, she rocked herself against him as he laid her back farther so he could kiss her the small part of her chest the V-neck of the hoodie revealed.

Slowly, he drew down the zipper, trailing kisses lower and lower until the heat of his breath fanned over her nipple through the thin fabric of her uniform. Just as slow, Shane raised her back up, bringing their bodies together again. Crystal ran her hands over his chest and stomach, but what she most needed was to feel him, skin on skin. Pulling back from their kiss, she tugged at the hem of his shirt, silently asking for permission.

“Anything you want,” he whispered, taking her belly and her heart on a loop-the-loop.

Man, I just loved writing these two! *grins* Did you have a favorite line? Thanks for reading!
~Laura

Q&A WITH LAURA KAYE
HARD AS YOU CAN is your second book in the “Hard Ink” series (after USA Today bestseller, HARD AS IT GETS). What can readers look forward to?

Readers can look forward to tons of sexy alpha male goodness, awesome bromance between the Hard Ink men, more antics from the Hard Ink puppy, and another great love story between Shane and Crystal. But readers should also be ready for a book that is darker, more intense, and more emotional. This book pushed me to emotional places that were tough as a writer, and might be tough for readers, too. But I think that just makes the payoff at the end so much sweeter!

Shane and Crystal are such an amazing couple to me. They’re each exactly what the other needs. Shane’s best traits are his protectiveness, his fundamental kindness, and his soul-deep loyalty (his southern accent and humor are also right up there!). His biggest weakness for sure is a tragedy from the past for which he blames himself—and it’s something that continues to motivate him in Hard As You Can. Crystal’s best traits are her courage, protectiveness, and selflessness—she’s willing to do anything to keep her younger sister safe. Her biggest weakness is also that selflessness, because the sacrifices she’s required to make are getting bigger and bigger and bigger.

If you could describe your book in a 140 character tweet, what would it be?

When a woman in trouble assists an ex-soldier's covert mission to regain his team's stolen honor, he finds a new mission to save her, too

What are you most excited about with this second book release?

I’m really excited to take readers deeper into these awesome characters and into the mystery behind the Hard Ink team’s ambush and discharge!

What books are you reading right now?

What can fans of your “Hard Ink” series look forward to next?

About HARD AS YOU CAN:
Five dishonored soldiers.
Former Special Forces.
One last mission.
These are the men of Hard Ink.

Ever since hard-bodied, drop-dead-charming Shane McCallan strolled into the dance club where Crystal Dean works, he's shown a knack for getting beneath her defenses. For her little sister's sake, Crystal can't get too close. Until her job and Shane's mission intersect, and he reveals talents that go deeper than she could have guessed.

Shane would never turn his back on a friend in need, especially a former Special Forces teammate running a dangerous, off-the-books operation. Nor can he walk away from Crystal. The gorgeous waitress is hiding secrets she doesn't want him to uncover. Too bad. He's exactly the man she needs to protect her sister, her life, and her heart. All he has to do is convince her that when something feels this good, you hold on as hard as you can--and never let go.

Read an Extended Excerpt of Book 1, Hard As It Gets
Buy Hard As You Can at Amazon | B&N | iTunes | Kobo

Laura is the New York Times and USA Today bestselling author of over a dozen books in contemporary and paranormal romance. Growing up, Laura’s large extended family believed in the supernatural, and family lore involving angels, ghosts, and evil-eye curses cemented in Laura a life-long fascination with storytelling and all things paranormal. She lives in Maryland with her husband, two daughters, and cute-but-bad dog, and appreciates her view of the Chesapeake Bay every day.