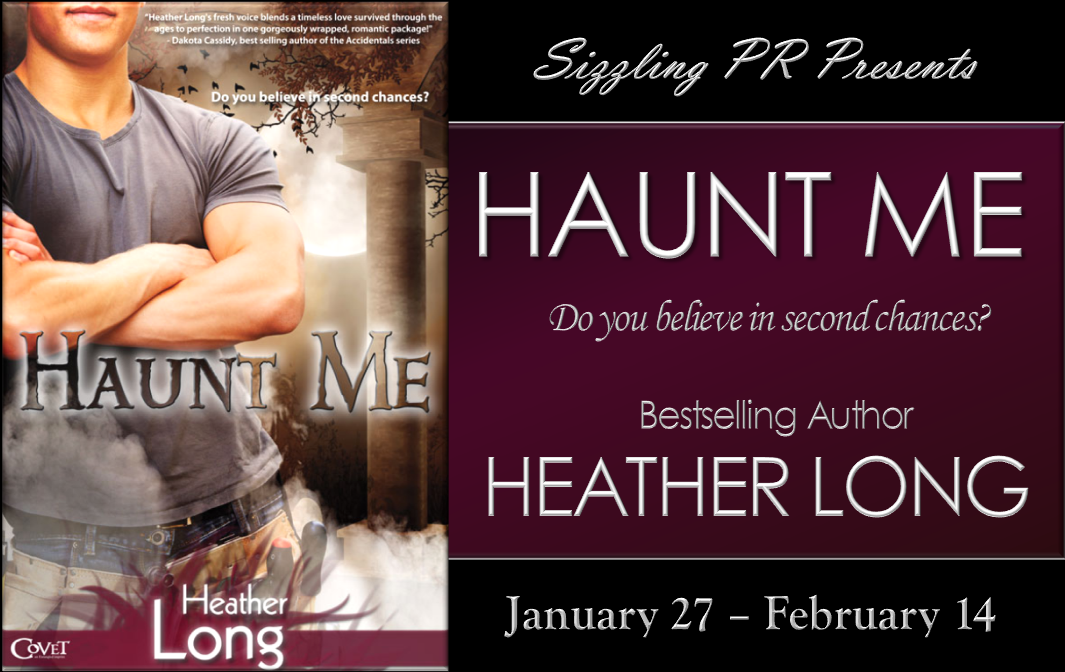 Dear readers, One of the books I read while on vacation that really impressed me was Heather Long's HAUNT ME. I've always loved ghost stories but the southern gothic flavor of this one was delicious. If you haven't read my review yet be sure and check it out. I have a feeling you guys will really like this one. --Rhi

Mac waited on the porch until Justin showed up, a burly, spotlight- sized flashlight in his hand. Fortunately, she’d found a pair of shorts on the washer, or she’d have been standing out there in her tank top and panties.
“Hey,” he said, sweeping his gaze over her.
Laughter gleamed in his eyes, but she couldn’t fault him for making fun of her. She hopped from foot to foot. “Thanks for coming.”
“Sure thing.” He turned the beam from the flashlight toward the darkened house. Lightning flashed in the distance, illuminating his amused face. “Ghost chase you out?”

“The power went out and the door is stuck.” She crossed her arms, mallet in one hand and phone in the other. She wasn’t letting go of either. Her heart continued to race, and she tried hard to keep the sob catching in the back of her throat from making an appearance.
Justin paused and turned the flashlight back on her. “Hey,” he said, taking a step toward her. His humor sobered to concern. “It’s an old house. We’ve got a storm coming. Chances are it’s just a blown fuse. I’ll fix it, okay?”
Not trusting herself to speak, she simply nodded.
“Mac.” Justin gave her arm a squeeze. “Really. Happens all the time. You want to come with? Or go wait in my truck?”
At least he’d managed the offer without making fun of her. Stop being a chicken... But she couldn’t resist staring up at the dark house. It seemed so much more ominous in the occasional flash of lightning. “I’ll go with.”
“Okay.” He held out his hand, and she passed him the mallet.
To his credit, he simply nodded and took the lead. She followed him and fought the urge to grab his shirt and hang on. He went to the fuse box first, but a few minutes of fiddling didn’t earn them any results. When he would have left the mallet behind to head out to his truck, she picked it up.
Justin glanced at the mallet but didn’t say a word. He put a hand on her arm, and the contact soothed the nerves doing jumping jacks in her belly. Supplies in hand, he went back to the kitchen, but the lights still wouldn’t come on. “All right, chances are it’s something at the power station’s end. I’ll make a couple of calls. Let’s check the door next.” Halfway down the hall, he motioned for her to stop. “Watch your feet.”
She glanced down at the shards of lightbulb glittering under the powerful beam of his flashlight.
“Stay right there,” he told her. Glass crunched as he made it to her door. It opened the moment he twisted the knob.
Mac wanted to cry. “I swear it wouldn’t open.”
“I believe you,” he said swiftly—almost too swiftly. “It’s late, you’re exhausted, and I think you could use a break from what goes bump in the night—especially with the storm rolling in.” Despite his tone, Justin wasn’t laughing at her. He could have— particularly after their conversation about ghosts. “C’mon, why don’t you come back to my place? You can have a guest room. We’ll come back and fix this in the morning.” 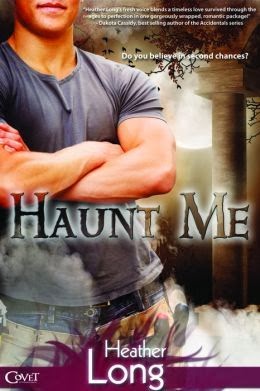 Tagline: Do you believe in second chances?

Synopsis: Recently divorced author MacKenzie Dillon has lost her writing mojo. When she inherits her great aunt’s haunted house in Virginia, she is determined to make a new start. The creepy old house provides inspiration but at what cost?

Successful architect and paranormal skeptic Justin Kent returns to Penny Hollow to fulfill his father’s dying wish of revitalizing their small town. To do that, he needs the allegedly haunted estate at Summerfield. Mac, the new owner, may be gorgeous and spunky, but she refuses to sell.

These two have a dangerous history that spans the ages, but will they discover the truth in time to save their lives?
Book Links:
Goodreads  Amazon Barnes& Noble

National bestselling author, Heather Long, likes long walks in the park, science fiction, superheroes, Marines, and men who aren’t douche bags. Her books are filled with heroes and heroines tangled in romance as hot as Texas summertime. From paranormal historical westerns to contemporary military romance, Heather might switch genres, but one thing is true in all of her stories—her characters drive the books. When she’s not wrangling her menagerie of animals, she devotes her time to family and friends she considers family. She believes if you like your heroes so real you could lick the grit off their chest, and your heroines so likable, you’re sure you’ve been friends with women just like them, you’ll enjoy her worlds as much as she does.
Website  Blog Twitter  Facebook  Goodreads   Newsletter

a Rafflecopter giveaway
Posted by Rhianna at 2/03/2014