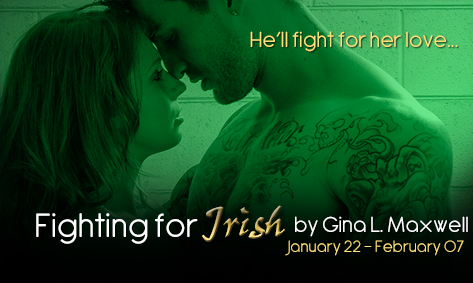 Dear readers,
I hope you had a chance to drop by during the blog's hiatus and read some of the reviews I posted and specifically FIGHTING FOR IRISH, which I gave a solid 5 stars. I didn't elaborate in my review but it touched me on a personal level and I think you guys will really enjoy it. Today I've got an excerpt to share with you as part of the tour. Be sure and read it for a taste of one of my new favorite heroes.
-- Rhi


“Same shite, different night, eh mate?” The British-accented voice of Xander crackled through the comm link in his ear.

Every Friday night was the same. When the people of Alabaster blew off steam from their workweek the bar became a hotbed for trouble. Emotions ran high, fueled by pitchers of beer and rounds of shots. The entire scene was underscored by the classic rock and country music blaring through the sound system.

“Always is,” he said absently as Kat whooshed by holding a tray of bottlenecks.

Barely turning his head, he followed her with his eyes. The swing of her hips and curve of her ass damn near hypnotized him. Kat made waitressing look like an art form, simultaneously weaving her way through the crowd, delivering trays of drinks, and beating back the locals with her sharp wit and even sharper tongue.

As he moved through the land of the inebriated, he searched for signs of trouble and kept one eye on the spunky redhead. She knew how to handle herself and, unlike the other waitresses, never called on the coolers for help. But that never stopped him from intervening. There was always a bad apple in the bunch that didn’t use the sense God gave him.

If he noticed a potential threat, he’d move in and take care of it before it escalated. If his presence alone wasn’t enough, a well-worded threat against the family jewels usually did the trick. Around these parts the “family” kind was all they had and they tended to prefer them intact.

The first time he’d run interference for Kat with a less-than-polite customer, she’d stared at him incredulously. He’d only managed to stare back, unable to find his words with those light blue eyes turned on him, before she spun on her heel and stormed off. That happened a few more times: him stepping in, an awkward staring contest, and a silent retreat.

Then one night after he’d “escorted” a guy out in a chokehold for grabbing her ass, she stalked up to him outside with narrowed eyes and fists planted on slender hips. “I can take care of myself.”

Aiden crossed his arms over his chest. “I don’t doubt that.” 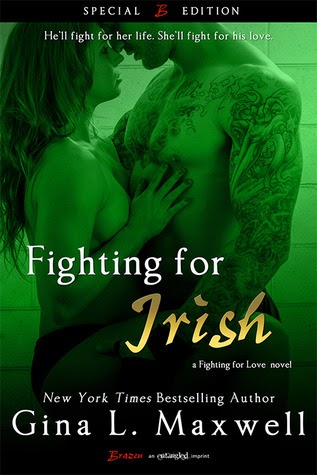 “Then knock it off. The other coolers aren’t as meddling as you. Dealing with a certain amount of crap gets me decent tips. You scowling at every customer who looks at me wrong is cutting into my bottom line, buddy.”

Aiden hadn’t considered that the waitresses got tipped better if they let the men flirt or paw at them. He scowled. He didn’t want to hurt her financially, but there was no way he was backing off. “How much would you say you lose every time I interfere?”

She threw her hands in the air, clearly frustrated. “Five, ten, twenty bucks? How the hell should I know?”

He nodded. “Then I’ll give you twenty bucks every time I keep some asshole’s hands off you.”Her brows drew together and the starch left her spine. “I don’t want your money, Irish.” He liked the way his name sounded on her lips. Or his nickname anyway. Just like she used an alias, he’d stuck with his old nickname from his fighting days. Xander was the only one there that knew his real name—and his secrets, and he intended to keep it that way.

He couldn’t tell her that any more than he could back off like she wanted. Couldn’t tell her that his reason for leaving his home on the South side of Boston for Bumfuck Nowhere had started out as a favor owed to a friend and ended up as something else entirely. That from the moment he saw her, his promise to make sure she was okay for her sister’s peace of mind came second to his own inexplicable need to watch over her. To protect her.

Fighting the urge to pull her into his arms and chase away the ghosts he saw in her eyes, Aiden shoved his hands in his jeans pockets. “As long as I’m around, no one touches you without an invitation.” Unable to help himself, he lowered his head and whispered in her ear. “No one.”

Former MMA fighter Aiden "Irish" O'Brien hasn't stepped into the ring since he accidentally took someone's life in the heat of rage. When his friend calls in a favor that sends him south to check on family, Irish figures he's got nothing to lose. His life is on the ropes. The least he can do is make sure the sexy redhead is safe.

Kat MacGregor has forty-eight hours to settle the twenty thousand dollar debt her deadbeat ex-boyfriend owes a crime boss. If she doesn't, she'll pay for it--with her life. Kat's halfway out the door when a sexy new guy walks into the bar and insists he's there to help.

Irish is forced to fight in the underground MMA circuit to win the money she needs. But he's been lying to Kat. About who he is, about knowing her sister, about why he comes home bruised every night. She's the best thing that's ever happened to him, but breaking her trust will cost him the most important fight of his life: the one for her heart.

Purchase FIGHTING FOR IRISH via:
Amazon

New York Times and USA TODAY bestselling author, Gina L. Maxwell, is a shameless romance addict with no intentions of ever kicking the habit.

Growing up, she dreamed of helping people escape reality with her sublime acting abilities. It wasn’t until college when she realized she had none to speak of, thereby derailing her lifelong plans. Another ten years would pass before she discovered a different means to accomplishing the same dream: writing stories of love and passion for romance addicts just like her.

Thanks to the support of her amazing family, Gina is now the Boss of the world’s first organized romance mafia, the Maxwell Mob, and living her dream of bringing a little romantic fantasy to the world—one steamy novel at a time.


a Rafflecopter giveaway
Be sure to keep following along the tour for more!
Posted by Rhianna at 2/06/2014

I loved this book. It had a strong woman and an alpha male...great tension! Loved it!

*high five* I've been recommending it to a lot more readers than I thought I would.