Q & A with the authors of When Honey Got Married [+ giveaway!]

If you've been a RhiReading fan for more than a year you'll recall that at about this time last year I was in a frenzy of preparation for one of the hubs and I's closest friend's wedding. As the token chick friend in our little group I didn't get the honor of being part of the wedding party. Then our daughter's getting sick the day before the wedding—when we were very far from home, no less—kind of destroyed my attempt to be involved at all. I couldn't even see the ceremony because she freaked out when she couldn't get down and run around and it was overall (for me) a total disaster. I had to scram back to the place we were staying without even tasting the food or doing more than congratulating our good friend and his new bride.

Everyone has a funny or disastrous or amazing wedding story they could tell so I had hoped to ask our authors if they could share one. Alas, someone else already had the same idea so I went with the next best idea... enjoy!

If money were no object and you could have had (or have, as the case may be) your dream wedding, what elements would be the key to making your dream come true? (ie. destination/location, theme, colors, special guests, etc)?

Anna Cleary:
First things first: The dress.
That fairytale dress Grace Kelly wore in To Catch a Thief would do very nicely. Well, it helped catch Cary Grant, and a prince of Monaco. Of course, I would need to look as lovely in it as Grace did. (Grace Kelly, that is. Not Grace Henson, from When Honey Got Married.) But since money is no object, perhaps I could arrange to look like Grace Kelly, and Grace Henson?
Or would that be a bit tasteless?
No, I think you’re right. After my recent trip to Louisiana I’ve become rather sensitive on the issue of taste, so I suspect I’d better leave the two Graces’ lovely images unduplicated. Instead, I’ll settle for a striking resemblance to Scarlett Johanssen, who just happens to bear an astonishing resemblance to Eve Fortescue in When Honey Got Married.
The location.
I’ve always fancied myself in a French chateau somewhere in the region of the Loire. I don’t meant to imply that I have a particular craving for aristocracy—well, certainly not the type of craving that Nina Moreau had in When Honey Got Married .
Hers could be described as insatiable.
The Clearys are by their very nature a genteel tribe, having descended from Guaire the Hospitable, King of Connacht, and they know a thing or two about serving foie gras and cucumber sandwiches on the left - hand bank of a meandering stream to a champagne- guzzling crowd.
So imagine a graceful old chateau of weathered stone and dark green shutters, lush green vineyards stretching as far as the eye can see, and a grassy knoll dotted with red poppies, all overlooking the River Loire. On that knoll imagine a celebrant in a magnificently embroidered robe (possibly designed by Karl Lagerfeld. Heck, I wouldn’t be surprised if Karl himself was the celebrant!) 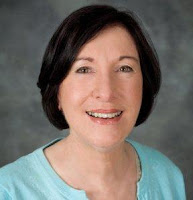 The guests.
That one’s easy. The guest list would include all the people in the world I love, including some I admire from a distance. Shirley McLaine for example would certainly get an invite after her performance in When Honey Got Married—Oh. No, sorry, that was Eve’s Aunt Minna—but the delightful Shirley will definitely have a special place at the bridal breakfast.
Miss Kimberly Lang will be there, as well as Misses Ally Blake and Kelly Hunter. They can all be maids of honour, and I have absolute faith that such creative artists as these ladies undoubtedly are should choose their own spectacular gowns, so long as they leave their veils and tiaras at home!
Pippa Montgomery may be invited, but only if she promises to wear something appropriate this time, not to try to outshine the bride, and not to blog indiscreetly about the affair afterwards. With Pippa’s history at other people’s weddings, that would amount to a piece of shameless hypocrisy!
Last but by no means least: The groom.
Well, you all know my dilemma. With so many to choose from— Johnny Depp (and he adores the chateau life, make no mistake), Clooney, Placido Domingo, David Gandy, André Agassi...The list goes on—I’ll simply have to close my eyes and take a blind stab.
Who do you think I’ll come up with?

About Anna Cleary:
Anna Cleary is an affectionate Australian who discovered that writing is an even more powerful means of escape than reading. To this end she writes romance novels that are flirty and funny, sometimes weepy or dramatic, always emotional, and often piping hot.
Anna enjoys her family and friends, adores music and the arts, has an ongoing love affair with Italy, and is kept under constant surveillance by a thoughtful and deeply sensitive cat.
Website | Facebook | Twitter | Goodreads 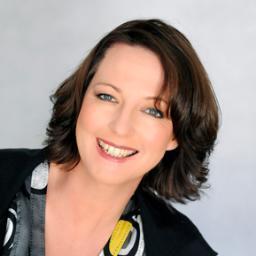 If Anna’s taking us to a chateau on the banks of the Loire, I’m keen to bring the party to Bora Bora, Tahiti, for a relaxed beach wedding. Not that I’ll be wearing a bikini – the gown will be frothy and couture and probably not white. Think the colours of the Mamma Mia movie, and let’s have Meryl and Pierce and most of the gang from that movie there as well. The food – we’re talking fruits of the tropics and the sea, with a French Polynesian twist. Formal table settings and crisp linens and candlelight, right there on the beach. After the feasting, dancing and toasting, guests can meander back to their bungalows built over the lagoon, and surface for breakfast in the morning when they please. That and the detox spa is on the house ;)

My now-hubby was in the US on a Visa that was about to expire, so we had a run to the courthouse followed by lunch at the same restaurant where I was working at the time (because we were broke and I used my 25% employee discount). It was simple and quick, and honestly, I really wouldn’t change a thing. Right now, though, I’m quite taken with Honey’s wedding – it’s over the top in many ways, but everyone seemed to have a fabulous time, and it inspired four other women to find love as well! So I’d have Honey’s wedding – and I’d let Ally Blake run wild and put back in everything I made her take out of the book (except the hummingbirds. That’s non-negotiable, ladies!).

About Kimberly Lang:
USA Today bestselling author Kimberly Lang believes that romance should have both sizzle and sass. A former ballet dancer and English teacher, Kimberly now does yoga and writes the kind of books she always loved to read. She’s a Southern belle with a trouble-making streak and a great love of strong heroes and even stronger heroines.
Website | Facebook | Twitter | Goodreads 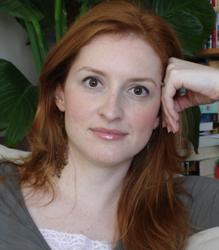 Well, now I consider my marriage just about the perfect day.
I was married in Las Vegas. No elopement for this girl; we gave our families time to save up and they all came with us!
And talk about stress-free. Apart from having the dresses made and buying the suits in Australia before we flew out, we organized the entire thing - from the chapel, to the flowers, hair and make-up, limo, after party venue - in the two days leading up to the event! The sun shone, the birds sang, and it cost us pittance ;).
Now...if I had to do it all over again - I've been married ten years now, surely we've had a good enough run ;) - and money was no object... You know what? I'd do it all the same.
I mean, no amount of money could get you a run-in with the truly delightful Tony Curtis in the lobby of the MG Grand during which - after hearing I was getting married that Wednesday - the superstar said, with a gorgeous glint in his eye, "There's a lot of time between now and Wednesday."
Considering I got married in Las Vegas
See now I've been there and done that.

About Ally Blake:
Australian writer Ally Blake is a redhead, a footy fan, a devotee of the language of Aaron Sorkin; she is addicted to stationery and M&Ms, weak in the face of Italians and firefighters, married to a spectacular and ever-patient man, mum to three beings of pure delight, and a firm believer in love, luck, and fairies. She is also a best-selling author with more than twenty-five fun, flirty romance novels under her belt with over three million copies of her books sold worldwide.
Website | Facebook | Twitter | Goodreads
About WHEN HONEY GOT MARRIED:

Four high school friends and a high society bride reunite to celebrate the wedding of the year with the sexy, successful men who steal their hearts and set their skin aflame... 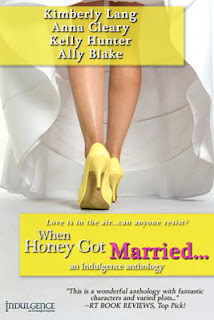 A wedding planner should never mix business and pleasure, but Grace couldn’t resist breaking rule number one for a hot night with her high school crush!

Eve hoped to make one last play for the groom-who-got-away…but instead the down-on-her-romantic-luck actress instead found herself in dark corners with his successful, seductive cousin.

The sister of the bride needed a date of convenience and who better than her hazel-eyed, mysterious co-worker? If only Nina could keep her hands off his perfect body until she learned his true identity…

The groom proposed to her eight years earlier, but it was the steamy kiss that Pippa shared with his brother the night she left town that haunted her memories. Now she’s back and sharing much more than just kisses.

Nothing was going to ruin Honey’s wedding to the man of her dreams. And she has just the wedding surprise for her beloved groom!

a Rafflecopter giveaway
Posted by Rhianna at 5/14/2013

Thanks for having us here Rhianna. It's been a blast! x

Thanks for popping by Anna! You guys had great answers! :D

I love reading about others wedding stories!

I love wedding stories and this one is just irresistible!