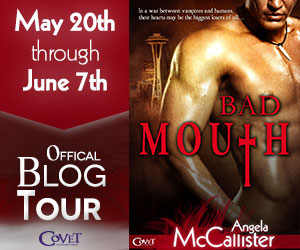 I’m an author, which really means no one is safe around me. Whether I’m writing a paranormal world or alien characters, I won’t hesitate to put you in a book. You might be surprised how much of an author’s life makes it onto the page.

In Bad Mouth, Ezra, the hero Kade’s best friend, is a powerful vampire. He’s compelling, and I know this because all who’ve read Bad Mouth are waiting eagerly to read more about him. He’s funny, seemingly light-hearted, but with a darkness you only see the edges of. What you might not guess is that he’s based from my real-life encounter with Alex Skarsgard, not his alter-ego as Eric, but the man. I spent half the day with Alex when he filmed scenes of Battleship on my Destroyer. Let’s get this out of the way: yes, I touched him, hugged him, and got to be close to his sexy, masculine scent *sigh* But he was funny and compassionate and down-to-earth, and he left a big impression on me, enough to make him a character in my book.

The term ‘flashing’ comes from my fellow Sailors, Aric, Robert, and Trevor, who always used that term in jest to say they’ll arrive in a jiffy. Much of the banter that happens in my writing comes from the camaraderie I’ve lived with in the Navy. We tend to get the worst with put-downs when we’re at our most stressed, usually on deployment. Sounds brutal, but we go for each other’s weaknesses, like scenting blood in the water, lol.

I write specific people in. I wrote a scifi romance trilogy, currently on submission, which features two of my shipmates from my last ship—hey, they asked for it! I killed one off (sort of—no spoilers here!) and the other I crippled in book two but who’ll be the hero in the final book. You’ll know who they are if you read the Acknowledgements in Bad Mouth. I made another shipmate an antagonist—oh, and was that ever fun!

There really is fact in fiction, more than simply universal facts. Writers can’t help but reflect life experiences, and I personally can’t help but take notes on life around me. I often think ‘wow, that’s a great piece of dialogue.’ So when you get to a point in the sequel to Bad Mouth where someone’s ‘raging like a Spartan,’ you can laugh to yourself. There’s some quality to what’s (or who’s) appealing enough for me to put in there that I believe will create a particular mood or emotional response in the readers.

Ever want to be in a book or name a character? Feel free to put your suggestions in the comments, and we’ll see what ends up in a future book. Throw some names or jobs or situations out there, and I’d be more than happy to see what I can work in! 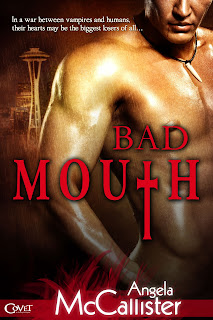 After her ex-husband’s obsession with vampires, Valerie Craig is on a mission to stop transformations. Of all vampires, Kade Rollins is the worst of the worst, but when multiple murders plague Seattle, Val is forced to enlist his aid. Kade’s crude wit and seductive nature attract her like no other, but she can’t ignore his violence toward his human servants, no matter her yearning to forget.

She’s torn when she learns Kade may be behind the murders. Val's worked hard to protect humans from vampires, but the truth surrounding the murders could ignite a bloody battle between their races, one humans are sure to lose. Someone is pulling strings to build a vampire army and spark the war—setting Kade up to kick it off. But if she trusts the vampire prince, she risks her job, her integrity, and her heart if he betrays her as all the men in her life have. 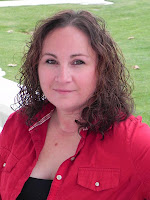 Angela McCallister is a US Navy Sailor and author of Paranormal Romance repped by the fabulous Nalini Akolekar. Spoiled by the gorgeous weather of Southern California, she spends her days reading and writing whenever she's lucky enough to be away from work. In fact, she's never to be found without a book hidden somewhere on her person. Over the past two years, her writing has finaled in multiple RWA writing competitions, and her debut Paranormal Romance, BAD MOUTH, won MERWA's 2012 Everything But The Kitchen Sink Competition.

In addition to the tour wide giveaway—which you can enter using the Rafflecopter widget below—I am giving away one ebook copy (US/INT) of BAD MOUTH to one RhiReading follower (just mention one place you follow: Facebook, Twitter, Google+, GFC, etc.) who answers at least one of the following questions in the comments:

Even if you don't consider yourself particularly creative (ie. writing, art, etc.) how do the people around you inspire you?

If Angela was inspired by you, who would you want to inspire the hero she wrote for you?

Which do you enjoy more... paranormal romances or scifi romances?

I will use random.org to pick a winner on May 31st!

Thank you so much, Rhianna, for hosting me here and for taking the time to review my book. You're reviews are perfectly detailed with just the kind of info I look for in a review to see whether it's right for me. I'm always on the hunt for new books :)

Hi Angela,
You can write me in as the clutzy dog lover. My brother-in-law, Randy Briggs, is in Janet Evanovich's plum books as a small time hood with a taste for gambling and strippers. LOL It is coincidence only.

My first and only published work drew lots of inspiration from my neighborhood friends... but then... I was only 7 when I wrote it. lol

It's easier to find inspiration in my guy friends now that I'm older for some reason. They say the funniest things! Perhaps it's the mystery of the male mind and how it comes up with the stuff that flies out of their mouths. ;D

Thanks for being here today Angela! I have a feeling this is the start of a great friendship. :)

I prefer PNR because I like all the supernatural creatures you can play with :)I really like the sound of BAD MOUTH, thanks.

@Morgan: I think I've met your brother-in-law, lol! And clutzy dog lover would be fun to write. I don't know why, but there's something endearing about a clutzy person. Usually.

@Rhi: 7??? Was some of it in hieroglyphics because I might have read that ;) I know what you mean about the guys. There are few females in the electronic tech world, especially in the Navy. I work almost exclusively with some pretty bold-talking men, lol, and heck do I have some sea stories! And I'm certain this will be a great friendship! Hit me up anytime you want to talk books. Just imported my Amazon stuff to Shelfari, and OMG. Like 900 or so. Yikes!!! And N.O. I haven't read them all, but maybe 600. What was I thinking?????

@Sharon: I lean more to PNR also, though I write scifi romance, too. I'm not very big on hard scifi simply because a lot of it tends to get too detailed to the point of dryness, but if you read my work, you may recognize I'm a minimalist. I like enough detail to set a scene, but not drag on. Maybe this is why the category-length is so appealing. There's just no room for that sort of detail. I mean, I'm a JR Ward addict, but I skim quite a bit in her books.

@Patricia: Thank you so much! I've received great feedback on it so far, which couldn't make me happier :)

I follow by GFC: Vanessa N.
My favorite genre to read are paranormal romances.