Though I lean more toward fiction with fantasy elements (paranormal, steampunk, fairytale retellings, etc.) last year found me hopelessly smitten with a certain breed of contemporary romance. When Entangled publishing launched their Brazen line I couldn't wait to savor heroes smothered in ink and chipped off the bad boy block. One of the most enjoyable reads I experienced was Gina L. Maxwell's SEDUCING CINDERELLA. It was just category enough to be over-the-top and erotic enough to make me blush and fan myself. I've been so excited to see what her next hero and heroine brought to the table and I think this teaser will have you racing to your fave e-tailer to get your copy... enjoy!

And if you're still not convinced drop by the other stops on the tour to find out more juicy details and see what other reviewers thought about Jax and Vanessa.

Excerpt
As she approached the bar, Jackson assessed her over the top of his mirrored shades and let out a soft whistle. "You vacationing or entering the swimsuit competition in the Miss America pageant?"
Sliding onto the stool next to where he stood, she began, "You see, Jackson—”
“My friends call me Jax.”
Vanessa pushed her tortoise shell sunglasses up on her head and regarded him with a twinkle in her green eyes. “Ah, like those annoying pointy little things for kids that always seem to be underfoot.” She nodded as though all the world’s mysteries suddenly made sense. “I so get that.”
Damn, he liked her spunk. “I’ll just bet you do,” he said, giving her a huge smile he didn’t have to fake. 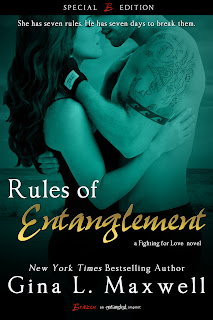 “As I was saying, Jackson,” she emphasized with a saccharin-sweet grin, “a girl should always look her best. She never knows when she might meet a handsome stranger at a beach bar who can rescue her from her lunch date.”
“Drink date.”

She waved her hand dismissively. “Semantics.”
Gesturing for the bartender, she ordered herself a Blue Hawaiian, or as she called it, “That big blue thingy I keep seeing.” How adorably tourist.
“Unfortunately, you can’t get rid of me. How would it look if Lucie left Reid to cavort around the island with another man the week of her wedding?” He didn’t bother mentioning he planned on leaving her after they shared their drinks and he came clean about his impulsive fibbing streak.
“Sadly, you’re right. But next week, while Reid and Lucie are enjoying their honeymoon on a Mediterranean cruise, I’ll still be here and incredibly available.”
Jax’s gut twisted at the images of a sexy Vanessa being fawned over by every man within a square mile. His brain told him it was none of his damn business how she spent her vacation, and logically speaking, he knew it was right. Unfortunately, he’d always been a man who followed his gut.
Her Blue Hawaiian arrived, and she didn’t waste any time sampling it. Lifting the large bowled glass, she sipped the electric blue liquid, made a sound of approval that tightened his groin, then licked the sugar on her lips she’d lifted from the rim.
Clearing his throat to disguise a groan, he ordered a second Heineken and then killed his first. By now, the idea of her spending time with random locals was on its way to giving him an ulcer. His other half—the side he fully acknowledged was more caveman than gentleman—was trying to claw his way free.
Tamping down his irrational shit, he thanked the bartender for the new beer and kept things light. “You know, as your personal host, I feel I’d be shirking my responsibilities if I allowed a bunch of jerks to circle you like sharks around chum.”
“I’m sorry,” she said with a look of disbelief, “did you just refer to me as fish guts?”
“You are a lawyer.” Wink. Drink.
She laughed in the same way his buddy Corey did when they got into a good-natured pissing match about who was the better fighter. “Okay, Maris, I'm giving you fair warning.” She gestured back and forth between them. “When this is over with, I have every intention of finding some hot Hawaiian hunk to entertain me for a few days. And should you interfere in any way, shape, or form, I'll be forced to hurt you."
Chuckling, he removed his shades, set them on the bar, and leveled her with patronizing amusement. "You hurt me? That’s adorable; truly it is.” She opened her mouth to fire back, but he didn’t give her the chance. “I will say I'm glad you've decided to have fun with a local boy while you’re here, though."
Her mouth closed and a small furrow creased her brow. He loved it when strategy worked.
Crossing his forearms on the bar, he slowly leaned toward her. Her exotic citrusy scent filled his lungs, the smell so intoxicating he resented the need to exhale. Trying to ignore the pang of desire, he lowered his voice and layered on the suggestive tone. "I’m local. Think I might be the man for the job?"
Staring up at him, her jaw slackened, opening her mouth a bit. Testing the waters, he sucked his bottom lip between his teeth and let it drag itself free. Her eyes dropped and fixated, darkening with interest.
And Bingo was his name-o.
"I think that's a yes, princess."


Seven days. And seven rules to break…
District Attorney Vanessa MacGregor firmly believes that structure and order are the stuff that dreams are made of. Happiness can be planned—and it starts with the seven rules she’s laid out for her future. But as she’s organizing her best friend’s wedding in Hawaii, all of Vanessa’s best-laid plans are about to meet their match in a wickedly hot MMA fighter…
Jackson “Jax” Maris is focused on surfing, training, and fighting. That is, until he opens up his big mouth, and finds himself having to pretend he’s engaged to his little sister’s best friend, Vanessa. When they’re forced to share a romantic bungalow, however, their little charade suddenly takes a turn for the seriously sexy. And while Jax is definitely not part of Vanessa’s long-term plan, he has seven days—and seven naughty nights—to turn her seven-rule plan upside down.

Growing up in small town Fort Atkinson, WI, Gina L. Maxwell, formerly Bisbee, could often be found onstage in the latest theatrical production, performing with her high school show choir, or holding office in her local FFA chapter. She dreamed of following in her father’s footsteps in the entertainment business, of enabling her audience to forget about life for a few hours as they enjoyed the stories she told through her love of singing, dancing, and acting. It wasn’t until her sophomore year in college when she realized she had no acting talent to speak of and her dream needed some adjusting. Another ten years would pass before she discovered a different means to accomplishing the same dream.

Within those ten years Gina married her high school sweetheart, had two beautiful children, and moved more times than she cared to count. In 2009 she started writing as a hobby while her kids were in school, and it quickly became an obsession she couldn’t stop, and then a dream to publish stories of love and passion for romance addicts just like her.

Three years later, her dream came true when she signed with Entangled Publishing for a total of seven books in two of their imprints.

The first book in her paranormal romance trilogy, Desires of the Soul, is set to release both digitally and in mass trade paperback in Summer 2013 for the Entangled Select imprint.

When she’s not writing or wrangling plot bunnies, Gina keeps busy with her wonderful family and their ever-growing extra-curricular schedules. Thanks to their immense patience and support, she’s able to do The Thing She Was Meant To Do and live her dream of bringing a little romantic fantasy to the world, even if only in the pages of a good book.

To celebrate the release of RULES OF ENGAGEMENT I'm also giving away a Seducing Cinderella and Rules of Entanglement swag pack to one lucky commentor who tells me where they follow RhiReading (ie. GFC, Facebook, Twitter, Google+, etc.) and answers the following question:


According to the excerpt, what are Reid and Lucie doing on their honeymoon?

I'll pick a winner on May 10th so be sure and leave a valid email address so I can contact you if you win.

You can also enter the Tourwide giveaway of a Kindle Fire HD or a $200 Amazon Gift Card through the rafflecopter widget below. Good luck!

I'd love to read this!

Lucie and Reid are headed out to honeymoon on a Mediterranean cruise.

Following via GFC as MomBlogger

answer: Reid and Lucie are going on a Mediterranean cruise for their honeymoon.

Signed in the rafflecopter as "Susan"

added you to my G+ circles