Dear readers,
Between real life obligations, my new business, and blogging I'm finding myself pulled in so many directions it's not even funny. Which is why I decided to work on reading A Riveting Affair this week. I just LOVE steampunk and as a romance reader it's not hard to get gushy over heroes and heroines who are scientific and creative or mannerly and a bit old-fashioned. So when it came time to decide how to approach the tour for this one I was limited on time and thought one simple question would give you lots of insight into the worlds these three talented authors have built. Enjoy!
-- Rhi

If you were stranded on a deserted island which three items featured in your novella would you most want to have with you and why?


Patricia Eimer: Honestly, this will sound like cheating but I wrote my characters in a steam powered, wireless telegraph machine. If I'm stranded somewhere I want that-- so I can signal for help and get someone to come save me or at least send sunblock and a good looking man then possbily come back and save me a week later. 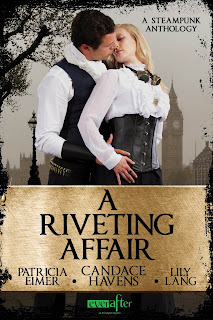 Candace Havens: 1. A tea-o-rator because everything is fine as long as you have a cup of tea.
2. A special sleeping chamber to heal all wounds and keep the skin looking youthful. That island sun can be terrible for the skin.
3. Barnes, Maisy's trusty Scottish sidekick. He's such a handy man, and a good one to have around in a fight. He'd be great at finding and cooking food.
4. A certain U.S. Marshall, he's troublesome, but oh so nice to look at.

Lily Lang: This is an unfair question for me, because Beauty and the Clockwork Beast is about building a teleportation device ;) But if the teleportation device was not an option, I'll take a cooking robot (mmm food), a steam carriage (in which to explore the island, of course,) and the cat. Because cats are vicious predators who will help me become queen of the island.
Connect with Lily Lang
Website


Beauty and the Clockwork Beast by Lily Lang

Rose Verney wants to fulfill her father’s dying request: to complete construction of the teleportation device he designed. Knowing just who can help her succeed, she seeks out Sebastian Cavendish, her father’s brilliant former student.

Sebastian hasn’t left his home since he returned from the Civil War. He's a broken man, his prosthetics a reminder of the terrible destruction his inventions brought to the battlefield. He wants nothing to do with Rose and her father's masterpiece, but when she barges into his abandoned lab and begins construction, it’s everything he can do to resist getting involved. Especially when she charms her way into his monstrous heart.

Professor Maisy Clark, professional demon hunter, is on the trail of an evil scientist responsible for the deaths of hundreds. Julian is worse than the monsters he creates, but he's also obsessed with Maisy and willing to kill anyone who gets too close to her.

Just when she thinks she has Julian cornered, the sexy marshall Jake Calloway insists the investigation is his, and everything goes to hell. Maisy came to Texas to corner the scientist whose macabre experiments have taken so many lives, and Calloway is just another distraction she doesn’t need. Julian is her responsibility, one she’s not about to share. Even if Calloway can help, Julian will know Maisy is falling for the marshall, and she's not willing to risk his life.

The Clockwork Bride by Patricia Eimer

When engineer Aida Mulvaney attends a masquerade ball at the home of a staunch Luddite earl with a personal vendetta against her father’s company, she doesn’t expect to end the night married to the earl’s son Julian Capshaw, a brilliant engineer in his own right. The marriage will allow both of them to pursue their love of science, without interfering parents and ridiculous social stigmas. Though they escape to the Continent to start new lives, Julian’s father will have none of his heir’s disobedience. Before long, a marriage begun for the sake of convenience becomes a union of passion, but will it survive the machinations of an earl determined to destroy everything they love?

a Rafflecopter giveaway
Posted by Rhianna at 4/11/2013