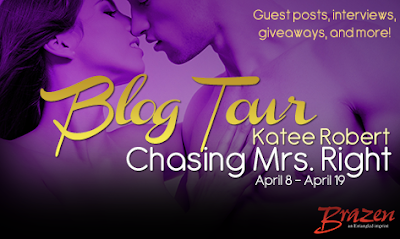 
Just Chasing Mrs. Right was different for me in pretty much every other way, it was different in this way too. I wrote the first draft with a background of movies that I couldn’t begin to name (seriously, I have no recollection). The editing process was something else altogether.


I have a Pandora station as a result of CMR that is…strange. It started with Escala because their music is relaxing and powerful all at the same time. But slowly other things filtered in. Somehow, by the end of Ian and Roxanne’s book, I had Skillet, Within Temptation, some song about cows that sounds REALLY sad (I don’t think I want to know what happened to those cows), and Jason Mraz.

Yeah… I got nothing. But it fits. There are some hard edges in this book, and some sad ones as well, and this twisted playlist helped me accomplish that.

All wrapped up in a sexy package, of course. ;) 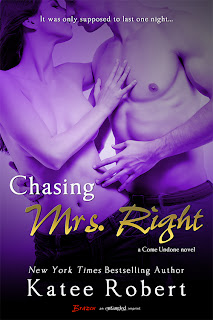 Blurb:
Roxanne Stokes doesn’t believe in love. She does, however, believe in the sexy-as-sin stranger who literally knocks her off her feet in front of a nightclub. The chemistry sparking between them takes her breath away, and she’ll do anything to ease the pain in his eyes…until she realizes the handsome stranger is her best friend’s older brother who’s just come home from war.
Ian Walser had no idea the gorgeous woman he slept with the night of his homecoming party was his little sister’s best friend—or that she’d be gone before morning. Roxanne’s touch soothes him in a way nothing else can, and he’s not ready to walk away from that yet. Not when spending time with her gave Ian a glimpse of everything he’s ever wanted.
When his sister unwittingly pushes them together, he sees his chance. But convincing a woman who doesn’t believe in love that she’s his Mrs. Right might be harder than any mission Ian’s undertaken. Good thing this soldier likes a challenge…
Read the first chapter here!
Purchase or shelf CHASING MRS. RIGHT:
Amazon | B&N | iTunes | Kobo | Goodreads

About Katee:
New York Times and USA Today bestselling author, Katee Robert, learned to tell stories at her grandpa’s knee. Her favorites then were the rather epic adventures of The Three Bears, but at age twelve she discovered romance novels and never looked back.
Though she dabbled in writing, life got in the way—as it often does—and she spent a few years traveling, living in both Philadelphia and Germany. In between traveling and raising her two wee ones, she had the crazy idea that she’d like to write a book and try to get published.
Her first novel was an epic fantasy that, God willing, will never see the light of day. From there, she dabbled in YA and horror, before finally finding speculative romance. Because, really, who wouldn’t want to write entire books about the smoking-hot relationships between two people?
She now spends her time—when not lost in Far Reach worlds—playing imaginary games with her wee ones, writing, ogling men, and planning for the inevitable zombie apocalypse.

a Rafflecopter giveaway
Posted by Rhianna at 4/16/2013

This looks quite an interesting book to read!!