Thanks so much to Rhianna for letting me come by. Down and Dirty is out now and I’m soooo excited. It’s the second book in my Dare Me series, where at the start of each story, a dare is made that somehow becomes the catalyst for a romance. I thought today we could talk a little about dares and what makes them so compelling and what about them makes us do things we would never normally do.
I have a theory about that. One of my favorite movies in recent memory is called Cabin in the Woods. As the title suggests, it’s a horror film, but it’s also a black comedy. In it, the characters go to a creepy cabin in the woods (natch). Once there, they proceed to drink too much, assert their sexuality (which we alllll know is verboten for women in horror movies) and play a game of truth or dare. Traditionally, this does not bode well, as we all know that naughty teens who partake in such lascivious behavior invariably get the axe. In the movie, it’s very tongue in cheek, but as the second dare of the night sends one of the characters into the world’s creepiest basement, me and my hubs found ourselves doing that impotent shouting at the screen thing, ala, “GO BACK, you idiots. NO! Do not open the things!” etc.

The thing is? Dares are powerful and insidious. Human beings have an innate desire to be liked. Accepted. Part of a community. And in this quest, we are willing to do the strangest things, like GO into a basement full of creepy stuff, or eat a dog biscuit (did it), or ring Crazy Ol’ Mr. Young’s doorbell (did it, too), even though he’s a known (to us, at least) serial killer. The three words “I. Dare. You.” have resulted in more punishments in my neighborhood than anything else I can think of. Add the words “Double dog”? Forget about it. You’d have to be made of STONE to resist. Which my heroine, Cat? Isn’t. Check out the blurb of Down and Dirty: 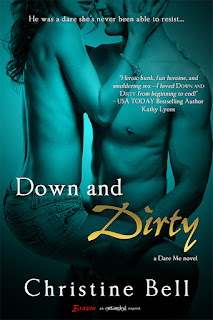 He was a dare she’s never been able to resist…


Cat Thomas has never been the kind of girl to stick. A self-professed infatuation junky, she latches on the newest, hottest guy on the block, then finds a reason—real or imagined—to dump him. When she accepts a dare to rekindle her high school flame and jump in bed with her brother’s best friend, Shane Decker, she knows she’s in trouble. She can’t resist the man, even after all these years apart, and that just won’t do.


Shane has come back to town for a couple reasons. The biggest one? He’s tired of living away from those he loves, including Cat. But now she’s spooked and will do anything to drive a wedge between them, including trying to fix him up with other women through an online dating service.


What does he have to do to make her see that settling down doesn’t mean settling, and he’s ready to spend a lifetime proving it?

So tell me, readers! Have you ever done something totally out of character just because someone else dared you to? One commenter will win an e-copy of Wife for Hire, my fake fiancé story released through Entangled’s Indulgence line, or Down for the Count, my first book in the Dare Me series, so leave a Twitter handle or email address to I can contact you!


Christine can be found on the web at www.christine-bell.com and on Twitter, under the handle @_ChristineBell

a Rafflecopter giveaway
Posted by Rhianna at 4/02/2013

I have done a few things when dared when I was a teen and young adult (the young adult dares often came after drinking some sort of alcohol--usually Tequila). As I got older, I don't tend to take risks like I used to, which is good in some ways, not in others.
manning_J2004 at yahoo dot com

Unfortunately, I have. Funny that June M.'s culprit was Tequila also. I ended up skinny dipping in the pond/lake of the small town that I grew up in. Sober, I wouldn't have taken on that dare, but after a few drinks the inhibitions took flight & I went for a swim.
JessieL62(at)comcast(dot)net