Hi Patricia! It’s been far too long since the birth of Entangled Publishing when a friendly publicist emailed me a request to read LUCK OF THE DEVIL. It was the book that both introduced me to an amazingly fresh way for books to get from writer to readers and the hilarious life of a Princess of Hell named Faith. I’m so glad to have you back to visit!


PAE: It has been a really long time since we got to chat. 18 months? I think it’s been about 18 months.

I’m a big fan of books that blend paranormal elements and humor but your series takes it to a whole new level by featuring the Alpha and Omega—God and the Devil, for you readers who haven’t started the series yet—in a whole new light. They’re not quite one big happy family but it makes for some terrific comedy. How does your own family help you with your writing (ie. inspiration, beta reading, cooking)?


PAE: How does my family help with my writing? They don’t. It’s all me. ALL ME!!!!! No really I couldn’t survive without my family. My husband and my mother are both saints because they help out so much with the cooking and the cleaning and wrangling the kids when I need to write or edit or do something book related. Then, on top of that, my extended family is always a huge source of inspiration and stories and various giggles that make it possible to write about crazy families. I mean no one in the family is a demon (that I know of…) but the craziness is just sort of an extension on all of us. 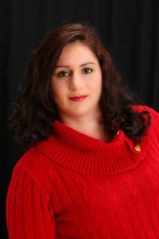 DEVIL MAY CARE is just as giggle-inducing as its predecessor. I’ve read that you listen to BBC Radio while you write and it’s no secret that American and British humor can be a bit different. Which do you think has a bigger influence on your own comedic voice as a writer?


PAE: I think its British humor actually that’s more of an influence for me as a writer.


One of the enjoyable themes of your series seems to be that the characters can be Evil with a capital ‘E’ and not actually be the evil one. It’s something I always find fun in books and film. What are some of your favorite Evil fictional characters who aren’t all that evil at heart?


PAE: Severus Snape is my ultimate winner on that one. I mean how many of us spent 6.75 books hating him and then it was just a complete head turner and we all sort of cried for him. I mean it sounds stupid but I seriously think Severus Snape is going to be one of those characters that in 50 years English PhD students are going to be writing dissertations on.


(Very good choice and one of my favorites too, though I admit I was sympathetic to Snape from the start.)
It was such a long wait between Speak of the Devil series books. Have you started working on another? Do you have any other projects in the works that you can tell us about?


PAE: There is another Speak of the Devil Book. Book #3 is called Before the Devil Know’s You’re Dead and it takes Faith and Matt on (what I think) is an even more interesting journey where we finally get to see what she’s really made of and how far she’ll go for the people she loves—especially Matt.


Other than that, I have a novella coming out soon in Entangled’s Riveting Affairs Anthology called Clockwork Bride and it’s sort of a starcrossed lovers who’s families hate each other story where in the end she gets to save his bacon from a fire breathing clockwork dragon. And yes, I’m still trying to convince my publisher that I need an actual clockwork dragon—purely for promotional purposes.


Then I’ve got a 3 book YA/MG series (The Chronicles of Nerissete—Everlast, Evanescent, and Infinity) coming out in September, October and November of this year under the penname Andria Buchanan about a group of kids who fall through a book of fables into the World of Dreams  and they have to lead the world in revolution against a despotic wizard who just refuses to die.


Then let’s not even get started on my WIP folder. I’ll probably never get it all done but I am starting to play with a series about a group of not so super heroes from St. Louis who are all trying to just find love. Yeah,  basically I have no life and just write all the time.

And now some just for fun questions...


If the Speak of the Devil series were being made into a BBC Radio series and you could choose whomever you liked as the voice talents who would you love to play your characters?


PAE: Oh radio comedy so it’s just the voices? And it’s BBC so it needs to be british actors.  Let’s see:


Matt: Richard Armitage (basically I’d let this guy read me the phone book if he wanted. And then I’d die happy.)


Tolliver: Benedict Cumberbatch (because trust me the Archdemon of Gluttony really needs to purr and this is the man who can most likely do it well).

Matt’s ex, Brenda, causes some tub-time havoc for Lisa that readers will just have to check out for themselves. If DEVIL MAY CARE inspired a spa treatment what would it entail?


PAE: If Devil May Care inspired a spa treatment—probably a very long massage. One of those where those tiny women like walk on your back or something. I think by the end of Devil May Care Faith definitely needed a massage. I know I did.

If you found yourself stranded in Purgatory what 3 things featured in DEVIL MAY CARE would you want to have with you?

About DEVIL MAY CARE: 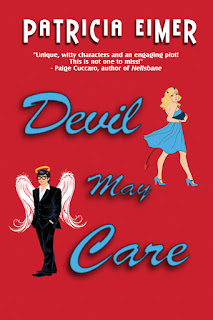 Being the Crown Princess of Hell has its drawbacks. Faith Bettincourt has to plan two demonic weddings for Satan’s royal family, and after finalizing the hellish details, all she really wants is to spend some time with her nephilim boyfriend, Matt.

But Matt’s heavenly ex, Brenda, walks back into his life, claiming to seek refuge from the crazy life he fled years ago. Faith sees right through the goody-two-shoes act but can almost let it go, until she discovers Matt’s crazy mom is involved…and is declaring war on Faith’s family. With her heart set on breaking them up, the matriarch of Heaven has kidnapped Faith’s brother, one of the demonic grooms. Who knew the heavenly could be so, well, devilish?

Now, Faith and Matt have to go up against the army of so-called do-gooders to restore some semblance of peace between Heaven and Hell. Clearly, not all’s fair in love and war, though, and Faith needs to decide what price she’s willing to pay for love…before someone else decides it for her.

LUCK OF THE DEVIL (#1) and DEVIL MAY CARE (#2)
are available on Amazon and many other retailers
both as ebooks and in print.

a Rafflecopter giveaway
Posted by Rhianna at 2/26/2013