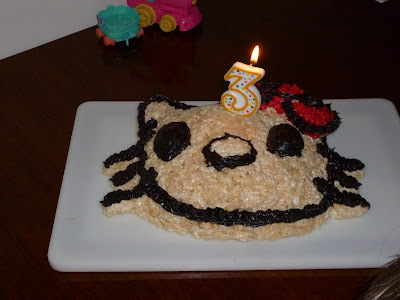 This week was not my week. I can't even believe it's already Friday. I'm doing some serious head/desking. What on Earth happened this week?

• Sunday day was filled with cooking and night was overfilled with TV to watch so I missed Once Upon a Time & 666 Park Avenue
• Monday night was Castle and stepkid drama
• Tuesday I spent 5 hours laboring over the above 'cake' for tot's birthday (strangely enough it's the same amount of time I spent bringing her into the world), birthday fun, and then TVD dvd scram session before SoA
• Wednesday I attempted to play catch-up with email, had a stepkid related school meeting, son's last football game (they won!!!), & dinner out before American Horror Story
• Thursday kids were out of school and it was Vine day, lots of kid mouthing and attempting to clean house, plus stuck camping thechivery for the latest T-shirts for my guys, then an evening of Beauty and the Beast and Elementary while hubs is out having beers
• Friday... gawd only knows what I have on my plate for today... errands and kid stuff most likely...

Which brings us to this weekend where I'm frustrated because I haven't had a lot of reading time all week. I'm frustrated. I've been working on All the Broken Pieces by Cindi Madsen, which is pretty good but frustrating in its lack of reveal so far. I think I know where the author is going but need some details to soothe my inner book devourer while I'm stuck being busy with life. lol If you like a great mystery with a splash of romantic subplot I think you'll enjoy it. I think I'll be part of the blog tour so be on the lookout in December.

Anyone else have a book they're reading and enjoying but struggling to get time for? Are certain times of year really bad for that? I always find the first week of school is one of the worst for me but strangely holiday break I find more time even though I'm way busy with cooking, cleaning, kids, gift wrapping, and stuff like that. I'm looking forward to it and kind of agonizing over how behind I am on my reading goal for the year. :(

Well, on that note I better go get on the day's chores so I can sit down with a book at some point. Have a lovely weekend! -- Rhi

The cake looks interesting. Better job than what I could have done. xD