Sexy Snippets: DOWN FOR THE COUNT by Christine Bell

Tuesdays have never been so sexy!
Sexy Snippets is a weekly feature hosted by Reading Between the Wines for the 18+ crowd.
My ♥ for Christine Bell is well known here at RhiReading so it's been notably difficult not to dive into DOWN FOR THE COUNT the second it hit my inbox. Much thanks are owed to Sarah from Entangled for not forgetting about sending it to me considering how long ago we were talking about it. ;) As soon as I finished the other romance I was reading yesterday I pulled it up and immediately was interupted. Which turned out to be good because I read 60% of it in one sitting last night. I would have read the whole thing but sleep is kind of a neccessary evil. In the meantime... please enjoy this tame teaser of the hawtness that this book has to offer... it gets much, much hotter right after that. -- Rhi 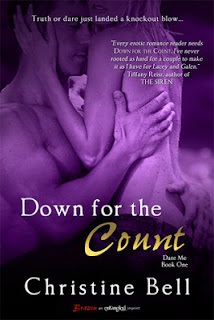 “How about a compromise? One kiss, here under the waterfall, so I can remember this exact place and moment of freedom with you. No regrets.”

His mind was racing faster than Usain Bolt at the Olympics. He was so caught up with the After all the times I’ve thought of part, he almost missed the invitation. Almost.

He plucked the drink from her fingers and set it on a flat rock, then took her hand. He didn’t speak as they made their way toward the waterfall, afraid to break the spell. When they reached the shelf of rocks beneath the rushing water, he turned and put his hands on her waist. “Ready?”

She nodded, her eyes wide, and he stepped under the spray, pulling her in with him. For a second, they were pummeled with a hard blast, but then it was gone, and they were behind the wall of water, tucked into the hidden space behind the waterfall.

In spite of her obvious nerves, she stepped closer, bridging the gap between them until they touched. “This is for watching my fights and rooting for me,” he murmured, pressing a soft kiss to her forehead. “And this is for being brave and accepting my dare.” He pressed a second kiss on the tip of her nose. “And this is for dumping that dickhead Marty.” The next kiss landed on the corner of her mouth, and she parted her lips on a sigh. His heart hammered so loudly, he wondered if she heard it.

“And this one? This one is because I want you so bad, it’s making me question my sanity.” He tipped his head low as blood rushed to his ears, the grind of need demanding that he slant his mouth over hers and take and take and take. But when his lips touched hers, he was consumed by an even stronger desire to sip and nip and taste. He traced her plump bottom lip with the tip of his tongue, then sank his teeth softly into the tender flesh.


Want to know where that kiss leads? I suggest you grab your copy of DOWN FOR THE COUNT today!

Ack, I can't read your snippet because I just started reading this book like an hour ago! lol But if you joined in Sexy Snippets with it I know I'm in for a fun ride! ;)