Tuesdays have never been so sexy!
Sexy Snippets is a weekly feature hosted by Reading Between the Wines for the 18+ crowd.
I don't always read Sexy Snippet worthy fiction but when I do it'll melt your socks off... lol
I've been working hard on Beyond Shame by Kit Rocha, whom you might also know as Moira Rogers, whom you might also know as Bree and Donna. This dystopian erotica is seriously dirty but frighteningly engrossing. I never thought I'd get this interested in something that takes the erotic beyond my comfort zone. But not only is it steamy (as you'll see below), the storyline and premise of the series is really readable.

Be sure and drop by their new website to find out more about BEYOND SHAME and more titles coming up in the series! Happy Tuesday guys! -- Rhi
Follow the jump for some seriously filthy talk... 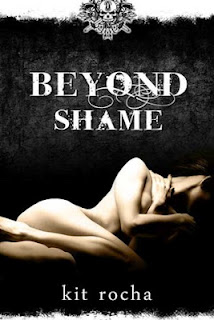 Noelle groaned and rocked on the seat, so hungry she didn't care if she looked shameless. "Have you two done this a lot? Tied a girl up and made her listen to you talk dirty about what you were going to do to her?"
"Oh, she's cute, Jas. She thinks we've been talking dirty."
"Ace isn't dirty," Jas observed conversationally as his hand drifted down, over the waistband of her skirt. "He's obscene."
Lower. Lower. If she thought it hard enough, maybe he'd slide his fingers over her wet panties and realize how close she was to shaking to pieces. "What's the difference?"
Ace finished the final line with a flourish and reached out to catch her chin, forcing her to look at him. "Dirty's saying I'm going to make you come. Obscene's saying I'm going to spread your pretty pink pussy lips open and spank your clit until you come all over my face."
Oh God.
Jas chuckled softly. "Obscene makes for quite a show, doesn't it, Noelle?"
Obscene made her clench tight in anticipation. Not even embarrassment could banish the entrancing image, though her imagination put Jasper between her knees. His hand opening her, his fingers delivering punishment and pleasure.
She wet her lips and closed her eyes. "I like it."
The hem of her skirt inched higher on her thighs. "How much?" Jas asked.

Oh boy! Umm...I need a minute....lol
How did I miss this? I'm heading over to their new website now. ;)
Thanks for joining SS girlie!