Sexy Snippets is a weekly feature hosted by Reading Between the Wines for the 18+ crowd.

Dear readers, I couldn't help but join in on Sexy Snippets today because this book has just been raking me over the coals with steamy, sexual tension. Can't wait to have Misa here to talk about the book later this month but in the meantime... I dare you not to salivate over this sexy little teaser! ♥ -- Rhi

Deceiving the Witch Next Door by Melissa Bourbon Ramirez 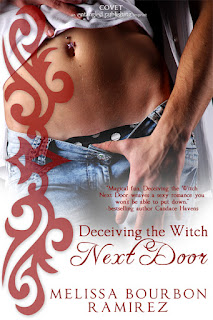 Patience, he told himself for the third time. Aloud he managed to growl, “Stop.”

She opened her eyes, the desperation and heat in them scorching him. “Reid—”

He dropped his hands, breaking the connection. “I told you we could have some fun,” he said, grinning. Truthfully, raising one corner of his mouth was all he could muster.

She leaned back against him again, her breath labored. “This isn’t fun,” she said, her voice barely above a whisper.

“Of course it is.” He had to touch her again. He slid both hands down her sides, letting them drift over the front of her thighs until they settled on the inside of them, barely touching her. He managed to summon every ounce of strength and stay away from the space between her legs, the place he wanted nothing more than to devour. He wanted to hear her moan. To say his name. To beg him to make her come.

*ARC courtesy of Entangled Publishing, may not reflect the finished product.

Deceiving the Witch Next Door is available now in ebook format from your favorite ebook retailers including Amazon. Or add it to your shelves on Goodreads.

Oh yea! This is sizzling hot!!! Love the teasers, girlfriend :)

New Follower. OMG... Love this teaser. I need this book like now. I want more. Adding to my TBR list. Love it when the hero has to touch the heroine. Have a great week.

Yay, you did a SS! ♥♥♥
Now I am regretting not getting this one for review, wowza!

Seriously guys it was fricking HAWT. Like I had to take breaks cause it was making me feel like I shouldn't be 'watching' them. My favorite of the 3 Covet launch titles on sheer hotness.