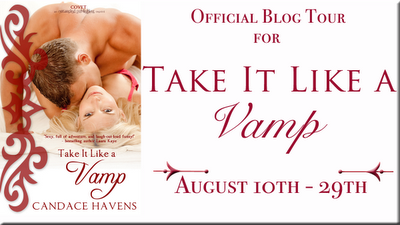 Dear readers I am so excited to have author Candace Havens here at RhiReading today! You guys know how I struggle with interviews because original, interesting questions are difficult to come by but I accepted the challenge and Candy just completely rocked them. :) I hope you'll enjoy reading it and that you'll add TAKE IT LIKE A VAMP to your to-be-read pile really soon! ♥ -- Rhi


Witches and Warlocks, Demons and Dragons... you’ve played in the paranormal pool before but not with Vampires. What made you decide it was time to write a vampire’s tale?

Candy: I never planned to write about vampires, even though I love them. My editor mentioned an idea about a friends-to-lovers stories involving a vampire. I told her I wasn’t interested, and then a few seconds later an entire book formed in my head. I couldn’t write it down fast enough. Now I can’t wait to write another vampire book.

TILAV’s hero, Nick Christos, sounds like he has a lot on his plate. When he’s not busy doing the leader thing and dodging his psycho ex he finds solace in his sweet human neighbor, Casey Meyers. When TILAV starts, how long have they known one another and what was their first meeting like?


Candy: They’ve known each other about nine months. She’s been living with her Aunt Teddie, who is a former tech billionaire. Casey’s parents were killed and she went to live with her Aunt, which was where she met Nick, who owns the building. It was friends at first sight for them. Teddie’s the one who introduces them.

You have an awesome playlist of songs for TILAV, if you had to pick just one for Nick and  Casey, which would be their anthem?

Candy: I’d have to go with Gavin DeGraw’s “I’m in Love with a Girl.” “I’m in love with a girl who knows me better, Fell for the woman just when I met her…” I think that’s probably Nick’s anthem, but he’s singing about Casey because she’s strong and she always has his back.

I don’t usually like to ask the ‘movie casting’ question to authors in an interview but as an entertainment journalist you’ve interviewed so many I imagine you’d have great insight into whom could bring Nick and Casey to life on screen. Would you care to share your thoughts on screen casting if TILAV were ever made into a movie?

Candy: Wow! That’s a tough one for me. In my head, Nick looks a bit like Liam McIntyre, who played Spartacus on Starz in the last round. He took over for the lovely Andy Whitfield, who passed away. It’s more about the eyes and hair than anything. If you’ve seen that Spartacus Vengeance poster you know what I’m talking about. Casey is a little tougher for me. She looks just like the girl on the book cover. She’s curvy, so we’d have to plump up one of those Hollywood actresses.

Candy: I honestly don’t think of them as category. They are shorter books, and usually a really fast read. I got kicked around a little for world building, but there’s not a lot of time in a category romance. But I think we have the opportunity to help the reader dive right in for a very fun ride. And the focus is the romance, always. It’s no different than any other kind romance, except it’s about 10,000 words shorter.

You’ve got an impressive backlist for readers to devour if they haven’t already, so what’s up next?

Candy: First, Thank you! I loved these questions. Let’s see… I’ll be doing a sequel to “Take It Like A Vamp.” Everyone, including my editor, wants to see Linc’s book. But first I have to finish a shifter book a started. I have a steampunk series which features a character, who is like a female Sherlock Holmes, except that she kicks butt like Buffy. The first book is called Iron Demon and I think that’s out in October. The first novel in that series, Iron Bound, is out April 2013 (again, I think). I have a new Harlequin novella out with Lori Wilde and Kathleen O’Reilly (I’m still pinching myself about being in a book with two of my favorite authors) that’s called “All I Want for Christmas.” I have more Harlequin Blazes out in 2013 and 2014, but I don’t have titles. And there are five projects that will be out in 2013 that I can’t talk about yet. I’m going to be very busy. (Smile)


Looks like RhiReading fans have a lot to look forward to in the coming months. :D Thanks for being here today and answering our burning questions! 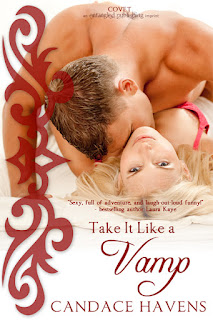 You can pick up your copy of TAKE IT LIKE A VAMP which is only available as an ebook from Amazon, Barnes & Noble, or Books On Board.

I have been busy doing other things, so I haven't updated my blog or read really anything. xD

I am really looking forward to reading Reaver from the Demonica/Lords of Deliverance series by Larissa Ione. He has been an important character and I can't wait to learn more about him.
June
manning_j2004 at yahoo dot com

Thanks so much for letting me hang out with you! Loved your questions. :)

All of the ones in Lara Adrians Breed series.

When I read the first book in J.R. Ward's Black Dagger Brotherhood I fell in love with Zadist. He eventually got his own book which was amazing and to date is my favorite of the series.

I would love to read this story! CONGRATs on the release Candy!!!

My fav secondary character is Payne from J.A. Saare's Rhiannon's Law series... such an awesome vamp!

OMG I've been so busy this week guys. Anyways... one day left to enter! Would love if you'd share it with your friends so more folks discover this one. ;)

Thanks for entering and a huge thanks to Candy for being here! I simply love working with Entangled's authors, publicists, and now multitude of imprints. :D

Great interview! I haven't read a paranormal in awhile. I've been hooked on cowboy stories. I fell in Love with Vicki Lewis Thompson's Chance men. When a half brother was introduced last fall I couldn't wait for his story. It's out! Now to have time to read it hehe So many books (to read AND write) so little time.

Great interview, and this book is going on my TBR even if I don't win!!

I love Luc and Lindsay from Chloe Neill's Chicagoland Vampires Series. I'd really like their own story to flesh out each of their issues and be a real couple. Here's to hoping my wish comes true!