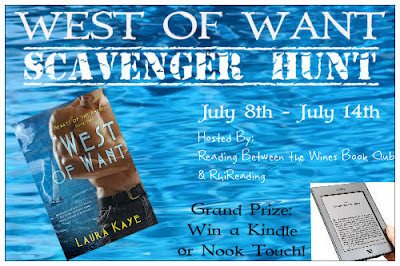 West of Want Scavenger Hunt
Celebrate the release of West of Want, Laura Kaye’s second book in her hit fantasy romance series, Hearts of the Anemoi, with the WEST OF WANT SCAVENGER HUNT and enter to win an eReader just by playing along!


The Hunt:
The Scavenger Hunt will run from July 8th – July 14th, 2012.
We have six fantastic book bloggers participating in the hunt including Laura Kaye’s own blog! At each blog stop there will be a special exclusive excerpt from WEST OF WANT with a hidden word that will be highlighted in bold & red.  Readers can collect each of these hidden words and unscramble them to unlock a secret WEST OF WANT phrase.  Once you’ve collected all of the hidden words and unscrambled the secret phrase, fill out the RaffleCopter with the secret phrase to enter!


The Prizes:
Grand Prize: (1 Winner) A Kindle Touch or Nook Simple Touch (Valued at $99.00, winner’s choice) and eBook of West of Want by Laura Kaye
2nd Prize: (2 Winners) Signed print copy of West of Want by Laura Kaye and a West of Want Swag Pack
3rd Prize: (3 Winners) eBook of West of Want by Laura Kaye
The Fine Print:
Must be 18 years of age or older to enter
Grand Prize is open to wherever Amazon Kindle/Barnes & Noble Nook is available
2nd and 3rd prize winners are open Internationally
No purchase necessary
No substitutions, refunds or cash value will be given
One entry per person, per household
Void where prohibited by law
All entries will be verified
Winners are drawn randomly through RaffleCopter
Winners will have 48 hours to respond with winning notification email before a new winner is selected
Giveaway will close at 11:59pm July 14th, 2012
Here's today's exclusive excerpt and hidden word: 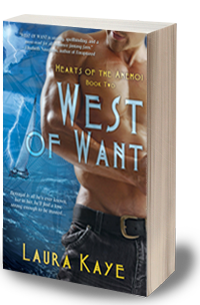 Zeph concentrated and allowed his mind to travel in search of his brother’s unique energy signature. As polar opposites, their energies were connected. Yin and yang. Life and death. West and East. So he found Eurus, easily. Within blocks of Ella’s house. Thunder rumbled around him as he flowed through the air in pursuit.

Corporeality returned in a blaze of light, his seething rage crackling around him.

“Ah, brother. I’ve been expecting you,” Eurus said. In the gloom of twilight, he lay prone on the dock in the middle of the marina where Ella’s boat had been taken that first day. Ankles crossed. Fingers making lazy designs in the air as if he were conducting a symphony. Cold wind whipped up around them, turning the calm waters of the inlet choppy, jostling the sailboats in their slips.

His brother’s calm, casual repose was more disturbing than if Zeph had found him petulant and ranting. Because it meant he was planning. “What the fuck are you playing at, Eurus?”

He sprung to his feet and tugged the lapels of his leather coat. “You see? I offer civility, and what do I get in return?”

Zeph squared off and braced, ready for anything. “You don’t have a civil bone in your body.”

Eurus pinched the bridge of his nose, shifting the wraparounds up the smallest bit. Though not enough, Zeph was relieved to see, to reveal his dead black irises. “If what you say is true, brother, whose fault exactly would that be?”

“Not. Mine.” It was a fruitless conversation, but it was their little dance, and Zeph’s own special corner of hell.

“Of course not yours. Not perfect Zephyros. Not the god of life and renewal. Gods forbid.”

Zeph ignored the barb. Perfection was the last thing he believed of himself. Eurus was jealous of a figment of his imagination. “What do you want?” he finally bit out, hoping to defuse the other man, to delay the confrontation long brewing between them.

Eurus whipped off his glasses and drilled his disturbing, blank gaze into Zeph’s very soul. “Leave the woman alone.”


When you've found all of the secret words and unscrambled them to form the secret WEST OF WANT phrase enter it in the Rafflecopter below! Thanks for playing! ♥

Am loving this series ! Cant wait to read this one !! Great excerpt !! and once again smokin hot cover !!

Excellent excerpt. These too are like oil and water. I hope they can settle things. Hate to see brothers against each other.

I love a really bad, take-no-prisoners villain and trust me ladies... Eurus is the worst!

Be sure and keep following the exclusive excerpts each day and collecting your secret words to enter the giveaway. ;)

It just keeps getting better. You're such a tease, Laura.

Woohoo! So glad you're enjoying the excerpts and the hunt! :D

Now that was an ominous excerpt. Each one has been great.

Ooooh Love it! Seriously cannot wait for this to hit the shelves!

Awesome! Glad you guys are enjoying! Thanks so much!

This is an intriguing excerpt. I want to see where it goes. Thank you for participating in such a fun giveaway and game. :)

All of these snippets are just too intriguing and hot!!!

Like this contest. I'm working for the prize. Love the excerpts.

Holy cow, 4600+ entries!! I think we can proclaim this Scavenger Hunt a huge success! Long live the sexy, sexy Anemoi! <3