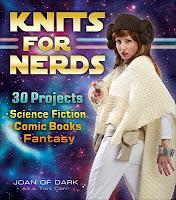 Crafts, Knitting, Geekery
Paperback $16.99 (144 pages, ANDREWS MCMEEL)
Ebook $9.99
Release Date: February 21st, 2012
The best of science fiction, manga, and animaguiri meets knit one, purl two as knit siren and part-time roller derby girl Joan of Dark offers up an out-of-this-world assortment of knitting nerdiness inside Knits for Nerds. The patterns for 30 iconic clothing and accessory items inspired by popular TV shows, books, films, comics, and more--including Star Trek, Lord of the Rings, Star Wars, and Firefly--are presented alongside full-color photographs showcasing completed projects, such as:
* Lieutenant Uhura's sexy Star Trek minidress
* Hobbit feet slippers
* Firefly-inspired scarf, socks, hat, and jacket
* Tank Girl socks
* Hermione Granger's secret beaded bag
* Manga-inspired leg warmers
* The Big Bang Theory-inspired his and hers sweater-vests
* Lord of the Rings-inspired shrug
In addition to a wardrobe of costume finery, hobbyists will also find instructions for practical projects such as an e-reader cover or a laptop bag crafted of checkered fabric that serves double-duty as a chessboard and carryall, as well as patterns for plush toys inspired by Star Trek, robots, and the comic book Squee! Wear (and knit!) your nerdiness on your sleeve with Knits for Nerds.
Publisher Site: www.andrewsmcmeel.com

For the record, I don't knit. I attempted to learn it in high school and it was surprisingly frustrating that I just could not GET IT. I've tried again since then only once more and realized it just wasn't going to happen. So with that in mind I cannot rate this book's instructional quality or actual patterns. But I picked it up more for my love of all craft and cookbooks focusing on geekery.

What makes this book an ultimate win is that this isn't just for one kind of geek. There's something for every geek. From comicbook and film fandoms to science and gadget geeks. Star Trek and Firefly fans get the best loots in KNITS FOR NERDS. Clothing and accessories make up the majority of projects from socks and hats to scarves and sweaters but adorable toys and handy bags fill your fandoms with love.

What really impressed the geek in me was that Carr didn't focus only on well-known fandoms such as Dr. Who or Harry Potter. Readers of my book blog will be super psyched to know that the very first project in the book is a scarf inspired by the Alchemists in Richelle Mead's Vampire Academy (and Bloodlines) series. Other book related projects include a stunning shawl inspired by Wicked Lovely, Hobbit feet slippers, and Temeraire inspired Dragon Rider Gloves. Love Neil Gaiman? Not only are a few of these projects inspired by his work but many of the photos in this book were taken at his home!

Strangely enough the real gem of the book is the Introduction. It is—and Carr actually says so—a 'love letter to the nerd community'. There's just something charming and utterly heart-warming about the passion and creativity that oozes from every single page of this book... a knitting book of all things! So while I may not knit I absolutely loved this book and really wish I knew a knitter who would make me the Aim to Misbehave Brown Jacket, it is quite possibly the coolest fan project I have ever seen and completely wearable by a non-fan too!


Notes: ARC received via NetGalley. Review cross posted from my other blog.