Something I've been meaning to share for a while...

Back in October author Tara Maya sent out one of her newsletters which I always enjoy even though I've been buying her books but have yet to read them. She said to feel free to share her story and it moved me so much at the time I had to put it on hold. Today seemed like a good day for sharing it. I hope you will read it and be as touched as I was, that it will inspire you. But please also make sure you read past the jump because Tara is giving away copies of her new book and I want you to know how to get one! -- Rhi


Being Different, Being Bullied...


I was watching a classic teen movie with my friends one day -- this was when I was in highschool myself -- and enjoying the romantic antics. Then one little scene in the movie ruined it for me. A nameless side-character, wearing a huge, awkward backbrace, struggled to get a drink of water, but couldn't suceed even that simple task because the brace got in the way.
Apparently, this was supposed to be hilarious.


The scene was just a sight gag and over quickly, but I sank in my seat, unable to enjoy the rest of the movie. Actually, I didn't sink, so much as sit straight up, because I too wore a huge awkward backbrace. I had been diagnosed with scoliosis my freshman year in high school. I can still remember my disbelief when my doctor told me I would have to wear a backbrace throughout my four years of highschool. I couldn't think of a worse time stand out as different...and not in a good way. Highschool was supposed to be all about meeting boys, having fun with my friends, oh, and maybe some studying. I had been ectastic when I made the Cheerleading Dance Squad. Nothing caught the boys' eyes like wearing that signature short skirt around campus every Friday!


I cried all the way home from the doctor's appointment. Now everything was ruined. My highschool years were offcially doomed to suck.


Not so, my mom insisted. There was no reason I couldn't be on the dance squad. I didn't have to wear the brace during practice or performances, and it actually didn't interfere all that much with my movements during the rest of the day. She told me, "Don't give up on your dreams just because of a few bumps in the road."


She was right that the brace didn't stop me (physically) from dancing. But I was right that people's perceptions of me changed because I had a disability. So it became a contest between whose reality would win: Mine, where I was capable of doing anything, including dancing... or theirs, where I was nothing but a freak in a brace, whose incompetance was good only for a sight gag.


Then things got worse.


The leader of the Cheerleaders took it upon herself to make my life so miserable I would quit. Before she knew I wore a backbrace, she thought I was "terrific" and she was "so happy to have me." But after she found out I had to wear a brace, she decided I was not cool enough to be on her team. She tried everything to make me give up.


I kept dancing. Did the pain of being rejected go away? No. It was there, and sometimes, to be honest, I felt it all come crashing back down on me again.


That's how I felt when my book kept coming back from agents and publishers, rejected. Even when they loved the book and praised my writing, they turned it down because it was too unique. Was it epic fantasy? Young adult? Paranormal romance? It had vivid and rich world-building and a vast scope of characters and battles, like epic fantasy. But the main character, Dindi, was young, and suffered a lot of problems, like being bullied, that made the story appeal to young adults. And beneath it all was a romance, for as Dindi grows into her power, she finds her enemy is the man whom she had once -- and still -- loves. So how do you place a series like that?


Once again I was told, "We have no room for you on our team."

Being Different, Being Dismissed...


I did sell two other books (under a different pen name) to a traditional publisher, but I couldn't find a home for Dindi and Kavio, for my fantasy series.
Then ebooks came along and changed everything.


I created my own publishing house, Misque Press. I felt awkward and freakish being "self-published." That wasn't how books were "supposed" to be published. It was a huge disability in the book world. Most reviewers wouldn't accept indenpendently published ("indie") books and many readers were distainful of them. When I told my family I had published a book, they were excited... until they found out how I had published it.


So it became a contest between whose reality would win: Mine, where it didn't matter how a book was published, only how good that book was... or the naysayers, who said a book should be condemned without a trial.


I didn't expect to sell millions right out the gate, and that's a good thing. Because the first month, I only sold 12 books.


But I didn't become a writer because I expected to get rich at it. Everybody in the world had promised me that would never, could never, happen. I didn't care. I write because I love it. I love my characters, I love my world, I love to share them. So... I just kept writing. And then the sales started building... and building.... and BUILDING.... Fans started writing in. Furious emails demanded to know when the next book would come out because the last one ended on a cliffhanger!


If the overwhelming response to The Unfinished Song is any indication, I guess I did.


Just like coal that gets turned into a diamond, pain can sometimes be turned into a source of strength. It all depends on what you do with it. I took the pain I remembered from highschool and turned it into a fantasy story about a girl who is told she can't dance because of who and what she is. And every time I faced another rejection, I remembered what my heroine said to herself: "Just keep dancing."
I bet there is something you've always dreamed about, something you want to do, some plan you have for yourself. And the more worthy a plan it is, the more true a dream it is, the more likely it is that you've already encountered people who have told you why it's impossible. They've told you it can't work, that it costs too much money, that it's too risky. Or maybe they've made you doubt yourself. As if this dream only works for someone else, but never for you.


Well, I just want to tell you, don't believe them. 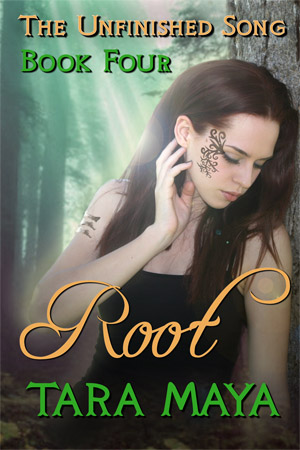 Want to know how to get your copy of The Unfinished Song: Root for free?
"I will give away a copy of this lovely book to the first 100 new subscribers to my list."
Which means all you need to do is get subscribed to her newsletter through this form. If you haven't started the series yet the first book is currently available for free on Kindle via the link below!
Connect with Tara
Blog | Facebook | Twitter
You can find Tara's Unfinished Song books in many places but here are the links to Amazon:
Posted by Rhianna at 11/30/2011