It's Monday RhiReading fans! Did you remember to set your clocks back this weekend? I seriously wish they'd do away with that crap already. It's dark for 2/3 of the day here during winter whether you change the clock or not. Know what I mean?

Well, no matter what the clock says... at least we have time to chat about what's on the tube that falls into our favorite subjects... authors, paranormal, horror, fairytales, and sexy anti-heroes!

Oh, and I was so sick on Friday I couldn't muster the strength to sit through Grimm but if you think it should be added to the TV Monday's schedule why don't you check out the poll in the sidebar and tell me what you're thinking of the show so far.

Check out this week's schedule, watch the previews, and discuss last week's episodes.

Please be aware that if you're behind there may be unmarked SPOILERS in the comments.

(all synopsises courtesy of TVguide.com or the show's site)
Castle

"Heartbreak Hotel"
Season 4, Episode 8
When a casino owner is murdered at an abandoned warehouse, suspects emerge in New York and Atlantic City; during the investigation, Castle throws an impromptu bachelor party for Ryan.
Death Valley
Get More: Death Valley, Full Episodes
"I Hit A Zombie In The Face"
Season 1, Episode 10
The officers try to take back their precinct after a zombie invasion.
Note: Trying to sort out the episode names and such for this show is a pain in the arse. If this is wrong info I do apologize.
Sons of Anarchy

"Hands"
Season 4, Episode 10
Jax and Tara taste life after SAMCRO, but discover just how hard it is to escape it. Meanwhile, Gemma discovers that Clay has emptied out the safe at their house; no one in the club can locate Juice; and Sheriff Roosevelt confronts Lincoln Potter.
Revenge 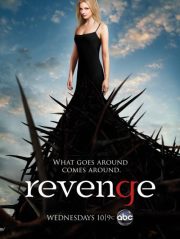 Note: Due to the CMA Awards there will be no Revenge next week.
American Horror Story
"Piggy Piggy"
Season 1, Episode 6
Constance enlists Violet's help in dealing with Tate while Ben helps a new patient confront his fears.
Notes: Anyone else feel guilty about how much they enjoy this F'd up show?
The Vampire Diaries

"Homecoming"
Season 3, Episode 9
Rebekah opens up to Elena on the night of the homecoming dance. Meanwhile, Klaus puts his latest plan into action, but Damon enters into a dangerous partnership to stop him. My Morning Jacket perform.

"Balcoin"
Season 1, Episode 9
Cassie tries to find out more about her lineage to see why she has powers separate from the circle. Meanwhile, Faye stirs up trouble when she reveals that Jake is hiding something dangerous from them; Melissa's cute cousin visits and catches Diana's eye.
Once Upon a Time

"The Price of Gold"
Season 1, Episode 4
Emma tries to help a pregnant woman get away from Mr. Gold; Cinderella makes a deal with Rumplestiltskin.

The Walking Dead
"Chupacabra"
Season 2, Episode 5
While searching the woods for clues, Daryl is seriously injured and set upon by walkers. Meanwhile, Rick second-guesses himself; and Glenn believes he's getting positive signals from Maggie, but then isn't so sure.
Posted by Rhianna at 11/07/2011