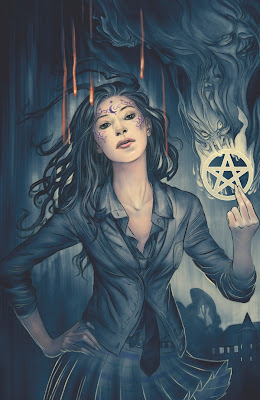 While I've actually been buying and shelving them for a while, I still haven't read any of the House of Night series. Crazy right? But once I heard Dark Horse was bringing them to life in comics I figured I'd be likely to make them a priority at some point before years end. In the meantime I was able to preview the first six pages thanks to NetGalley and wanted to share my thoughts as a series newbie.

First, I suggest you pop on over to Dark Horse's blog and read this introduction from Kent Dalian (who is doing these adaptations as well as the screenplay) and P.C. Cast. I was really happy to see that Cast feels her world is in the right hands. Nothing builds my confidence in adaptations—be they film or graphic novels—more, than to see the creator this pleased with the hands reshaping their vision.

Since I'm unfamiliar with the series I can only look at it from the perspective of a comics reader. That said this is absolutely stunningly done and I'm not even refering to the covers. The art from Joëlle Jones and Karl Kerschl really plays well with the storyline. I expected something lesser, to be completely honest, but the artists here know what they're doing. After just six pages I'm tempted to call up my local comic shop (in spite of having had poor luck with anything not super heroes or pure horror there in the past) and beg them to save these for me. There's a certain flair to the body language in each panel that is subtle but says a lot which is essential to a comic, especially one where there isn't a bunch of fist fighting or flying going on.

If I wasn't already buying the series and had picked this up on a comics run this would definitely get me wanting to check out the series to know more about these characters and their world. Six pages just isn't enough darnit! I hope you'll be lining up with me to pick this one up on November 9th. You can check out more about the two issues available for pre-order below:

House of Night #1
Jenny Frison Cover ($1.00)
Steve Morris (variant) Cover ($2.99)
Release Date: November 09, 2011
Until recently, Zoey Redbird was an average high-school student worrying about grades, boys, and breakouts. But priorities have a way of changing when you are marked as a vampyre, enroll in the vampyre academy House of Night, and have to figure out a whole new social hierarchy, affinities for elemental magic, and physiological changes that make you crave blood.

House of Night #2
Jenny Frison Cover ($3.50)
Release Date: December 14, 2011
Struggling to understand her connection to the vampyre goddess Nyx and her elemental affinities, Zoey Redbird's got her hands full at the House of Night. Add needing a plan to revamp the student group known as the Dark Daughters, and this third-former vampyre's in need of a hand. Turning to her friends, Zoey hopes to gain clarity in her quest to understand where she fits into the modern world of vampyrism.
Posted by Rhianna at 10/04/2011