This weekend marks two special days for me. Saturday is my 3rd Blogiversary! I know I've only accomplished in 3 years about a quarter of what many have in a year but for me it's a milestone. I've managed to keep this blog going without a hiatus (unless the short absenses when I had the baby and the surgery really count) or loss of interest for three whole years. That's ages to me. But even more of an accomplishment if you will is my 12th wedding anniversary on Sunday. Somehow we've managed to keep making this thing called marriage work for a dozen years! One of the reasons I'm not a huge HEA fan is because I know firsthand how hard a real marriage (or life together as the case may be) is not simply "...and they lived happily ever after. The End." It's often more like "...and they lived miserably together half the time... and this was just the beginning." But there is a great joy to learning that real love, lasting love, is something that requires work, patience, and willing compromise. When you can work through the hard times together and come out the otherside stronger as a couple it's an accomplishment worth being proud of. 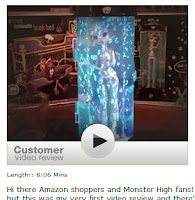 I wanted to also share something I worked on this past weekend. Something I'm both a little embarrassed over and super proud of. My very first video review!

Get hydrated with this totally ghoul Monster High playset for kids and collectors!

Okay, so it's not a book review... I'm not sure I'm ready to have to read a review on screen and kind of don't see the point... but I'm a big nerd for Monster High dolls. I would totally love it if you guys would go watch it and tell me what you think. I literally spent HOURS on that between writing the review up, setting up my table to just the right way, about 8 takes before I could get over my nerves and stop saying the wrong things or freezing up, and trying to get it formatted and resized for upload. It was really fun though and turned me onto the idea of video reviews in the future.

This weekend I'll probably be getting back to review reading and planning my themes for the next year. I honestly spaced on the blogiversary so I'll probably do a giveaway on my next special day... my birthday... next month. Yeah, something like that. In the meantime don't forget to visit me later in October for the Halloween hop, I have a great giveaway planned!

Hope you have a great weekend and that you'll leave a comment telling me what you're currently reading. Seriously, I love to know! :) -- Rhi
Posted by Rhianna at 9/30/2011