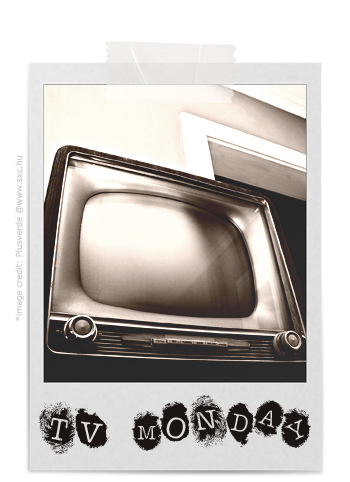 I have reading coming out of my ears today dear readers. I'm a slow reader and I swear the older I get the blinder I'm becoming. This week I'm trying to get Entangled Publishing's YA titles finished. In the meantime here is your TV schedule for the week... -- Rhi


Alphas
Season 1, Episode 4
"Rosetta"
Rosen and his team move against a Red Flag stronghold, and they find an autistic woman who helps expose a plot to launch a terrorist attack that could change things for the Alphas. (synopsis via TVguide.com)
Get More: Teen Wolf, MTV Shows
Teen Wolf
Season 1, Episode 10
"Co-Captain"
Scott scrambles to protect the people he loves, including Allison, who's beginning to follow clues about her family history. Meanwhile, Stiles is getting closer to solving the mystery behind Derek's family. (synopsis via TVguide.com)

Pretty Little Liars
Season 2, Episode 8
"Save the Date"
Mounting tension takes its toll on Emily, who winds up in the hospital. Meanwhile, Spencer and Aria try to link a broken field-hockey stick to Alison's demise; and Hanna deals with her dad's impending wedding and Caleb's possible departure. (synopsis via TVguide.com)

The Nine Lives of Chloe King
Season 1, Episode 8
"Heartbreaker"
Meredith grows concerned about Chloe's secretive behavior, so she searches her laptop. Meanwhile, both Alek and Brian get upset with Chloe, who then reaches out to Alek when a thief puts her and her mom in jeopardy. (synopsis via TVguide.com)


So the new ThunderCats was pretty cool. If you haven't checked it out yet the next new episode is Friday. Bonus: no more men in unitards!

ThunderCats
"Ramlak Rising"
The gang are trapped by pirates while crossing the Sea of Sand. (synopsis via TVguide.com)


Ep. 43 – Preview
True Blood
Season 4, Episode 7
"Cold Grey Light of Dawn"
Marnie's powers from beyond force Bill to take evasive, though unpopular, action to save vampires; Luna learns something new about Sam; Andy has a date with Holly; Jessica reconsiders her future with Hoyt; Alcide and Debbie run with a different crowd; Eric turns his amnesia into an asset. (synopsis via TVguide.com)
As usual the Falling Skies sneak peak isn't up yet...

It also looks like this week there will be two back-to-back episodes? I haven't been able to catch up since my trip so I'm totally lost here. Anyway I guess this weekend it's the finale. If you know otherwise let me know eh?

Falling Skies
Season 1, Episode 8
"Mutiny"
Growing tension divides the 2nd Massachusetts just as their ambitious assault on an alien base draws near. Meanwhile, Tom has trouble coming to grips with Annie's profound discovery and its implications. (synopsis via TVguide.com)

Falling Skies
Season 1, Episode 9 (season finale)
"Eight Hours"
In the season finale, the resistance fighters launch a bold attack against the aliens as Tom remains at the camp to protect the civilians. Twisting developments lead Tom to a close encounter of the harrowing kind, and mysteries about the aliens' motives might finally be answered. (synopsis via TVguide.com)
Posted by Rhianna at 8/01/2011

Don't forget about Eureka and Warehouse 13 on sy-fy:)

:) I've never watched either so I don't cover them but if you've been covering them totally let me know and I can link up to your post!