Dear readers, I stumbled upon Kevin Hearne by serendipity. When time permits I prowl the 'net for cover art and info for upcoming releases. When I looked up "Hexed" on Amazon.com I was looking to see if I could find the upcoming anthology which is completely unrelated to the Iron Druid Chronicles. Instead of what I was seeking I found Kevin Hearne and damn am I glad I did! 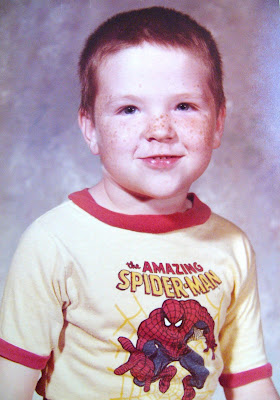 Welcome Kevin and congrats on the big debut! Now that Hounded has been out for a few weeks I'm sure there have to be some mixed opinions floating around the interwebs but honestly, most of what I've seen has been pretty glowing praise. Considering that I imagine you've been pretty in demand lately so thanks so much for granting RhiReading an interview.

‘Tis me own pleasure, Rhi, I assure you. I have a flagon of Smithwick’s at hand, some lovely music playin’ on Pandora, and I’m ready to answer anything that doesn’t involve math.

In getting my thoughts together for this interview I came across an interesting tidbit about how the Iron Druid Chronicles was originally intended to be a webcomic. Obviously conceptually that would have been pretty cool but as a lover of both the comic book medium and novels I have to admit I'm happy with the turn of events. What kind of comic book influences came to play in writing the series?

Since I’ve read comics since I was a wee lad (see author picture), it’s had tremendous influence on me in terms of the ability to visualize fight sequences and also keep my storytelling tight(ish). My editors actually have to force me to spend more time describing things; I added about five thousand words to each book in the series, and most of it’s description. I’m typically spare in my exposition because it’s the kind of thing I always skip when I’m reading.

One of my favorite parts of Urban Fantasy as a genre is a solid bit of world building. Certainly you could have kept it much simpler by limiting your world to say... a single pantheon or sticking with only deities. What kind of challenges, if any, did you find in creating a world where, for example, Thor could piss off a pack of werewolves?

Creating the world was EASY! All the gods are real. All the monsters are real. Done! My filter on all that is my first-person narrator. We’re only going to see the things that Atticus runs into; we’re never going to shift out of his head and say, “Meanwhile, in Kuala Lumpur…” Admittedly, Atticus is going to run into quite a bit, but it’s going to have a manageable structure and sequence to it. The challenge, for me, is to keep these deities and critters “authentic” yet “fresh.” (Yeesh, it sounds like I’m trying to sell some kind of ethnic food.) It’s always tricky to update these old figures for the modern day while remaining true to the spirit of their origins.

When I cracked open my copy of Hounded the first thing I did was read the pronunciation guide about a dozen times. In it you make sure readers know it's not a big deal if they get them right which probably made a lot of readers sigh in relief. (Gawd how I wish I was one of them). So level with us here... do you feel any pity what-so-ever for Luke Daniels, the voice talent for the audiobooks?

I do feel some pity for him, I do. But the director of those books, Max Bloomquist, gave me a call before each one and asked how to pronounce certain words. Sometimes they went by their own sources, and sometimes they used my guides, and for everything else they just had me say it three times with the recorder running. I have to say that I think Luke’s portrayal of Oberon is hilarious, and I’ve been very impressed by his accents for Laksha and the very subtle Latino flavor he gave to the voice of Detective Jimenez. I haven’t heard Hexed or Hammered yet, where the accents get really hairy, but I’m sure he did a spectacular job with those as well.

Atticus has been frequently been regarded using the term "rock star" by reviewers. Now I don't know if I'd quite go that far myself but there's something a bit laissez-faire about him that makes him unique among the stereotypical heroes of the UF genre. I suppose it's not the most original question but how are you and Atticus alike?

Physically speaking, we’re not at all alike. I’m not much of a badass and I don’t have any tattoos. But we’re both Irish and like the fish and chips at R·la B·la with a pint of Smithwick’s. We like doggies and geeking out over Star Wars. We both hug trees and wish people would care more about the environment. And we both love Shakespeare and language in general.

Now I am not a dog person, as those who have read my review of Hounded know, but from the first time I met one I've been rather fond of Irish Wolfhounds. What I suppose the average person doesn't know about the breed is what a gentle giant they tend to be in spite of their early purpose as a warriors. (Yes, I know way too much about them as I really wanted one and ended up settling for my evil German Shepherd instead). With that sort of quiet, easy-going nature the breed is known for I found the chatty nature of Oberon to be particularly endearing. What inspired the great mix of traits that boiled down into the Oberon your fans know and love?

I’ve always wanted to talk to my dogs. I have a pug and a Boston Terrier, and both breeds have such expressive faces that you almost feel they understand you. But any dog’s character, really, can be boiled down to a few basic drives: food, sex, belly rubs, sniffing things, and peeing on most of them afterward. They all want to please us and protect us and be loved for it. Oberon’s no different, except that he’s able to vocalize it.

While Oberon is probably the common favorite among the readership with his great doggy personality he isn't the only great secondary character. My personal favorite is the widow MacDonagh. Her shameless flirting and whiskey swilling are just plain awesome. Can we expect to see more of her in Hexed and Hammered?

Yes, the widow is definitely going to be featured in both books, and a bit more prominently, too, I might add. I have a soft spot for her as well, Rhi. She’s loosely based on my own late grandmother, may she rest in peace.

Speaking of your upcoming releases, it looks like Atticus is in for some wild adventures facing off with witches and perhaps a certain jerk of a Norse god. They'll be out in June and July, so when can we expect to see the fourth installment hitting the shelves?

I actually don’t have book four under contract yet; we’re all waiting to see how the first three books do! (And by the way, nothing says “I love you” more than the gift of The Iron Druid Chronicles!) However, if folks visit my blog, Writer’s Grove, there’s a neato-schmeato progress bar on the right hand side where you can virtually stalk me. Book four is called Tricked, and right now I’m about halfway through it. Once I have any news to report about it, you can be sure I’ll be shouting it across Twitter and Facebook n’ stuff.

I could certainly ask a dozen additional questions about your writing process, your geekery interests and upcoming projects but instead I shall close my queries with another thanks and best wishes for the series. Is there anything else you'd like to tell us about yourself, your work or some utterly random bit of Oberon-esque wisdom?

I want to say something to Kansas. I have never, ever had a good time in your state. The five days I have spent in your state—spaced many years apart, mind—have been the five worst days of my life. I would dearly like that to change, because now I have a fear of going to Kansas. I honestly think there is some malevolent spirit there that hates me. It may seem irrational and just an odd string of coincidences, but from my viewpoint Kansas is out to get me. You know how the Bene Gesserit in Dune kept talking about how there was one dark place in the center of the spice agony that they dared not go, and only the Kwisatz Haderach could go there? Kansas is like that place for me. I can go anywhere in America except Kansas. I almost lost my ears in Topeka! If you are from Kansas and are fairly sure that you can not only keep me alive but prove to me that it’s possible to have an enjoyable day within your borders, please, let me know and tell me what to do. I will face my fear; fear is the mind-killer.

Thanks, Rhi! I’ve been wanting to get that off my chest for about ten years now, and your blog just seemed the right time and place to do it! I feel much better about Kansas already!

You're very welcome Kevin and thanks a bunch for dropping by! (Note to self: Avoid Kansas.)
Posted by Rhianna at 5/28/2011