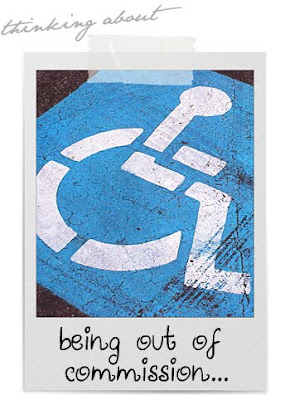 Poo! I finally got to the doc about my knees. I could barely walk by the time I saw her. Each step was like having burning knives stabbed into them. Thankfully I now know what is wrong. What I have is a syndrome with a lengthy name I couldn't pronounce after I left the doc's office. LOL (Aren't they all kinda like that?) But basically I have the knee version of tennis elbow, they call it Runner's Knee. Basically my knees move kind of sideways (curving outward) instead of straight (up and down). Weird huh?

Since I'm already going to be down and out on a resting regimen after the end of next week—the big surgery is Thursday and owie my arm still hurts from the pre-admit bloodwork!—I guess this is good timing. I'll basically be spending the next 3 weeks off my feet as much as possible. The doc agreed with me that this sucks though. Here I was trying to improve my health and I injured myself instead. Rotten, yucky luck.

I've been able to get in a little bit of extra reading time here and there though which has been nice. I have this BIG stack of Vine and unsolicited review books waiting for my attention. Not including my NetGalley choices. I'm also getting excited for Amazon's 2011 ABNA event. It starts the day I have my surgery but as long as nothing goes wrong I'll be able to just relax in my room and do the reviewing stuff. Any of you other bloggers/readers/reviewers taken part in something like that? This is my first time so I'm both excited and scared I'll muss it up.

So what's going on with my reading this weekend? I picked up White Witch, Black Curse and got it started but so far it's about as interesting as watching snails make love. :P You know it should be interesting but it's too slow to keep your attention for long. LOL It's bugging me so much that I'm not liking The Hollows books right now. Maybe I've just changed as a reader and they don't work for me anymore? I dunno. Anyone ever have that happen? 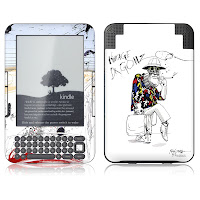 The hubs is having his birthday this weekend. He doesn't know it yet but he's getting a Kindle. He's not as big of a reader as I am but the more I thought about it the more I thought it was a good gift for him. Plus we can share our library that way. I also bought him a GelaSkins

for it that has Dr. Gonzo from Fear and Loathing in Las Vegas by Hunter S. Thompson, a book he enjoyed when we were in our dating phase. Isn't it cool? I figured it's different and not at all girly so he'd like it. I wanted to get him one with koi—perfect for my Pisces man candy—on it but the ones I found seemed a bit too feminine. Gawd, I hope he doesn't hate it! Ya never know with my man. 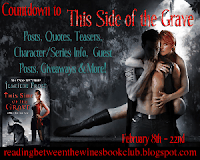 And speaking of my man... today he's got an interview for the Countdown to This Side of the Grave

(which I just realized I'm gonna have to pre-order for the Kindle so the hubs has something to read right away!) over at Reading Between the Wines. I don't share my lova' with just anyone but Crystal runs one hell of an awesome blog. So if you'd like a little sample of my man candy head on over!

In the meantime folks have a fab weekend filled with reading and hopefully no more damned snow. Seriously watching the weather channel is like a montage of a decades worth of bad snows... except they're all within the past day. So not cool Mother Nature. I'm off to try and wrangle the hubs into figuring out our birthday dinner/cake/going-to-see-I Am Number Four-plans and if I'm lucky I won't be the last person in this house to get a shower this mornin'. *wince* -- Rhi
Posted by Rhianna at 2/17/2011