I've said it before and I'll say it once more... one of the most difficult parts of living where I do is the climate. We have two seasons really. Winter and the Other Season. It snows here from September through May and occasionally we'll get a snow in the summer months. It can get pretty hot during the Other Season but mostly our warm weather is in the 70-80 region. Overall, living here is cold. This is the time of year too when the sun sets at 4PM. I'm not gonna lie... I get the winter blues bad. Some days I literally crave the feeling of warm sun on my skin. I fantasize about it. Today is definitely one of those days.

While sitting here trying to keep warm I wanted to share a few little tidbits I've found and been saving for a little info dump. Enjoy!

As a huge fan of Richelle Mead's Vampire Academy series—anyone else dying to get their hands on Bloodlines?—I was stoked to see it mentioned. As a teen I was heavily overprotected by my religious zealot parents so I missed out on the growing vampire phenom of the 90's (no TV, music, movies or un-parent-approved books will make for some strange conversations later). I'd always been interested in them so it wasn't until I was an adult that I was able to explore the world of vampires (or any other fictional creatures I was also interested in).

Now I see I would have been more than mildly obsessed if I'd been allowed to partake as a teen. Have I ever mentioned my first date with my now husband was to see Blade? What about you guys? When did your fascination with vampires really start to flourish?

I know I've mentioned it already but for Christmas I received a Kindle. The guys were bummed I had guessed what my gift was but considering the budget alotted to each person's gift it seemed the obvious choice. Everyone has their reasons for loving or hating the idea of an ebook reader. My debate went back and forth considerably. In the end the biggest thing (aside from afforabiliy) that kept holding me back from even wishlisting one was lendability. I like to share my books with friends so not being able to let someone borrow a book was a big downside. But the Kindle and Nook (not sure about others do have lending options now. So I decided to look into how they work now that I have a reason to be thinking about it. 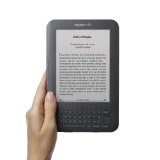 Jane of Dear Author put together this really slick guide called Digital Lendeing: How it works and who allows it. If, like me, you happened to get a Nook or Kindle as a holiday gift or you already have one and want to know more about this feature I suggest checking the post out.

Because of my limited reading time I don't think I'll be "borrowing" any books but I may be able to lend. Not sure if it's possible to lend from Kindle to Nook so my MIL and I may be screwed there with our opposing factions but I'll ask around about it when we're both a bit more comfortable using our ereaders. If you don't have an ereader and price were a non-issue would this hold you back to?

I've only in the last few months broken down and given ebooks a chance. Reading on my computer(s) has never been enjoyable or comfortable so the ereader does win out there. But this year I am making a serious effort to start sampling ebook-only authors and pubs. So far I've been really surprised at the quality I've found from publishers like Carina Press

. If you know of any series that you loved by authors who are doing the ebook-only thing let me know about them please!

And while I've got ya on the hook about ebooks I wanted to share some links for Kindle format ones I found for $1.99, with the MMP formats in the $7-8 region I thought you may want to take advantage!

I highly doubt these great low prices will last for a very long time. Already one I saw just two days ago and was going to add to this list went back up to regular price! So if your budget permits and you want one of these I suggest getting it now before this bargain is gone. 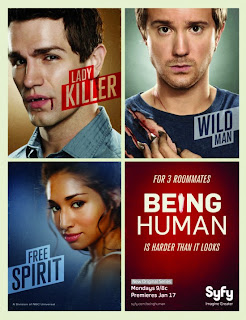 And last, but certainly not least, anyone else looking forward to Monday the 17th of January? I know there are a bunch of haters online bitching about remaking a Brit show that they could show here in the states but it's not like that hasn't worked out very well before. I don't watch it but I've heard the American version of The Office is way better than the British one. Why couldn't Syfy's Being Human turn out to be good as a remake? Just sayin'... sheesh haters you make my head hurt with your whining-before-you've-even-seen-it bullcrap. Anyways... although I have no idea who the girl is I liked Sam Witwer on Smallville and Sam Huntington was great in Detroit Rock City and Fanboys so... I made sure this won't interfere with my Castle and Pretty Little Liars schedule. (Starting to really hate Monday nights 'cause I'm not a big TV watcher but hell... 3 shows in one night?).

Who's gonna watch with me? Anyone seen the Brit version? Well here's the newest promo I could find, enjoy and if you're gooing to watch let me know. I need someone to gush about it with!

I am looking forward to Blooflines, though I will miss Rose and Dimitri taking center stage... hehe

I dont like the time frame for borrowing ebooks either =/

ooooh I didnt know they were making Being Humean for the US, awesome! I havent gotten a chance to watch the UK version...

I think that Im totally for making an US version, specially since most times the UK version doesnt last very long... the original The Office was great, but it lasted so short...

the US version is not better, I think it has turned into its own show apart from the UK one and this one is AMAZING!

I still need to read Spirit Bound and Last Sacrifice to catch up but I've never liked Dimitri so I kind of hit a point where I didn't really care anymore. lol

That is an excellent point Larissa! I was snooping around Twitter about Being Human and what people thought and there were soooo many haters that were Brits and I kept thinking "why can't both versions be awesome?" I mean conceptually they could certainly be the same but our cultures are different enough they could take the US version and make it its own show really. Then it's like getting two enjoyable (hopefully) shows! How can that be bad?

I guess I think of it like how they do spinoff shows. Like Angel... I didn't like the Angel character so I thought it would suck but it actually (aside from one season which I thought was horrid) was pretty entertaining.

Thanks for sharing your two cents! :D